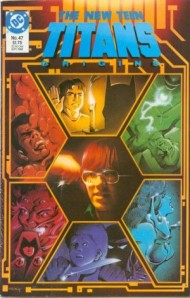 Open New Titans #85 to the letters page and tucked among the correspondence and editorial comments is a letter from two kids from Sayville, NY.  The contents of the letter are more or less forgettable–the two guys talk about how awesome they think the Teen Titans are, they ask why issue #80 had no letter column, and then make a prediction about the Vigilante coming back–but they sign off with something that seemed to get the editors’ attention:  PLEASE KILL DONNA TROY.  To drive home the point, they referred to themselves as the “PEOPLE FOR THE DEATH OF DONNA TROY.”

I don’t honestly remember which one of us came up with the idea that Harris and I should write in clamoring for the death of Donna Troy, but I do know that we really didn’t want her dead and the true reason was that we thought that in order to have a letter published, we should come up with a gimmick.  Donna Troy became the target because she was going to be the focus of the next big storyline, and we figured that they’d already screwed with every other member of the Titans, so why not her?

I think that’s what the powers that be on the Titans were thinking at the time as well, because if you look at every issue since New Titans #71, Donna wasn’t really affected because for the most part she was shuttled off to an adventure with Wonder Woman and then War of the Gods before being around at at full strength to take on Jericho and the Wildebeests.  But, is the fact that she really didn’t have much to do during the Titans Hunt enough to warrant focusing an entire three-book crossover on her?

Donna Troy, a.k.a. Wonder Girl, a.k.a. Troia has a very long origin story that the blog Titans Tower goes into pretty well and that I won’t rehash, but that definitely parallels my experience as a Titans fan and a comic book reader.  When I began reading the Titans, I was all about Nightwing, mainly because i was really into Batman, and I really didn’t care much about the fact that the team had been completely decimated.  I loved the book because it was action on top of action on top of action and that was awesome because I was fourteen and even I fell prey to crap like Bloodstrike. 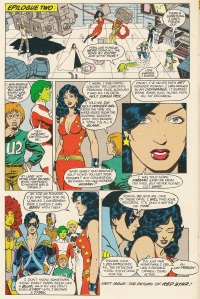 As I got older and collected all of the Titans back issues, I actually began to appreciate the characters in the book and looked for more than big guns and huge tits in my comic books, which meant that I was enjoying the writing and character development, and her two most important stories before Total Chaos are rich in both, even if one of them does have its fair share of intergalactic fury action. The first, “Who is Donna Troy?” appeared in New Teen Titans (1980) #38 and the second, “Who is Wonder Girl?” lasted from New Titans #50-54 with an epilogue in issue #55.

Now, “Who is Wonder Girl?” hit at a very good time for this title, which was in 1989 when the baxter New Teen Titans series hit #50 and Marv Wolfman reteamed with George Perez to breathe new life into a book that really had stalled since the end of Crisis on Infinite Earths a couple of years earlier.  Wolfman had set the table for the “Who is Wonder Girl?” storyline in issue #47 when he’d done a special origins issue and Wonder Girl told Danny Chase that she really didn’t know how she got her powers–one day, she was rescued from a burning building, the next she was fighting alongside the Teen Titans.  In fact, she said that she’d never even met Wonder Woman.

Of course, anyone who had been reading the title for years knew that this was a post-Crisis retcon based on the fact that when George Perez started writing Wonder Woman in 1987, he placed her first appearances in the DC Universe a number of years after that of Superman, Batman, and other herioes.  But since Perez was coming back to the Titans with issue 50, he would also be able to rework Donna Troy’s origin without scuttling what he and Wolfman had done a few years earlier.  I didn’t know this the first time I spotted issue #50 but there was a special gold border around the issue’s cover as well as similar borders for this storyline, so I knew that this had to be a big deal.  I wasn’t in my usual comic shop at the time.  My mother had dragged me to Huntington to go to Marsh’s clothing store in order to buy slacks and I happened to spot a comic book store and baseball card shop down the street. 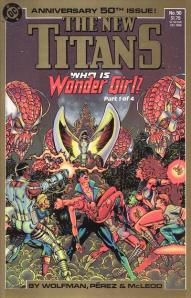 The cover to New Titans #50, which pays homage to the first page of the first issue of the original New Teen Titans series.

Slacks.  The mere sound of the word makes me itch.  My mother had a habit of buying formal clothes that were always slim fit and were made of some very synthetic and very strong gray–they were always gray–material.  So not only could I got skidding down the street and not rip my pants, my testicles were in a vice grip.  I’m pretty sure that slacks could have been purchased at a department store but for some reason we never went to Macy’s or even Penney’s, we went to random places.  For years, that place was Lad & Lassie, which was on Main Street in Sayville but had closed down by the end of the late 1980s because … well, honestly, does anything good ever come out of a store called Lad & Lassie?

Anyway, since Lad & Lassie was no longer, my mom schlepped me all the way to Marsh’s and afer spending my time trying on slacks, I convinced her to walk me down to the comics shop and I walked away with most of “Who is Wonder Girl?”–except for issue #51, which wasn’t in their bin but was available through the Mile High Comics catalogue.  The five issues, plus #55 wherein Donna ditches the Wonder Girl identity and becomes Troia, complete with new costume and short haircut, are a solid multi-part origin tale that makes sense and I suppose if I had been a longtime fan at that point I would have excitedly going to Amazing Comics (or as Harris and I had come to call it, “Chez Bob”) each month and eating it up like crazy just like we were with Titans Hunt.  But I came in a few years later and while I do have this story, I’ve only read it in full a few times. 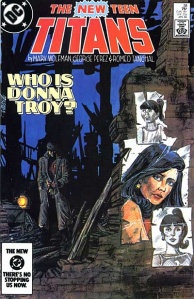 “Who is Donna Troy?” however, is one that I have read several times over and that’s not just because it is a single issue.  It’s a rare super hero origin story in that it only lasts that single issue, but also doesn’t involve a fight or a “Luke, I am your father” moment.  We, at this point in the pre-Crisis DCU know how Wonder Girl got her powers–she was rescued from a burning building by Wonder Woman who took her to Paradise Island–but we don’t know anything who she was before that.  Neither does she.  Since the fire was at an orphanage, Donna has no record of her parents.  Over the course of the issue, Robin takes the case and she discovers who she is.

I won’t spoil the story because it’s worth tracking down and reading on your own, but “Who is Donna Troy?” stands as one of my all-time, top five single issues of a comic book because it shows how well-written comics can be.  Furthermore, it shows a maturity in super-hero books that I didn’t come to appreciate until I was older than fourteen, which is when I bought the issue at “Chez Bob.”  Back then, I’d only bought it because I was accumulating Titans books and this one was cheap in his back issue bin, so I read it and filed it away with the others.  But since then, whenever I’ve read through my entire Titans run, I find that it’s one of the highlights.  The way Dick Grayson simply takes on a mystery is well-crafted, and it’s hard not to feel the full emotional impact of the story’s climax.  I’ll fully admit that there are times when reading it and the moment comes when Donna pulls her car around the corner and I could get choked up if I wanted to. 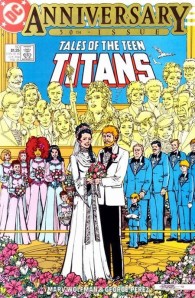 If you ignore the 1980s fashion and Terry Long, Tales of the Teen Titans #50 is another great non-action Wolfman/Perez Titans issue.

The coda to this story was very nice as well.  In Tales of the Teen Titans #50, Donna married her longtime boyfriend, Terry Long (I won’t get into whether or not I liked the relationship and will save that for later on) in a double-sized wedding issue that had one of those really cool “Anniversary” banners that DC’s big anniversary issues used to have back in the day.  What’s unique about this particular super hero wedding is that save for an interlude with Raven emoting about how Trigon is taking her over (although this came out around the same time as the Raven/Trigon storyline in the first issues of the baxter series, you have to read the original series up until issue 58 and THEN start reading the baxter series.  Yeah, I know), nothing happens.  No villain attacks, nobody goes crazy, nobody kills anyone.  They simply … get married.  It’s a pretty nice testament to how much the creative team cared about their characters.

If Nightwing is the brain of the Titans and Raven is their soul, Donna Troy is clearly their heart.  When the Teen Titans show up from the future to kill her, they intend to inadvertently strike a very tough blow to the team from which they may never recover.  Then again, they’ve survived worse.

Next Up:  Total Chaos.