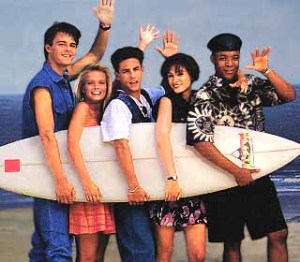 You know, I was all set to write about something else (specifically, Commando) when of all people, Jimmy Fallon completely knocked me on my ass.  More specifically, he inspired me … and while you probably don’t know much about me, I will tell you that I am not easily inspired.

I cannot express how awesome this made me feel when I was surfing around the internet last night and came across the reunion video.  Watching it, I get that there’s a huge joke going on here — Fallon is definitely doing this for the silliness of it all (oh, and because he couldn’t reunite the cast of Saved By The Bell) and when they are performing the cast has a “Man, this was so lame” look on their faces.

And yeah, when it was first on television back in the early 1990s, it was kind of lame.  Airing on Saturdays in the late morning (around noon or so, I think) after SBTB, California Dreams was the story of a group of teenagers that had a rock band.  In fact, the show was created by Peter Engel, the same guy responsible for SBTB, who probably saw an opportunity after the show became popular and aired that Zack Attack episode.

The first season, which began in the fall of 1992, was almost like a family sitcom.  While the band was a big part of every plot, the stories often dealt with the problems of the Garrison family, whose Matt (Brent Gore) and Jenny (Heidi Lenhart) were the lead singer and keyboard player of the band.  Rounding out the California Dreams were Tony (William James Jones), the drummer; and Tiffani (Kelly Packard), the bass player.  They also had a “manager” in Sly (Michael Cade) who was a slick, “smooth-talker” character that did his best to get the band work and hopefully a record contract.

Quite a few of the episdoes centered around Jenny and Matt, and their parents played a decent part, and Sly was often written as a combination of Zack Morris and Screech Powers — he was always slimeballing over Jenny and having his ridiculous schemes backfire on him.  This seemed to be the more popular part of the show because by the second season, there was another band member, Jake (Jay Anthony Franke) added and the Garrison parents were gone.  In fact, Jenny and Matt were both written out of the show by season three.

I was 15 in 1992.  Most of my Saturday mornings were spent sleeping in until 11:00 and then figuring out whether or not my dad was going to drive me across town to play roller hockey or if I was going to have to ride my bike all the way up to the pickup game we had going on Swindon Row.  Normally, I would leave around noon, but that fall I found myself leaving the house at 12:30.

Inexplicably, by the way.  I mean, I never really watched Saved By The Bell during its actual Saturday morning time slot — most of my experience with the Zack Pack was through the reruns on WPIX every afternoon.  But the theme song just drew me in.  Okay, that and Heidi Lenhart, who was second teen-show actress I wound up having a crush on when I was a teenager (the first was Stacie Mistysyn, or Caitlin, on Degrassi High).  One particular episode that I had actually taped and watched at least more than a few times featured Sly hiding under Jenny’s bed and listening in on all of her secrets, then using those to get with her.  In the end, she winds up finding out and gets him back by inviting him over for dinner, wearing a dress that looked like it was a cast-off from a recent Warrant video, and dumping hot soup in his lap.

Yeah, it’s a lot like that SBTB episode where Zack bugs Jessie’s sleepover party to find out what Kelly thinks about him. Then again, I wasn’t watching that episode over and over again for the plot.

I did find myself strangely attracted to the music used in the show.  I mean, it was harmless soft rock, and the “videos” that were shot for the first season when the band performed in each episode were right out of Beverly Hills, 90210 or The Heights.  Thanks to my sister, who knows the value of a good Saturday morning teen television show, as she was often my accomplice in watching California Dreams, I have a copy of the show’s soundtrack.  She gave it to me as a gag gift for my birthday a few years ago, along with the Saved By The Bell soundtrack, a CD she labeled “Ultimate Cheese!”

The SBTB soundtrack is obviously the cheesier of the two, but I have to say that listening to it (which I am doing while I write this), I definitely value the Dreams portion more.  Then again, I always wanted to own the album ever since I saw it in the Record World store at Sun Vet Mall when I was about sixteen and had just gotten my first CD player.  I would pick up the album, in its long cardboard box, and glance at it before my friends dragged me to a more legitimate section of the store: metal, alternative, or something cooler than Saturday morning soft rock.

But how can you go wrong with lyrics like, “Love is not like this/love is not like no, no, no/Love is not like this on the radio” or song titles like “Castles on Quicksand”?  This band provided the perfect soundtrack for an entire generation’s teenage fantasies of being in a band.  Okay, a teenage piano player’s fantasies of being in a band, because when you play that particular instrument the only other Battle of the Bands option is maybe a Billy Joel/Elton John cover band (with a misguided “Bohemian Rhapsody” cover thrown in for good measure).

As far as I know, absolutely nobody who went to my high school watched California Dreams, and if they did, they weren’t admitting it.  It wasn’t until I went to college that I found a group of people who not only had watched the show when it was on but were willing to admit it.  They were two of my fellow editors on the staff of my college newspaper, The Greyhound.

Of course, that made total sense, as it takes a certain amount of insanity to be an editor on a campus newspaper.  Jackie was the news editor and her claim to fame in the office was leaving her laundry in there for what seemed like weeks on end after she’d retrieved it from the Wynnewood Towers East laundry room, which was right around the corner from the office.  Mike was one of the features editors and seemed to really like sleeping on the incredibly uncomfortable couches in the office conference room.  He also had a small collection of cassettes, which included various ’80s compilations and Debbie Gibson singles.

One particular Debbie Gibson song, “Lost in Your Eyes,” became the ‘Hound‘s unofficial theme song during my junior year.  There were way too many Sunday afternoons when we would put that song into our shitty boom box and blast it across the office, then play “guitar” with T-squares in the same way the kids on California Dreams would.

Hey, if you were hung over or had just come back from a weekend at your girlfriend’s and were faced with doing layout on an always-crashing Mac, you’d be jamming to Debbie Gibson, too.

Much like Ms. Gibson, California Dreams faded into pop culture trivia pretty quickly, although my posting the Jimmy Fallon video to Facebook status did get an enthusiastic “Thank you. Thank you. Thank you.” from Jackie.  It’s nice to know someone else wants to lay here in the sun … until my dream is done.