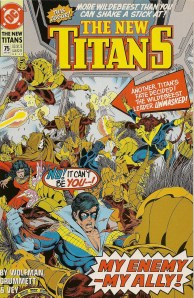 When I began reading the Titans Hunt storyline, I wasn’t a novice at comic book collecting.  True, I had just started picking up comics on a rgular basis, but prior to 1990, I had been a reader of G.I. Joe and was often seen raiding Amazing Comics’ back issue bin.  Therefore, I knew that the characters had histories and there were probably very important stories that had already been told.  But it would take a while to really get there.

As mentioned in my last entry, I bought New Titans #71 and devoured it and then picked up issue 72 as soon as it came out.  With a dead Golden Eagle and nearly dead Aqualad on the cover, this was one of those great “shocker” issues that showed longtime Titans fans taht whomever was behind the Wildebeests was deadly serious because they were not only hunting down the “core” members of the team but secondary and ancillary members.  In October 1990, I still had no idea who these people were, although I knew it wasn’t very often that heroes died in comic books and in such a brutal fashion (Golden Eagle is essentially hanged when the Wildebeest’s rope/wire is wrapped around his neck, then is pulled to the ground and beaten to death).  By the end of this issue, we know that Troia is not captured and that there is more than one Wildebeest. 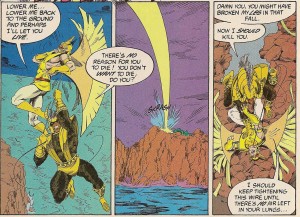 Then, well, I couldn’t tell you much, at least in 1990.  I believe that shipping problems resulted in issues 73 and/or 74 being late and I didn’t see them and maybe forgot about them because at the same time a new Robin was being introduced in Batman and that was a huge deal (I had the Neal Adams poster on my wall), plus he got his own mini-series.  And Superman had just gotten engaged, too, so Deathstroke’s hunting for the Titans was put on the back burner while I focused on that as well as collecting Crisis on Infinite Earths.

New Titans #73-76 would actually elude me for a number of years, and I probably wouldn’t have read them at all if Harris hadn’t run into me one day on the main stairs of our junior high school and told me that the leader of the Wildebeests was Jericho.  That’s right–the most unassuming Titan and the son of this story’s protagonist was, for some reason, hunting down all of his teammates.  The next time I went to his house for my piano lessons, I read all fo the issues I had missed and picked up the next issue available, #77, which took place mostly in Siberia.

So how does one storyline go from Manhattan to the USSR?  Well, in the span of what amounts to roughly a couple of weeks, Deathstroke tracks the Wildebeests to Washington, D.C., where they attack and apparently Danny Chase, a telekinetic Titan who had been fired from the group after Jason Todd, the second Robin, was killed in Batman #427-428 (Chase was annoying as hell and no fans liked him anyway).  Then, mysteriously, a “ghost” named Phantasm shows up, followed in the next issue by Pantha, a half-woman/half-feline who had apparently been the subject of Dr. Mengele-type experiments by the Wildebeests, who refer to her as “X-24.”

Apparently, she was the only successful experiment because one of the Wildebeests seems to be very curious about what is going on and actually asks the main scientist some questions.  This arouses suspicion to the point that he starts being chased and once he’s cornered and captured, he’s unmasked to reveal that he’s actually Nightwing.  It seems that Dick Grayson had subdued his original attacker and taken his costume and since issue #71 has been undercover among the Wildebeests.  Soon enough, however, he’s brought before the enemy leader and in a classic “YOU!” moment worthy of the Marvelest of Marvel, discovers that Jericho is the big bad for this storyline.  At this point, a huge fight ensues because Deathstroke shows up with Raven’s mother, Arella, and Pantha and Phantasm follow.  Jericho launches a huge group of rockets and presses a button, which activates a self-destruct.  Our heroes manage to escape to Titans Tower (which, btw, is a big building shaped like a “T” on an island in the East River), track the exploded rocket to Russia, and then narrowly escape the Tower’s destruction. 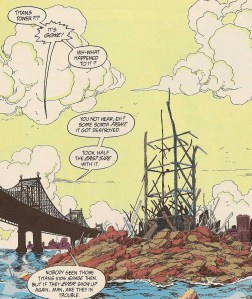 What's left of Titans Tower, as shown in New Titans #78

Issue #77 also slows things down a little as we discover that Cyborg was in the rocket and Red Star, a Russian hero and Titans ally, brought him to a secret Soviet installation where he was rebuilt (they had the technology).  By the time we head toward the three-part Titans Hunt conclusion called “The Jericho Gambit” (yes, not the best title for that), we learn that Jericho may or may not be possessed and is going to use the Titans for some sort of “transference procedure,” which begins at the end of #78 and doesn’t really pick up again until #82 (we’ll address #79-81 and Annual 7 in a few months) with the first part of “The Jericho Gambit”.  And it seems that because the editors and writer decided to name the finale, you can divide the Titans Hunt into three separate parts: 71-75, 76-79 (and parts of 79), and 82-84.

Just as New Titans #71 hit at a good time, issues 77-79 came at a great time for me as well, because I was reading them in the summer, a time when I could get lost in books and movies and comics without worrying about homework or a bedtime or anything liek that.  Plus, because I spent once a week at Harris’s house reading comic and playing video games, I had someone else to read the issue with and we both got really into the book to the point where we would write letters.  Plus, the creative team was firing on all cylinders, from the story’s pacing to Tom Grummett’s artwork, to the Stan Lee-esque covers. 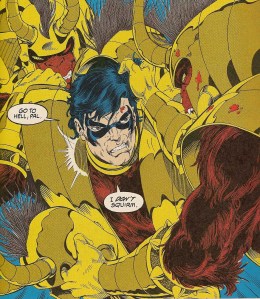 Nightwing is discovered and captured in New Titans #74

I know that this particular era of New Titans is a bit controversial, especially because it shakes up the status quo, does away with several long-standing team elemetns, and lead to some less-than-spectacular issues (especially the ones immediately following the Hunt’s conclusion), but they kept me and everyone reading and sold well enough that #73-76 becamse a huge pain in the ass to find in back issue bins.  In fact, I probably overpaid for #73, 74, and 76 when I bought them through Mile High Comics.

But New Titans #75 had a special place in my comics collecting history.  Not only did my running into Harris on the stairs that day int he eighth grade get me interested egain, but it was the last issue of Marv Wolfman’s sixteen-year Titans run that I needed in order to complete it.  By 1999, I had managed to accumulate every single issue of New Tteen Titans/New Titans (with the exception of the Tales of the Teen Titans reprint-era issues) from DC Comics Presents #26 in 1980 to New Titans #130 in 1996.  Except, that is, for three: New Teen Titans (1984 series) #49, New Titans #75, and the New Teen Titans/Uncanny X-Men crossover (which I had in a trade but not in a comic).  Mile High Comics, which was my back issue backup plan, was asking too high a price for or didn’t have the issues in stock, and it had been years since I more or less cleaned out all of Bob’s Titans backstock.  This time, however, I had what I didn’t have when I was in junior high:  a car. 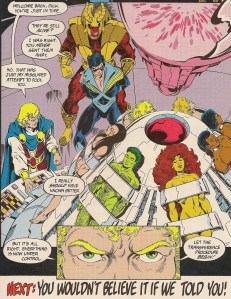 The "transference procedure"? We'll have to wait a few issues to find out what Jericho is up to. New Titans #78.

I opened up the yellow pages and searched for comic stores in a nearby area.  Within twenty minutes, there were three:  Sun Vet Coin and Stamp, which I’d shopped at before; a store in Patchogue near Swezey’s whose name I can’t remember; and Tor comics, which was on Waverly Avenue in Holtsville.  Sun Vet Coin and Stamp yielded nothing and I found the X-Men crossover at the unnamed Patchogue store.  Tor was on a pretty busy street but seemed to be in the middle of nowhere, a comics oasis that had so much stuff on the walls I was nearly overstimulated.

That’s kind of dangerous when entering a comic store, or any store for that matter.  If you don’t have anything specifically to shop for, you may wind up finding yourself distracted to the point of indecision, spending hours looking around and walking out ultimately unsatisfied.  However, I knew exactly what I wanted and I dove right into the Titans back issues.  Issue #49 was only going to cost me a couple of bucks, and I set it aside as I flipped through the other covers, so many of which I had opened many times in order to read there stories.  And there it was: New Titans #75, selling for a cool $3.50.  I took it to the register, got in my car, and put the two comics among the piles of Titans books I had taken out before embarking on a few days of reading every single issue in order.  It was, in a huge way, a triumph, and the last great moment I had as a collector.