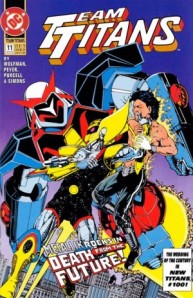 With about a year on Team Titans under his belt, Marv Wolfman left the title he started with Total Chaos to spend his energy on the goings-on in New Titans and Deathstroke: The Terminator.  In interviews about this particular era, he’s said that he really doesn’t even remember writing this book for an entire year and doesn’t seem to be a big fan of the characters; obviously, Woflman doesn’t think that his year with the Teamers was his best work.  It’s kind of a shame, too, because the main Titans title was suffering a little bit at this point and while Deathstroke’s “World Tour” storyline was about to get going, those were books on my pull list that I read after everything else, especially considering both Knightfall and Reign of the Supermen were going on, and Team Titans was the one book in that family that I was attached to.

Looking at the last three parts of Wolfman’s run (two of which were merely plotted by Wolfman and scripted by Tom Peyer), I can see where his heart wasn’t in it and how a new creative team might be able to do a little more with the characters because some of the story elements seem a little forced.  Take, for instance, the two-parter in Team Titans #11 and 12, which came out around June 1993 and heavily featured Metallik, the Voltron-esque Titans team that we’d been introduced to in the immediate post-Total Chaos issues.  The premise of the two-parter was that a robot was sent back in time to eliminate the Team Titans, and immediately goes after a lone Teamer named Sunburst before Metallik gets in on the action and eventually our main team of Titans joins in the fight.

It’s kind of a throwaway story, to be honest.  The robot comes in all Terminator-style, winds up killing Sunburst (which pisses off the girls of Metallik because they think he’s cute) and eventually meets his end when Kole shows up again and augments Kilowatt’s power in order to destroy it.  There’s also some subplots that are continued, one being an attempt to give Batallion depth as he tracked down and pretty much stalked the woman who was his wife in the alternate reality from whence he came.  He scares the crap out of her (well, who wouldn’t be scared if they were being constantly followed by some guy with a huge mane who is armed to the teeth?) and then realizes that he can’t be with her and is going to be alone in this world. I think I’ve said before that I was never a big fan of Batallion because it was obvious that someone at DC wanted the Team Titans to have a “badass” character that could compete with Cable.

But Team Titans was never X-Force and was never going to be X-Force because even though Wolfman didn’t particularly like writing the book, he did his best to have the team in a realistic world, whereas X-Force always seemed to take place at scientific facility X or desert location Y.  The subplots that would continue past Wolfman’s tenure showed that.  Mirage dealing with the aftermath of Deathwing’s trying to kill her after he slept with her; the team’s overstaying their welcome at the Troy/Long farm; and the mystery of how many Titans teams survived the trip back from the alternate 2001 and how they fared were moved along here and would be be fleshed out more over the course of the next six months.  I especially liked, and still like the idea that not all of the teams did as well as the team we’re following.  Sunburst, when we’re introduced to him in issue #11, is the only one who survived the trip back (and wound up going back three years early) and was essentially homeless and waiting for the end.  Most time-travel stories with superheroes don’t have them get so banged up.

Wolfman ended his run with the first Team Titans annual, part of the much-reviled Bloodlines crossover, where aliens were feeding on people and turning some of them into superheroes.  In New Titans Annual #9, we discovered Anima in a rather forgettable story (though she did get her own title after that); in Team Titans Annual #1, we get Chimera in one of the better Bloodlines annuals, which was written by Woflman and features art by Art Nichols.   The team encounters the alien early with one of the few times that Dagon being a vampire that can transform into a man-bat really does look cool.  They take on the alien without Redwing, who is attending a high school dance as part of another attempt to fit in.  She feels like a freak and her one friend, Sanjeet, isn’t there to encourage her, so she flies off and is about to help the rest of the Teamers when she sees Sanjeet get into an argument with her father and take off in his car.

Carrie chases after Sanjeet and they run into another alien, who attacks her friend and puts her into a coma, during which it’s revealed that Sanjeet now has the power to make dreams become real and … well, deadly.  Part of this has to do with the attack and her powers, but it’s revealed that part of it has to do with the fact that Sanjeet was doing drugs in order to cope with her father’s abuse.  So what you get here is very much a psychological drama as it is a superhero story, but with the psychological part literally coming to life.  When it appears that Sanjeet and the Team Titans are adversaries, she forces them to face some of their greatest nightmares (Mirage, for instance, is forced to relive time as a whore for Lord Chaos and his troops).  Eventually, they talk her down and Sanjeet faces off against her father, who is eventually arrested. 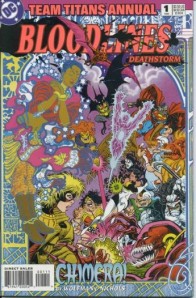 Now, it’s a bit like one of those “very special” episodes where there’s an issue and we all learn a lesson after our heroes solve their problems, but Wolfman made the Chimera character one that is more personal than some of the very forced heroes we were getting out of the “new blood” that DC was trying to position as the next big thing (read: they really needed to compete with Marvel and Image), and to be honest, even though Anima did get her own series, the only character worth anything to come out of this particular crossover was Hitman.  And if this hadn’t been part of a crossover, it could have worked on its own because Sanjeet’s powers trapping her in her own world and manifesting her torment were very similar to what Wolfman and Perez had done in “The Possession of Frances Kane” back in the early 1980s.  Plus, the team may have been heroes by at least giving them a shot at a true teenage problem was worth it.

Next Up: Deathstroke goes on a World Tour.