Lisa practices acting like a teenager in "The Summer of 4 ft. 2."

When my yearbook staff puts the finishing touches on its last deadline, we have a few traditions.  First, we take the ladder–a poster-sized “map” of the yearbook–and pass it around the room, each staff member tearing it until it’s completely shredded.  Second, we have a pizza party.  Third, we watch the Simpsons episode “The Summer of 4 ft. 2.”

If you’re unfamiliar with the episode, I don’t blame you.  It originally aired on May 19, 1996 and along with the star-studded episode “Homerpalooza,” capped off season 7 of the series, which means that it was an episode from back when the show was not only good but amazing.  Flipping through my copy of The Simpsons: A Complete Guide to Our Favorite Family, I see that season 7 is incredibly strong: “Bart Sells His Soul,” “Radioactive Man,” “King-Size Homer,” “Team Homer,” and “Bart on the Road” are just five episodes in a year packed with gems, and I have to say that I have to consider myself lucky because this particular year (1995-1996) was when I first started watching The Simpsons on a regular basis.

You see, I actually wasn’t allowed to watch the show when it first premiered in 1990.  Not right off the bat, anyway.  I remember watching the first regular episode (not “Simpsons Roasting on an Open Fire” but “Bart the Genius”), but when the show took off and the merchandise started hitting the shelves, my mother didn’t think that the image of Bart Simpson holding a slingshot and proclaiming he was an “underachiever and proud of it” was a good image for her kids.  Therefore, me–the 13-year-old–and my sister–the 10-year-old–were forbidden from watching The Simpsons.

Now, let’s think about this for a minute.  I had spent the better part of my childhood watching festivals of violence–from Tom & Jerry cartoons to Commando.  I was also a straight-A student who never got into any trouble at school.  How a cartoon character that was about as harmful as Dennis the Menace was going to make me rebel in some way was completely beyond me.  So I was stuck watching The Cosby Show instead, at least until the beginning of season two when I was able to watch “Bart Gets an F” because it was about that underachiever trying to achieve; and then wound up catching most of that and the next season.  Then my viewing fell off as I became more involved in school and found myself spending most of my nights holed up in my room doing homework or listening to Rangers games on the radio. 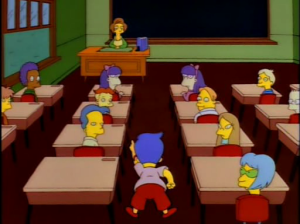 Catching up wasn’t hard, though, as season seven was my freshman year of college and I was rooming and friends with people who really enjoyed the show, although I know that I watched this episode at home because it aired after the year was over.  The attraction that evening was “Homerpalooza,” which featured The Smashing Pumpkins, Cypress Hill, and Peter Frampton as guests in a plot where Homer becomes part of the traveling sideshow in a Lollapalooza-type music festival.  But “The Summer of 4 ft. 2” was a pleasant surprise that I’ve found holds up more than its companion episode, more than fifteen years after it aired.

Lisa is the center of the episode, as after nobody signs her yearbook (proving to her that she’s incredibly unpopular), she decides to use the opportunity of a family beach vacation to change her identity and makes new friends (one of whom is voiced by Christina Ricci), much to the dismay of Bart, who tries to sabotage said friendship by pointing out that Lisa was hiding how much of a nerd she really is.  Despite this, they still remain her friend and she learns that it really is worth being yourself.  It’s a sweet episode and I know that if my former roommates (and Simpsons companions) were watching it they would not say it was a favorite, but it’s definitely one of mine because of moments such as:

Bart gets the dud.

But despite Homer’s antics, which make for much of the out-loud laughs, the heart of the episode is Lisa’s transformation from geeky girl in a red dress to GenX-looking pre-teen, which is done so well.  In fact, she convinces her new friends that she’s older than Bart when the latter tries to impress the kids with his “rad” skateboard moves and they laugh him off as a Dennis the Menace wannabe who tries to hard.  Granted, Lisa in her new guise doesn’t have the cynicism of Daria (still one of my favorite cartoons from the 1990s) but you can see how the character still would have worked if they had decided to age her.  In fact, Lisa-centric episodes are often done very well because she is a voice of reason with a lot of depth to her character.

My staff’s reaction this year was a few chuckles (especially at “Sweet merciful crap!”) and a request to watch another episode (we wound up watching “Raging Abe Simpson and His Grumbling Grandson in ‘The Curse of the Flying Hellfish,'” an episode which once provided the name of one of my fantasy football teams).  Tradition’s great sometimes, I tell ya.