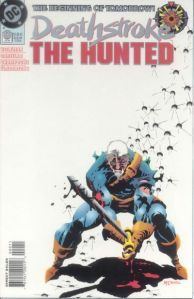 The 1990s take a lot of crap from comics fans and in all honesty a lot of that crap isn’t fair.  But there are times when the effects of the era’s attitude are clearly seen and seen for the worst, which is when an established character undergoes some sort of transformation to make him or her “edgier” or “extreme” or “more exciting.”  Post-Zero Hour, this happened to The New Titans, which had a new lineup and a whole slew of storyline and character changes that were mainly the result of interference from a new editor (though the title’s writer, Marv Wolfman, obviously shares some of the responsibility for how the book eventually crashed and burned) and this bled over into the other Titans-related comic of the time, Deathstroke: The Terminator.

Prior to the 1994 crossover event, Deathstroke had been chugging along and probably faced a fair amount of declining sales (I haven’t been able to find the actual sales figures) since its debut, or at least through most of the latter part of 1993 and into 1994, even though the title had been a pretty consistent read throughout its run.  But with Zero Hour came a new editor, Pat Garrahy, and therefore came a new direction because Garrahy, much to the chagrin of Wolfman and quite a number of fans (especially in hindsight) was obsessed with the idea of “shaking things up” to the point where he didn’t seem to care about getting anyone upset or completely contradicting that which had come before (read: the Terra origin).  In fact, I remember hearing a story about how he was once at a signing or convention and pointed out to a fan all of the characters he had killed … and seemed pretty proud of it.  Granted, this story was something I heard on a message board back in the early 2000s and is more than likely not true, but it is indicative of the attitude of many an editor and many a company in the early 1990s:  do something shocking or crazy so that your readers are sure to pick up the book.

Starting with issue 0, Sergio Cariello took over on pencils and stayed with the book for the better part of a year and a half as he and his brother Octavio took Slade to Hell and back and dismantled much of the book’s supporting cast in a drawn-out storyline that involved two mystery villains and several major deaths.  Garrahy had Wolfman writing in higher octane mode than he already had (read: now EVERYONE WAS YELLING ALL THE TIME BECAUSE THAT’S WHAT COMICS DIALOGUE WAS IN THE 1990s!  EVERYONE!  HAS! TO!  YELL!) and the Cariellos drew with a very fast-paced style that sometimes lent itself well to the storyline but other times seemed rushed, much like the issues that came out.

“The Hunted” is a Slade-on-the-run storyline that starts in the Zero Month issue with Deathstroke being chased by the United States government because he is wanted for the murder of a Senator, even though he knows that the person he killed was actually a terrorist disguised as the Senator who was going to blow himself up at a public appearance and the real Senator had been murdered by agents of the Crimelord, who is now in charge of the nation of Zandia, the former home of Brother Blood.  The Crimelord is a villain shrouded in mystery.  He talks to his operatives via video chat using avatars and sits in shadows smoking a cigar and petting an owl (because when you’re an international criminal supervillain you need to be petting some sort of animal), so we don’t know his identity and that is something that will be some sort of huge reveal at one point or another.

It takes a while to get to that point because the six issues that make up “The Hunted” are the “Deathstroke on the run” and “We’re going to destroy everything” part of all of this that is quite formulaic.  The Zero Month issue establishes the story and it’s kind of jarring because there’s very little connection between issue #0 and issue #40, which was a run-of-the-mill action yarn.

So, Slade is on the run from the government.  He gets captured.  He gets rescued.  The Crimelord acts behind the scenes and manipulates a lot of things.  There’s also a mystery villain who will come to be known as The Ravager (the third Deathstroke-related character with that name) and Slade’s ex-wife Adeline is completely insane and obsessed with killing her husband. 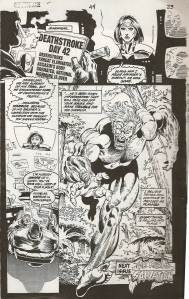 The last page of Deathstroke: The Hunted #44 from my preview copy.

No, really.  Basically each issue is Slade on the run, getting captured and/or killed (and it’s through this storyline that we learn that Wilson is basically immortal because he gets killed ALL THE DAMN TIME), someone from the supporting cast getting killed off, and a fight with a different hero or villain.  In issue #41, Bronze Tiger and Deadshot chase Wilson and while Bronze Tiger swears he won’t hurt Deathstroke, Deadshot has no scruples about it so Slade seemingly dies, only to wake up all after-Lazarus-Pit nuts for a little while at the beginning of issue #42 where he fights Guy Gardner: Warrior, Hawkman in #43, and half of Checkmate all the way until issue #45 when he is captured for good and locked in a secret government holding cell.

Meanwhile, The Ravager spends his time gunning down Squirrel, Frannie, and Maurice, who were all supporting cast members.  He tries to kill Wintergreen but Slade’s old friend gets away and seeks out Sweet Lili, who has a climactic encounter with the mystery villain that results in her driving off the side of a cliff while her daughter, Rose, watches.  This is something that will be important, albeit nearly a decade later when Rose becomes the fourth person to take the identity of The Ravager. 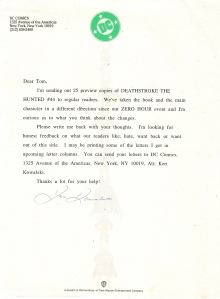 The letter I received from DC with a preview copy of Deathstroke: The Hunted #44. If you look closely you see the watermark of various super heroes holding up the DC bullet.

I have to say that I don’t remember reading these when I was getting them in high school (looking at what was out then, I was probably paying attention to the Batman books and I know that I was really into Mark Waid’s run on The Flash).  I’m sure I did, although if I was reading it I wasn’t really paying much attention because by the time the storyline’s finale would come around in issue #50 and Annual #4 I had to go back and read through all of the prior issues to figure out what was happening.  Funny enough, DC thought I really wanted to read it because in November or so of 1994 I received a photocopied preview version of Deathstroke: The Hunted #44 with a letter from assistant editor Keri Kowalski that read:

I’m sending out 25 preview copies of DEATHSTROKE THE HUNTED #44 to regular readers.  We’ve taken the book and the main character in a different direction since our ZERO HOUR event and I’m curious as to what you think about the changes.

Please write me back with your thoughts.  I’m looking for honest feedback on what our readrs like, hate, want back or want out of this title.  I may be printing some of the letters i get in upcoming letter columns.

Truth be told, I never got around to writing the letter, although my friend and letter-writing partner Harris did have a letter printed in Deathstroke #46 (by then the title would only be called Deathstroke), and most of the letters they printed seemed to be very positive, even if sales weren’t reflecting that.  Reading it again, time has not been too kind to it, even if the “hero on the run” storyline is actually a halfway decent idea.  But I can’t pass too much judgment on it until I finish it all up, so I guess we’ll see.

Next Up:  The conclusion of the Deathstroke saga as The Titans join in the fight and The Ravager and The Crimelord are revealed!