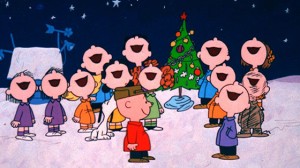 It’s the holidays and that means that at some point before Christmas Day my family and I will sit down and watch A Charlie Brown Christmas.  This has been one of my favorite Christmas specials since I was a kid and remains so despite my lack of regular church attendance or adherence to any religious code.  I happen to like the simplicity of the message and how Linus’s moment on stage is done in a matter that is straightforward and respectful.  Then, Linus and company gather around a Christmas tree that they have rescued with decorations and sing “Hark! The Herald Angels Sing”; the show doesn’t end with Lord of the Flies: War on Christmas Edition.

But for all of the nicety found in A Charlie Brown Christmas, there is one thing I cannot stand and that is the character of Violet.

One of the earlier characters in Charles Schulz’s comic strip Peanuts, Violet is the girl in the green dress whose main characteristic was that she was a snob.  She had quite a number of appearances prior to 1960 but as characters like Lucy, Sally, and Peppermint Patty began to be seen more in the panels, Violet faded into the background like a first-season sitcom character that is eventually written out of the show.  But since A Charlie Brown Christmas aired in 1965 and Violet was still in the early stages of her fade out, she’s still considered part of the gang and has about three lines, including:

“I didn’t send you a Christmas card, Charlie Brown.”

“Boy are you stupid, Charlie Brown”

“I told you he’d goof it up.  He isn’t the kind you can depend on to do anything right.”

As a kid, I more than likely didn’t pay much attention to those lines, choosing instead to focus on the antics of Snoopy and his mad quest for victory in a decorating contest.  But when my wife and I were in our twenties, we found ourselves having a visceral reaction to Violet’s lines.  She became, to us, the epitome of the snotty little bitch who contributes absolutely nothing to the entire scenario except nasty comments.

Yes, traditionally it’s Lucy who is the bitch in Peanuts, but if you look at the career of Lucy Van Pelt, you see someone who, while she is bossy and overbearing (after all, she insists on being the “Christmas Queen”), but also someone who has a certain quality about her that makes you want her to like you even though you also kind of hate her.  Violet, however, is just all hate and a character you can’t feel anything for beyond seething rage.  In other words, if Lucy’s Heather Chandler, Violet is Heather Duke.

The resemblance is uncanny, trust me.

Before she does a faceplant into a glass coffee table, Heather Chandler is worshipped at Westerberg High and she’s only a junior.  She leads the most popular clique and is the queen of the school and even though I’m sure there are plenty of people who loathe her, most of that loathing is done in secret (yes, J.D. and Veronica but they’re the deadly exception to the rule).  This is because Heather Chandler is manipulative and has enough natural charisma to be a bitch with flair.  Lucy does this as well.  Oh sure, she’ll pull that football away from Charlie Brown at the last second for all eternity, but she also spends time in her counseling booth helping him figure out his phobias.  She’s manipulative and actually has people relying on her for support.

But when Heather Duke takes over, she is not finesse; she is brutality.  She bulldozes her way through Westerberg in a way that is so uncouth that she leaves destruction in her wake–and if J.D. had his way that would have been quite the literal path of destruction.  Violet does not seem to do anything but insult and  since the hero of the show is Charlie Brown we are led to believe that she does not change all that much as a result of the nice thing all the kids do for him.  Oh sure, she sings with them but it’s clear she’s just going along because everyone else is.

In other words, there is no redemption for Violet and she is and will always be the scourge of the holidays.