The cover to the 1994 Regents exam in English.

Had the events of the evening of June 17, 1994 not proceeded the way they did, i am sure that I would have remembered the day anyway.  It wouldn’t have had the national significance that it does; still, it’s not every year that the Rangers get a ticker tape parade because they won the Stanley Cup.  In fact, that day wound up marking the end of two significant periods of my life hours before O.J. and A.C. managed to take the Los Angeles Police Department and every television station in the country up the 405 for 50 miles and a few hours.

At 8:30 that morning in the Sayville High School gymnasium, I sat down to take my English Regents.  This was both the culmination of three years of novels, plays, literary essays, and compositions at the hands of my English teachers as well as the very last Regents I would have to take.  That may not seem like much, especially to people who did not grow up and attend public school in New York State, but those who did know exactly what I mean when I say that I considered the end of my Regents-taking career to be a cause for celebration, if however minor.

Regents were what kept us in school until late in June (well, that an starting after Labor Day and having a week off in February) and were a ritual for high school students since the New York State Department of Education started them way back in the 1930s (a quick look at the archives, shows tests on homemaking in the 1950s and 1960s).  Coming sealed in plastic and bearing titles like “The University of the State of New York Regents High School Examination Comprehensive Examination in English,” the tests were more than a rite of passage–they were one of the most important rituals of our academic careers.  Starting after Easter, our book bags were further weighed down with Red Barron’s books full of old tests, which we’d take and then pore over to see what we were doing right and what needed improvement.

And English wasn’t particularly hard, although I’m sure my students would blanch at the sight of it.  Whereas current students in Virginia take SOL exams in reading and writing that are passage-based and have one simple five-paragraph prompt-based persuasive essay, my generation had to endure spelling,  definitions, two essays (a literary analysis piece and a composition), and a listening section.  That’s right–a portion of our test required us to sit and listen while our teachers read a passage and we had to answer multiple-choice questions based on what we heard.  I’m sure that such a concept would send today’s average anti-testing advocate/expert into a blood-vomiting rage.  Personally, I never thought twice about it, but then again I was one of those students they’d accuse of having Stockholm Syndrome or something because I dutifully took my Regents exams and did well in school.

Anyway, I remember chugging through the multiple choice, choosing one of the two literary essay prompts (which have both made their way onto my 10th grade advanced English final in recent years) and writing a composition that I think I titled “Notes From a Rest Stop on the Information Highway.”  It was my attempt at wit, I guess, and it seemed to work because I did well enough to continue on my path to graduating with honors a year later. 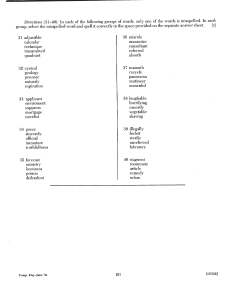 A page from the spelling section of the 1994 Regents English exam.

I wasn’t thinking of any of that while taking the test, of course, because the Rangers parade was going to be on television and the Regents exam was the only reason I hadn’t asked my parents if I could take the train to the city that morning (same could be said for my friends as well because we all had to take the Regents).  So like everyone else, I watched it on television.  To this day, the Rangers hoisting the Cup as they drove through the Canyon of Heroes followed by the presentations at City Hall seem surreal.  I wasn’t wearing my jersey–I had finally thrown that in the laundry after superstitiously refusing to wash it throughout the playoffs–but I was glued to my television set the way I was eight years earlier when my dad taped the 1986 Mets parade for me.

The Rangers hoist the cup on Broadway.

Of course, the television would be more important later that night.  But I didn’t know that; did anyone?

Stone Temple Pilots were supposed to appear on Letterman.  I don’t think that’s why I stayed home, but at some point in the afternoon, I made a mental note to stay up late and turn on The Late Show after I was done with whatever Friday night plans I had made–which, knowing my life in 1994 was probably renting videos and watching them in the basement–so I could see one of my favorite bands.  But of course, that didn’t happen.  Well, the STP performance actually did because Letterman taped his show in the afternoon, but it never aired.

At some point–I don’t remember when–I turned on the television and saw live footage of a white Ford Bronco speeding down a Los Angeles freeway followed by police.  The news reporters said that driving the Bronco was Al Cowlings and his passenger was O.J. Simpson.

I have to admit that prior to the Bronco Chase, I had not been following the O.J. story at all.  There had been something in Newsday a few days prior about his being a suspect in the murders of Nicole Brown Simpson and Ron Goldman, but I hadn’t paid it much attention–after all, it was 3,000 miles away, even if that 3,000 miles happened to be Hollywood.  But every television station in the country (at least the broadcast ones that I got) interrupted their programming with live footage of the chase (although NBC showed the chase in a window while they aired Game 5 of the NBA finals between the Knicks and Rockets), so even those people like me who hadn’t been following the story at all found themselves invested in the story whether they liked it or not.

The Bronco Chase itself, to be honest, was not that thrilling in terms of on-screen action.  All it was was a constant shot of the Bronco going down the freeway–you’d get more action on your average episode of COPS.  But knowing who was inside; wondering if he was guilty; and wondering if he would turn himself in, if the cops would take him by force, or if he would actually kill himself (or worse, commit “suicide by cop,” which was an incredibly dangerous proposition considering what sparked the 1992 riots) provided enough tension for me to not stop watching in the same way I couldn’t tear myself away from listening to recent double-overtime hockey playoff games. 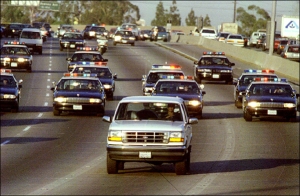 Of course, O.J. turned himself in at the end of the night and it’s his surrender that makes this day the most important day of the decade because had he not surrendered and the outcome been tragic, we wouldn’t hav egotten his trial and the accompanying full-force media circus.  Such intense coverage of a trial had obviously occurred before–in fact, since 1989, New York City alone had been treated to the trials of Leona Helmsley, John Gotti, and Amy Fisher, and the nation had just seen the Lorena Bobbit trial unfold.  But those were either local stories or had a novelty to them; furthermore, they didn’t involve someone as high profile as The Juice.

Almost overnight, a cottage industry of O.J. sprang up.  E! ran a show called O.J. Today, which was syndicated on my local Fox station, Jay Leno practically made a career out of O.J.-related jokes (remember the Dancing Itos?), and just about every person involved with the trial became famous either through what they said or what they looked like.  I mean, stories were run about Marcia Clark’s hair.  Not only that, there was merchandising.  Someone gave me a book named 50 Things You Shouldn’t Say Around O.J. as a funny gift (in the corner of each page was a frame in a flip book that animated the Bronco Chase) and a quick eBay search turns up a knife set, pogs (yes, pogs), photo magazines, vintage pictures, books, and toilet paper.  We, as a culture, could not get enough of this and the media was more than happy to oblige.

Which continues to this day, to be honest.  The nature of celebrity is ever-changing, but it’s like the O.J. trial was the media finally solving the equation of what to do when someone famous does something out of character, unbecoming, illegal, or even terrible.  I could write an entire paper or teach a class about how we enjoy tearing our celebrities down or why we seem to find such joy in a media spectacle, but what it heralded at its core was the 24-hour celebrity news obsession cycle that has only grown and seems to have no end in sight.