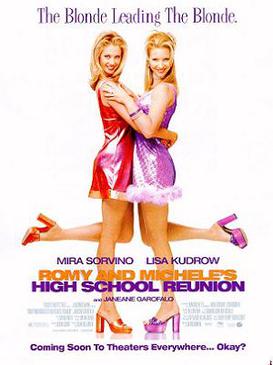 There is a scene toward the end of Romy and Michele’s High School Reunion where Toby (Camryn Manheim) tells Heather (Janeane Garofalo) that Heather’s constantly telling her to “fuck off” throughout high school really hurt her feelings.  Heather, who at that point had come to the realization that Romy and Michele–whom she claims made her life hell in high school–went through hell because of the actions of the “A Crowd,” realizes that she made Toby’s life hell and says, “Tremendous!”  While Garofalo plays Heather as the bitter and cynical one at the reunion, it’s a scene that is a lot more funny and perfect than the way I just described it.  She’s just realized the truth about how bullying works within the high school social hierarchy:  the kids on top picked on someone below them and that person found someone below them to torture and that person found someone below them, and so on.

It’s one of a few darker points made throughout a movie that is best known for its two ditzy main characters.  Romy (Mira Sorvino) and Michele (Lisa Kudrow) are living in Los Angeles ten years after graduating from high school and leaving behind their lives in Tucson.  While they clearly have fun, neither is particularly successful–Michelle is unemployed and Romy works the counter at a Jaguar dealership (where she is constantly hit on by Ramon in the service department)–and after Romy runs into Heather at the dealership (Heather got rich after inventing a quick burning paper that eventually was used in a special kind of cigarette), the two prepare for their high school reunion by flipping through their yearbook and it goes from happy and funny to a realization that they spent the better part of four years getting shit on by the “A Crowd,” which was led by Christy Masters (Jessica Campbell).  Seeing that they’ve basically amounted to nothing and that they have to show up Christy and the A Crowd, they borrow a Jaguar from Ramon at the dealership, buy sophisticated-looking business suits and flip phones, and come up with a backstory about their having invented Post-Its.

This obviously falls apart, mostly due to Heather, who is unaware of the cover story and blows it right in front of Christy, who then take the opportunity to ridicule Romy and Michele for their lie in front of the entire class.  It leads to Romy and Michele going back to their car, putting on custom-made dresses, and then marching back into the reunion where Romy walks right up to Christie and says:

What the hell is your problem, Christie? Why the hell are you always such a nasty bitch? I mean, okay, so Michele and I did make up some stupid lie! We only did it because we wanted you to treat us like human beings. But you know what I realized? I don’t care if you like us, ’cause we don’t like you. You’re a bad person with an ugly heart, and we don’t give a flying fuck what you think!

Christie and her minions laugh it off, making fun of their outfits, but Lisa Luder (Elaine Hendrix), who was once one of the A Group but lost touch with them over the years as she worked her way up the ladder at Vogue, compliments the outfits, to which Christie replies, “You’re just jealous. Because unlike a certain ball-busting dried up career woman, I might mention, we’re all HAPPILY MARRIED!”

It’s one of my favorite exchanges throughout the entire movie because in a way it fulfills a fantasy that I’m sure quite a number of people who weren’t on top of the pecking order have had at least once.  In fact, what writer Robin Schiff (who also wrote the play the film is based on, Ladies Room) and director David Mirkin (who was a longtime Simpsons writer and had worked on, among other series, the Chris Elliott show Get a Life) do is explore several scenarios that you’d expect from a movie that’s about a high school reunion:

There are all elements that could be taken seriously and even used for a drama, but Schiff and Mirkin turn what could be a middle-of-the-road movie into a weird, even crazy at times farce that is more of a “best friends” movie (I hesitate to use the word “chick flick”), and that’s what puts it above any run-of-the mill comedy of the time.  It also capitalizes on what was then a growing nostalgia for the Eighties (The Wedding Singer would be released about 10 months later) with flashbacks to 1987 and a soundtrack that included Wang Chung, The Go-Go’s, Kenny Loggins, Belinda Carlisle, and Cyndi Lauper–in fact, what’s probably the most famous scene in the movie is a choreographed dance the ladies have with Alan Cumming to “Time After Time.”

Funny enough, nearly twenty years after Romy and Michele’s High School Reunion came out, it’s now a great movie to watch for Nineties nostalgia.  The entire look of the movie just screams Nineties and I have to wonder if it was one of the things that the producers of Hindsight watched when they were planning their Nineties flashback series.  And while I’ve skipped over quite a bit of the movie in favor of a couple of the themes it explores, it’s easily one of the best films about a high school reunion ever made.