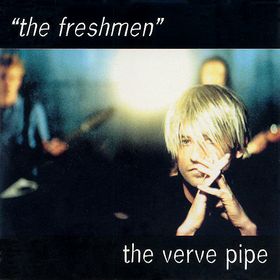 For the life of me, I cannot remember why I ever liked “The Freshmen.”

Okay, that’s not true.  I just needed a way to start this post and thought I would try to be clever.  Obviously, that doesn’t always work.

Anyway, I have been on a Nineties music kick lately and in my listening came across The Verve Pipe’s only hit, a song my nostalgia for probably bears explaining.

Originally recorded in 1992 but rerecorded and released as a single in January 1997, “The Freshmen” peaked at number five on the Billboard Hot 100 in June of the same year and was a complete anomaly in the Top 40, which featured “Mmmm Bop” by Hanson and at least one song by The Spice Girls.  This was not the morose grunge-dominated early 1990s, this was the happy, dawn-of-The-Millennials late-1990s and there were few straightforward rock acts making any dent.  Even I had abandoned most of rock and roll for punk and ska at this point in my life and spent the better part of a summer annoying my girlfriend with The Mighty Mighty BossTones before moving on to a full-blown 1980s pop nostalgia trip.  But I happened to be headed to Charlottesville from Baltimore during spring break in March of ’97 and heard “The Freshmen” on WHFS and thought “This is a song that I need to listen to.”  In fact, I’m pretty sure that I went to The Wall in the Barracks Road shopping center that weekend and the paid full $2.99 or $3.99 for the cassette single.  That is how much I felt I needed “The Freshmen.”

If you’re unfamiliar with it, the song is basically a four-and-a-half-minute-long lament sung by the band’s lead singer, Brian Vander Ark, who wrote the lyrics.  In the song, he hints that something terrible has happened and he feels guilty, although he seems conflicted about whether or not he should be held responsible, especially since everyone involved was so young.  At least that’s what I understood in 1997 when I was playing the song in my Hyundai Excel’s tape deck and the video was being played and replayed on VH-1 as well as on the radio at work that summer where I remember one day we tried for the better part of an hour to figure out what the lyrics meant.  I seem to recall my boss, Joe, thinking that the song literally was about someone falling through ice on a lake and dying.  My guess was not as exact but I was pretty sure someone was dead.

Thanks to the Internet, I now know that Vander Ark wrote the song about feeling guilty over his ex-girlfriend’s suicide.  The lyrics also contain something fictional about an abortion, and listening to it nearly two decades later (I lost the cassette single years ago, however), I hear that.  I also hear why I liked it so much at the time–in 1997, it was a throwback to the bands I had been listening to when I was in high school, like Pearl Jam or Stone Temple Pilots.  Granted, The Verve Pipe was probably more on the level of Candlebox, but that’s how my mind worked.

Anyway, “The Freshmen” also reminds me of a time when I took myself way too seriously as a writer because I thought that is what writers did.  In fact, I don’t think I fully realized that angst just isn’t my style until after I graduated college because at the time the song was popular, I was still trying to write serious fiction … and was doing that pretty badly.  I mean, we’re talking attempts at drama from someone who had one of the most drama-free and “non-dark” lives in history.

But writing class will do that to you.  You are someone who loves to write and don’t have much to worry about in life, and the sappy crap you wrote about your pookie got old during freshman year (as well as extremely embarrassing), and everyone else in your workshop group has an eating disorder, an alcoholic parent, a dead friend, or an inspirational story about finding God.  Smart-assed commentary about Star Wars or short stories that were inspired by John Hughes movies just didn’t seem to hold up in my mind.

Which is kind of a shame, when you think about it, because that means I found my strengths in writing by demonstrating my weaknesses in writing class–thankfully, I was writing a column in the student newspaper at the time, so I could build on those strengths.  But when you think of it, I shouldn’t look fondly on a time when I wasn’t very good at something.  Then again, there’s something about that time in my life when I tried to be deep on purpose and nothing says that more than the forced earnestness of “The Freshmen.”