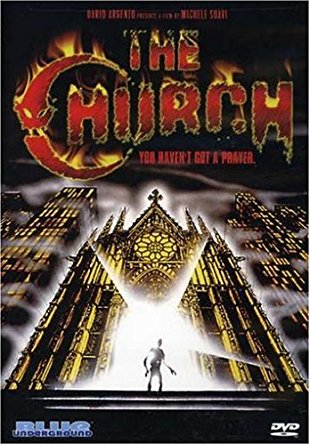 I have little to no experience with Italian horror films.  I mean, if I am being completely honest, I don’t have a ton of horror movie experience overall.  I was easily scared as a kid and kept my distance from horror flicks while at the same time always found myself lingering over the boxes of horror movies at the video store.  I’ve written about this before, but those boxes were almost pornographically alluring–this was the stuff only my dad was allowed to rent, and maybe I would catch a glimpse of it if I walked into the room while he was watching it.

Such was the case with The Church, a late 1980s film produced by Dario Argento and directed by Michele Soavi, which my dad rented at random sometime in 1990 or so and which my friends and I happened to catch the last half of one afternoon when he was home watching it (probably because he’d fallen asleep watching it the night before and needed to return the rental).  Back then, my experience with horror was limited to The Lost Boys, Fright Night, Carrie, and bits and pieces of horror movies that would air on TV, such as Dracula: Prince of Darkness.

I don’t think I understood what was going on when I watched The Church nearly 30 years ago and the movie didn’t scare me, but two images stuck with me:  a woman painted with weird symbols being put on an altar so that she could have ritualistic sex with a demon, and a naked woman making out with a demon who is grabbing her naked behind.  A couple of years later, I saw the latter image–which was Boris Vallejo’s “Vampire’s Kiss”–on some guy’s T-shirt when I was at Mission Beach in San Diego.

But I never saw The Church again, even in my browsing through the more random depths of the video stores of my youth and even when I had gotten over my trepidation about horror and rented some of the classics.  In fact, I had forgotten it had existed until I began compiling my list of topics for this blog and had thrown it into my Netflix queue where it lay buried until it showed up on the mail a few weeks ago.

Which segues into my very brief summary of the movie’s plot:  The Tetonic Knights slaughter a village of Satan worshippers, although one of them (played by a tween-aged Asia Argento) escapes.  They bury the bodies and over the years, a gothic cathedral is built on top of it.  Flash forward to modern day where a small group of main characters both accidentally and deliberately brings about the chain of events that will unleash the evil contained underneath.  All that stands between that evil and our world is Father Gus (Hugh Quarshie–Castigir from Highlander), who seems to be the only person in the entire film not possessed, driven insane, or otherwise affected by the coming evil.

This is not a movie that you watch for its story or for its character beats.  This is a movie you watch because when things get going, a lot of really weird shit happens.  People get possessed and rip out their own organs, they get impaled, they have sex with demons, they use other people’s severed heads to ring church bells–it’s almost like the writers sat around a room and brainstormed the hell out of what you could do to a group of people trapped in a demonically possessed gothic cathedral.

It’s not an all-time great movie, but I did find that The Church still stuck with me all these years later, much like it had in the 30 minutes or so that I saw back in 1990.  As of my writing this post, it’s not available on a streaming service, but a Blu-Ray was released earlier this year that apparently cleaned up some of the picture issues seen on the DVD and may have even remastered the sound (if there’s one thing you have to get used to, it’s the amount of dialogue that was obviously looped in post-production).  I’d check it out if you’re a fan of schlocky, crazy horror or really like gothic cathedrals.