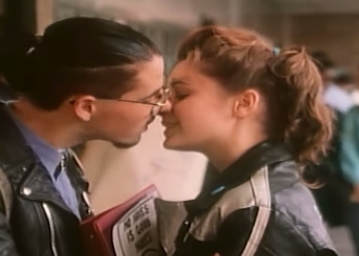 There are some moments from Degrassi High that I have been able to picture even without having seen the show in a very long time. Toward the top of that list is Caitlyn Ryan getting caught on a chain link fence.

There’s a lot more happening in this episode, which is the major reason I picked it for a write-up, but I have to admit that it was a favorite of mine in junior high because this is the one where Caitlin dumped Claude (pronounced Clow-de) and I have to be honest, I always hated that guy. Then again, I don’t know if we were ever supposed to actually like Claude because he’s the person who came between OTP Joey and Caitlin. Plus, when I was 12, I had a pretty big crush on her, and my junior high school (and then my high school) was overrun by overwrought guys like Claude who spent every minute ensconsed in their angry young man attitude and Morrissey cosplay.

ANYWAY, the overarching topic of both the A plot and the B plot of this one is causes and community service. The B plot is about the freshmen challenging one another (although this is Canada, so I think it’s “niners”?) to see who can raise more money for UNICEF and it leads to Arthur Yick toilet-papering Mr. Raditch’s house. It’s a generally hearmless comical subplot that cuts through the seriousness of the Caitlin/Claude breakup and the C plot involving Kathleen that I’ll get into later. The Arthur-Yick friendship was one of the strongets when I started watching the show in the DJH years but had become strained. Seeing these two together and having fun was a reminder of that for both of us and them. Plus, the way Raditch busts them by asking them to stop by his house to “pick up some paper” is a great sitcom-y beat.

The Caitlin/Claude plot happens simultaneously with that one, as the same night that Arthur and Yick are going TP-ing, they set out to vandalize a munitions factory. This all gets set up a couple of days earlier at the office of People for Peace, the political movement they’re volunteering for. They’ve spent a lot of time making copies and stuffing envelopes–as teen volunteers tend to do–and Claude is frustrated by the lack of direct action. He wants them to take down a local factory that is supposedly helping to manufacture nuclear weapons. When their boss tells him that it’s not on their agenda and chuffs at the idea of throwing bricks through the factory windows, he decides he is going to spray paint the walls. Since Caitlin is so enamored by his dedication to all things causes (and since he’s not that idiot Joey), she goes along with him. But when they get caught by the night watchmen and she gets stuck on a fence while trying to escape, something that was telegraphed by her getting stuck on the same fence while trying to get in, but this time Claude runs off instead of helping her.

Needless to say, this act of cowardice–and Claude being afraid of what his parents would think if he’d gotten caught AND asking Caitlin not to tell anyone from People for People that he’s a huge chicken is the last straw and she dumps him. Not only that, since she was arrested she will have to go to court and this will come up a few episodes later in “Testing, 1-2-3.” That’s a particularly great scene because he tells her he can’t go to court to support her because the night watchman might recognize him and then his parents–who are much more conservative than Cailtin’s–would ground him. For that, she smacks him so hard that she makes his nose bleed (and gets detention where she runs into Joey and they wind up having it out with each other). So Claude’s dumped, he’s a total loser wuss, and there will come a point where we will never see him again.

Now, I mentioned the C plot, which is about Kathleen. It’s actually the most serious of the three and the only reason it’s not the A plot is because it’s a follow-up on an earlier episode, “Nobody’s Perfect”, which is all about how her boyfriend, Scott, was physically abusing her. For an Eighties show that could be Afterschool Special at times, itw as written slightly better than some of the other episodes of its kind because it relies on emotional manipulation over the course of nearly half the season as much as it relies on the moments where Scott is shown either verbally or physically abusing Kathleen. After literally getting beaten in “Nobody’s Perfect”, she broke up with him and now he’s decided to start stalking her. This all starts out with “I miss you” over and over until the point where Scott can’t take it anymore and physically attacks her. The end result is that she returns to school with her arm in a sling and a restraining order against Scott.

Kathleen Mead was set up to be one of the more unlikable chararacters in Degrassi. She is a high-strung wet blanket who is also competitive and a perfectionist. It is not without reason, as we have come to see that she is compensating for having a terrible home life (her father is pretty absent and her mom is an aloholic), and the fact that Scott is older than her ties right into her personality and her compensating for things.

Rebecca Haines, by the way, owns this entire storyline and does a fantastic job of carrying her scenes with Byrd Dickens who plays Scott because his line delivery is horrendous*. It’s a challenging storyline that could very well tip too far into melodrama and even when it does, she is very good.

Next up: Check out episode 105 of the podcast, which drops in a week or two, to see how I cover “Stressed Out” and then come back for pot smoking and poker playing in “The All-Nighter.”

*I don’t feel bad for being so mean about this person considering his arrest record.