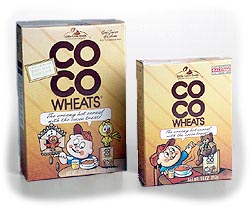 I’ve always been attracted to random stuff at stores. When I was a kid, for instance, I liked to walk down the “aisle of forgotten toys” at Toys R Us. In fact, I even had a few of the random-assed action figures found in that aisle or at places like Odd Lot. The obscurity of those things was kind of alluring – they were products that weren’t as cool or popular as the G.I. Joe figures that were selling out in droves, so they were more or less buried in the store (which, in a way, probably explains why I created this blog). As I got older, I saw the same thing with books, albums, and movies, which led to some purchases that were pretty awesome and others that wound up explaining why said item had been left for retail dead.

I never thought the same could be said for food, however. Food, in general, has an expiration date, so I would be less likely to find a three-year-old jar of peanut butter on a store shelf (although I am sure they probably have some at South of the Border) than, say, leftover Spider-Man 3 toys. Still, there are always some foods in a supermarket that never seem to exist anywhere else, as if they were brought here through an interdimensional portal or something.

Nowhere is this more apparent than with cereal. Stroll down your average cereal aisle and you’ll see a variety of products you never knew existed–bagged cereals, oddly named generic cereals, laxative cereals, King Vitaman–and while most of them won’t even garner a second glance, there is sure to be one that jumps out at you.

For my wife and I, this was the case with CoCo Wheats. A chocolate-flavored farina cereal, we first encountered it at a Kroger in Charlottesville back in 2004 or 2005. I can’t remember if we bought a box the first time we saw them or if our first time came later, but somewhere along the line in our search for a breakfast food that wasn’t the same boring box of Cheerios, we decidd that we had to have them. Thankfully, we were not disappointed upon trying them for the first time; in fact, they’ve been a welcome addition to our breakfast table ever since.

Okay, I read that last sentence and realize it sounds like every crappy commercial ever. Sorry.

Anyway, two things that I found particular about CoCo Wheats were that for a cereal that kind of seems obscure, it has a pretty rich history; and the actual process of cooking CoCo Wheats is nothing short of a chemistry experiment. END_OF_DOCUMENT_TOKEN_TO_BE_REPLACED