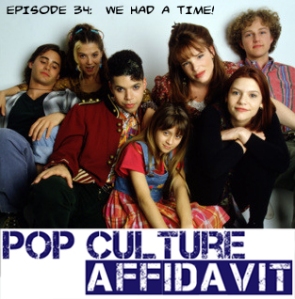 My MSCL two-parter concludes with an extra-sized celebration through conversations with longtime fans of the show.  Join me, Sarah Bunting (of TWoP and Previously.tv fame), Cory, Mark, Andrea, and chelle as we talk about MSCL, its impact on our lives, our history as fans, and the show’s legacy twenty years later.

Twenty years ago, a television show premiered that, while it lasted only one season, had a clear impact on its devoted fans.  The show was My So-Called Life.  In honor of its twentieth anniversary and its place in 1994: The Most Important Year of the Nineties, here’s the first of two episodes.  In this one, I give my so-called origin story and take a look at each episode.