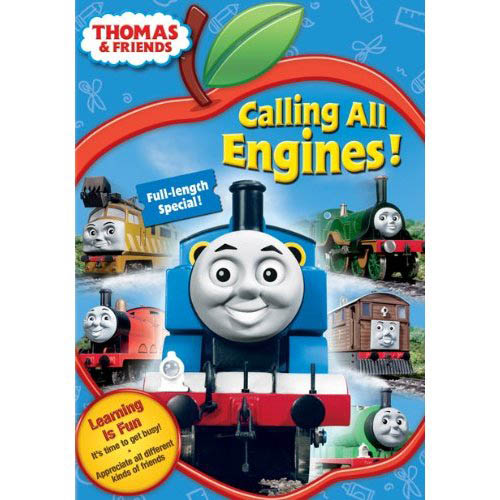 My son turns three today and while I actually did buy him a real birthday present (a NY Mets shirt–gotta start him early!), I wanted to write an entry about something in pop culture that he likes.  Now, three-year-olds are not exactly discerning consumers.  He’ll sit and stare at the most random crap for at least ten minutes before he gets distracted by one of his toys.  However, since last Christmas, he definitely has had a love of Thomas and Friends, the British-produced, PBS-aired television show where model trains get into all sorts of adventures.  He has several of the motorized train toys and a mile or two of tracks which I can configure several hundred ways.  He’s also got several DVDs, most of which are collections of various episodes from the series.

One of his favorite DVDs, Calling All Engines, is a “full-length” episode of the show, meaning that it’s an entire hour as opposed to several stories in the span of 30-60 minutes.  The story is pretty simple–of course, it has to be considering it’s geared toward preschoolers–a new airport is going to be build on the Island or Sodor (where every episode takes place and which has weather patterns so varied that it must take up half of the Western Hemisphere) and Sir Topham Hatt wants all of his engines to aid in construction.  The steam engines get to work but them run afoul of the deisel engines.  They all fight, get reprimanded after nothing gets done, but then pull together at the end.