I guess that if you were going to comb through the annals of pop hits that have made their ways into senior proms and yearbooks, you wouldn’t expect to find lyrics about being resilient in the face of Armageddon.  No, your regular prom fare is about being the best of friends to the end or holding onto that girl or guy and never letting go.  Sometimes the song is written specifically to be used at a prom or graduation (I’m looking at you, Vitamin C) but “Are you gonna drop the bomb or not?” A lyric like that is unexpected.  Unless, that is, you went to high school on Long Island in the 1980s or 1990s, as my class—the Sayville High School Class of 1995—was one of many who dialed up Alphaville’s “Forever Young” for a slow dance at prom.

Running about 3:45 and coming from the 1984 album of the same name, the song was written by Marian Gold, Bernhard Lloyd and Frank Mertens, who comprised the German synth-pop band (whose original name was actually Forever Young).  Coming out at the height of Duran Duran’s MTV reign and around the same time as U2’s The Unforgettable Fire, “Forever Young” seems like it was an album that got lost in a sea of new wave songs that were ruling the playlists of stations like WLIR (later WDRE) in the early to mid-1980s.  However, though the title track only hit 65 on the Billboard Hot 100, stuck around, becoming a cult hit well into the later part of the decade, nearly three years after its release.  According an article in the June 11, 1988 issue of Billboard (whose text is included in the liner notes to the Singles Collection CD), the song was voted as #1 on a countdown by listeners of WDRE in 1988, and had a definite influence across the Island:

“Forever Young” is so slow and dreamy that Laura Branigan could cover it (and did).  While “Forever” was the top record of 1985 at WPST Trenton, NJ, where it is still played as an oldie, it hasn’t been passed from one hip, top 40 PD to another (Both “Blue Monday” and “I Melt With You” have).  It’s not even played everywhere in its own format.  It has shown up at various Long Island high schools as a class song in recent years.  The song’s popularity among teens may be due to its emphasis on mortality, a running theme in the bopper hits of the ‘70s.

WDRE, the name during the late 1980s and early 1990s of what was once WLIR, a leading modern-rock station based on Long Island.

Sure, that’s fine if you’re graduating in 1988 and have some familiarity with the “bopper” hits of the 1970s.  But I was born in 1977 and up until I heard “Bohemian Rhapsody” for the first time (thanks, Wayne’s World!), my only exposure to the 1970s was Sesame Disco.  How does a synth-driven song translate to a class of roughly 225 teenagers who had been digesting nothing but alternative rock for the past four years?  I guess that since quite a number of people I went to high school with still listened to The Cure, The Smiths, and Morrissey would explain it (and the fact that my playlists were dominated by Queen and Billy Joel) but that was a minority among a sea of Nine Inch Nails, Green Day, and Metallica T-shirts in SHS’s halls on a daily basis.

Fifteen years later, I think that the song made its way to our senior prom for one of two reasons:  either someone on our student council (which was clearly not populated by Cure and Morrissey fans) thought the lyrics were profound, or someone’s sister or brother had used it years before.  Knowing how steeped in “My brother/sister/cousin/father/mother/aunt/uncle/grandfather/great-great-grandfather went to/founded/built this school” said student council tended to be (and let’s face it, the entire school and town were like that and to a huge extent still are), I would bet on the latter.

Even so, the lyrics are worth looking at.  After a soft synthesizer opening, the first verse begins: “Let’s dance in style, let’s dance for a while/Heaven can wait, we’re only watching the skies/Hoping for the best but expecting the worst, are you gonna drop the bomb or not?”  Like I said, it’s kind of a doom and gloom opening for a song that’s supposed to celebrate a rather memorable night, and it feels like Doomsday a little bit.  But then you have the next lines: “Let us die young or let us live forever/We don’t have the power but we’ll never say never,” which are a powerful contrast, painting a picture of resilience in the face of impending destruction.  It is, in a way, a response to that famous line in The Breakfast Club, “When you grow up, your heart dies.”  We, as a generation of teenagers (X, Y, XY, whatever label we’re supposed to “have”), are not going to just lay down and die because the times we’re graduating into are tough.  We shall not go gentle into that good night!  Rage, rage against the dying of the light!!!

Well, the soaring synthed-out horns at song’s end seem to think so, anyway.

But as I was saying, when you go to a school with a lot of “legacy” and have a prom committee run by sure-headed teenage girls, if someone gets a jones for Alphaville, it’s going to be the center of attention.  Because when voting for a prom song came around, nobody in my class seemed to know what the song was, and probably didn’t vote for it, especially since the other two choices were “In Your Eyes” (by a misspelled “Peter Gabrielle”) and the Beastie Boys’ “Fight for Your Right.”

Now, I may not have been popular enough to make the “nobody voted for ‘Forever Young’” argument, especially since my only exposure to a song named “Forever Young” was the Rod Stewart song (you know, the one with the video of him riding on the back of a truck or train or something with some annoyed-looking redheaded kid), but when you put “Fight for Your Right” on a ballot, I guarantee you that it’s going to get more votes than any other song.  I’m sure that people who weren’t even going to the prom saw that and said, “Beastie Boys?  Fuck YEAH, man!”  But as goes the wishes of our prom planners, so go the wishes of our class.

I can’t say that I was too disappointed, anyway, because even though I didn’t know the song, when my friend Melissa managed to track down a copy and throw the cassette into the yearbook office’s boom box on the last day of classes that year, the lyrics and the tone made sense.  It was an anthem and oddly appropriate for a class whose taste in songs to dance to at a prom included “December, 1963 (Oh What a Night!)”, “Blister in the Sun”, “Bizarre Love Triangle”, and Simon & Garfunkel’s “Cecilia” (Seriously.  Any time it pops up on my iPod, I flash back to people rushing to the dance floor to dance to that song, which is actually kinda cool.  The students I teach would stand around not knowing what the song is if it were played – then they’d try to simulate sex to it).  In a time of songs like “Hero” by Mariah Carey (which was sung at my graduation), we were being … dare I say, sophisticated?

Not unique, though.  As mentioned, “Forever Young” was a Long Island prom favorite, and about ten years later would show up in a prom-themed ad for the Saturn Ion as well as during the dance scene of Napoleon Dynamite.  But we were before that, when trends like this happened via the radio or even via word of mouth, and there was sincerity or at least something genuine behind the pick. 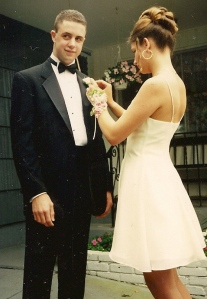 Which, exactly fifteen years after I attended my senior prom, I am grateful for.  As I’ve said to my students time and time again, proms are supposed to suck.  The food is bland, cold, or overcooked; the music, for the most part, is crap; there’s at least one couple that spends the night fighting; there’s at least one person who gets kicked out for showing up drunk off his or her ass; and by the time the end of the dance approaches, three-quarters of the attendees have left for whatever keg/case/liquor they have stashed.  Of course, I was one of maybe a dozen people who stayed all the way to the end and spent the night watching movies at my friend Tom’s place instead of getting drunk and in trouble, so I’m not an authority on the subject.

My prom wasn’t something out of Pretty in Pink or some of the fiction I would later write (which would reference “Forever Young”), either.  But so much of June 22 of 1995 is still pretty memorable because it was simply a great night for me and whenever I hear “Forever Young” I think of how six of us piled into a limo with my parents’ video camera and really did our best to have a good time (and how I turned 18 the next day before graduating on the 25th).  Which is all you can ask for in the long run, right?