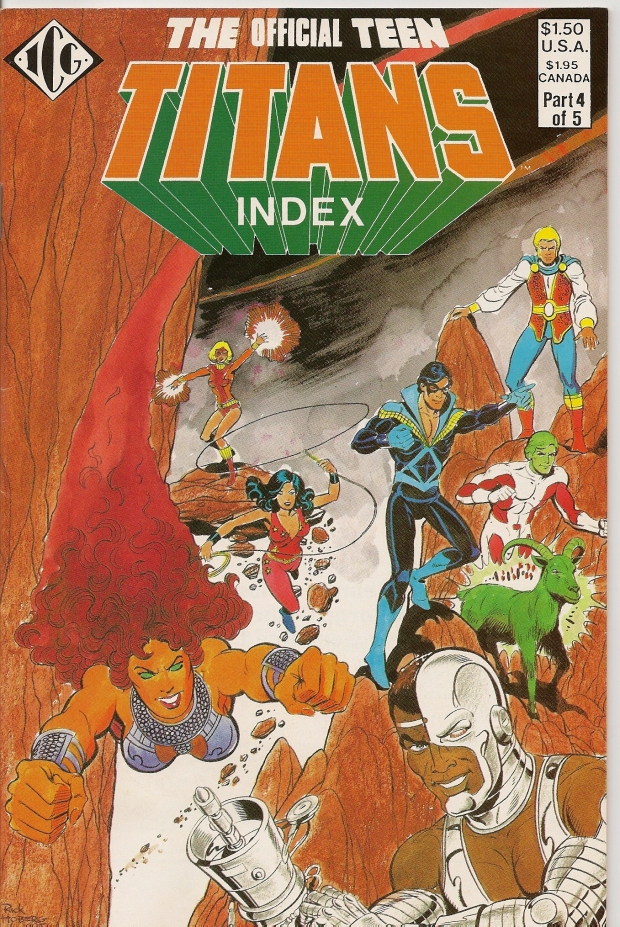 Now, in covering the era of the New Titans that I started reading with New Titans #71 (and wrote about last month), I intend to go in order, “chunking” the various books into the various storylines that ran all the way up until the series ended in 1996 with New Titans #130.  But from time to time I’ll be taking a detour into older issues of the series.  That’s because they both tie into the stories at hand as well as this period in my life when I moved beyond buying current Titans issues to hunting through the back issue bins looking for the older stories.

Ask any die hard comic fan and they will probably tell you exactly what issue of his title was the one that cemented his love for the characters or creative team and made him want to own every single issue, no matter what the price that his local comic shop has them going for.  It’s usually a random issue, one that comes out while he’s starting to read a title or has been reading one for a little while, or it’s a trade paperback that collects several issues and gets him wanting to buy the issues that are not only collected but were published around them.  In my case, it was neither.  My desire to collect Teen Titans back issues began in quite possibly the most random way, through The Official Teen Titans Index #4.

Published in partnership with DC Comics, Independent Comics Group (which may have been connected to the late, lamented Eclipse Comics, as Eclipse has a lot of house ads in the books) printed five issues that ran through each of the comics featuring the Teen Titans from their first appearance in Brave and the Bold #54 all the way up until the second New Teen Titans series #16 (I’ll explain about the whole 1980 series/1984 series thing in a bit).  Each issue’s entry went through the details about who the creative team was, the major characters, and an overall synopsis of the issue’s story.  Notes about the last and next appearance of each character as well as special notes were included.

I was completely unaware that indexes of comics existed (the modern-day equivalent would be a wiki or online databse, I guess), but one Wednesday afternoon, I was at my friend Harris’s house hanging out in his family room while my sister took her piano lessons in the living room and we were flipping through whatever comics we had been reading that week when he took out The Official Teen Titans Index #4.  I’m sure he got it from Bob’s back issue bins, although I’m not entirely sure, and I remember spending the remaining half hour poring over the comic.

Featured in the issue was the full third and fourth years of the first New Teen Titans series, starting with New Teen Titans #26 (the first of a memorable two-parter called “Runaways”) and ending with New Teen Titans #50 (the wedding of Donna Troy and Terry Long), a period during which the Titans took on some of the better-known members of their rogues gallery, such as Deathstroke, The Brotherhood of Evil, and Dr. Light.  Futhermore, that particular issue of the index featured the issues that were included in a trade paperback I would eventually get for my birthday in 1991: The Judas Contract.

The index entry for New Teen Titans (1980) #34, which was hard to find in back issue bins because of a Deathstroke appearance and a key "Judas Contract" storyline moment.

That particular story is probably the best known for any Titans fan, as it is the culmination of two years’ worth of story wherein the Titans meet a villain named Terra who they would then take under their wing and make a member, only to have her turn out to be a spy for the Terminator in his effort to take down the Titans and deliver them to a terrorist organization known as The H.I.V.E.  The synopses in this issue provided the details of this entire story arc, and while they gave away the ending to all of the back issues I would collect, they would leave enough out that I wanted to see how the story plays out in full detail.  And at the time, the back issues were easy to come by at Amazing Comics and weren’t very expensive.  This was, after all, the days during the big X-Men and Spider-Man boom when DC Comics was regularly getting its ass kicked by Marvel in sales (and later by Image) and comic stores seemed to be popping up on a regular basis all to sell random Jim Lee-pencilled comics at $20 a pop.

So I would start collecting.  I’d get The Judas Contract for my birthday and then I’d make a couple of bucks here and a couple of bucks there and would start to piece together the issues around it, fleshing out the full story of the New Teen Titans during this era, although getting my hands on the issues that featured Deathstroke was pretty tough because while the Titans Hunt dragged on, Deathstroke became popular enough to get his own title (issue #70, btw, had been a Deathstroke solo issue that was more or less a “pilot” for the new title) and his appearances, especially during the 1980s, were priced pretty high (okay, issue #34 went for around $10 but that was expensive for me back in the day when I bought pretty much all of #26-50 for about two bucks apiece).

In those days before the Internet, you needed to be connected in more ways than one in order to really become a comics fan.  Oh sure, I could have flown solo by going to my local comic shop and picking up the latest issue of Titans and spent hours sifting through back issue bins (of course, I did that anyway), but when you had someone to read the books with and talk with the books about, you seemed to care more, and most of my other friends were more interested in the fate of the New York Rangers than they were the fate of a group of teenaged heroes that had been betrayed by one of their own.  Harris and I had bonded before over video games and other things like Teenage Mutant Ninja Turtles (which was huge at the time), but the fact that we were about to spend nearly two years writing regular letters to the book (and its spin-offs as well as the Batman titles) cemented our status as a comic/sci-fi team.  And I’ll get to our letterhack careers at some point in the future.

But for now, we’re at the start … and at the end as well.  In June of 1999, about a month after graduating from college, I drove up to Boston to spend the weekend with Harris and naturally, we hit a local comic shop.  There in the back issue bins were three of the five issues of the index series at a cheap price.  I scooped up those, as well as several other issues and Springsteen’s The River on vinyl, and would add them to my collection once I got back to New York, a collection that would finally be finished with a Titans Hunt issue that brought that era of my hobby completely full circle.

Next Up: I swear I get back on track with a spotlight on Raven in New Teen Titans #1-5 in 1984 before I head to the completion of the Titans Hunt in New Titans #82-84.