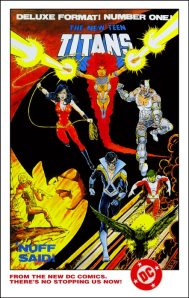 So in making my way through the Titans Hunt storyline, I find myself putting off the end of the Hunt (aka “The Jericho Gambit”) and subsequent story arcs to flesh out the background of these characters as well as my personal collecting history.  Because when you are so into a series that you want to get every single issue going back ten years, there are definitely periods of time when what is going on in the present is an afterthought and you choose to relive the glory days of the past.

In this case, the glory days tie directly into the present as it is, because when “The Jericho Gambit” begins in issue 82, we will find out what has been hinted at for a while now–Jericho did not simply decide to betray his team.  instead, he is possessed by an evil force that has a connection to Raven and her dead father, Trigon, the raison d’être of the New Teen Titans.

In 1980, DC slotted a 16-page new Teen Titans preview into DC Comics Presents #26 and that short story starred Robin, who seemed to be having nightmares wherein he was fighting with a new group of Teen Titans.  Except half of these people were not familiar to anyone, and they weren’t really dreams but premonitions that a girl named Raven planted not only in his mind but in the minds of all the other teammates, manipulating them to team up because her father was coming to destroy the world.

Raven, you see, is an empath, and the only surviving offspring of the demon Trigon, the evil ruler of another dimension who has just discovered Earth’s existence and wants it all to himself.  Raven has been raised by the denizens of Azareth, a realm where people who dress like monk/cult members follow Azar, a pacifist goddess of sorts, and she has the power to heal other people’s wounds (and pretty soon will be able to actually manipulate emotions).  Knowing that her father was coming, she tried to get the Justice League of America’s help, and was rejected because Zatanna–the resident magician–saw something evil inside her.

The Titans do stop Trigon, sending him to a “prison dimension” and he spends the next four years manipulating his daughter in an effort to take her over, reenter our dimension, and rule the world.  What’s great about that is that it’s done subtly, through the occasional moment when Raven stretches herself too far or is too angered, or has a few panels here or there where she is behind the scenes suffering because her father’s influence has weakened her. 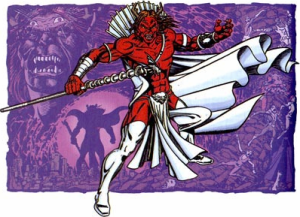 Trigon the Terrible: interdimensional demon. Don't ask him if you can date Raven.

This new series was where I first encountered Trigon and really got to know the Marv Wolfman-George Perez era team, once again picking up one of the many back issues that Harris had gotten a hold of and that I sifted through during my sister’s piano lessons.  He had picked up issues 2 and 3 of the series, which featured Raven’s turn to evil (she grows another pair of eyes and her skin turns red) and then subjecting her former teammates to their worst nightmares wherein they face and ultimately fight and kill their darker selves.  I’d pick up #1 shortly afterward, paying only $5.00 for it because with the exception of a few very early issues or Deathstroke appearances, Titans back issues went cheap.

If you could find them, that is.  Because it would be a long time before I would get the rest of this storyline and find out how it ended.  I mean, I knew how it ended because Raven as of 1991 was still alive and Trigon hadn’t been heard from except a passing mention here and there.  But I would get issues #4 and #5 before “The Jericho Gambit” ended, tracking both down at Sun Vet Coin and Stamp, which was my “alternative” comic store, the place I went to when Bob didn’t have the back issues I needed.

This particular time in my life was when I was branching out on my own a little more.  Had I lived in a place where I could drive at the age of 15 or 16, this would have meant taking my brand new car all over Long Island to discover what comics I could find.  But I didn’t get a license until after I turned 18 and I wasn’t driving my own car until I was in college.  But I did have my bike and I did have friends who would ride insanely long distances. 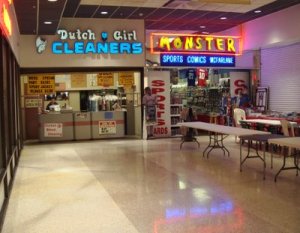 the "Monster" comics shop is what was formerly known as Sun Vet Coin and Stamp. Picture courtesy of "The Caldor Rainbow" blog

My friend Jeremy was not a comic fan.  He was the friend I spent time with playing video games, watching shitty horror movies, and exploring a new thing called the Internet.  but when we weren’t screwing around at his place, we were riding to other libraries to look up books on the paranormal and to places like Sun Vet Mall.  I think he was indulging me by hanging out at Sun Vet Coin and Stamp because there honestly wasn’t anything else of interest, unless he really wanted to build model rockets.

Then again, there wasn’t anything really of interest at all at Sun Vet.  Located where Sunrise Highway and Veterans Highway meet in Holbrook (hence the name), the mall is anchored not by any department store, but by a PathMark and a Toys R Us (although back in the day that Toys R Us was a Rickel Home Center).  The mall is one level with not much else to speak of except for maybe The Gap, which was right by the main entrance, and Santa’s workshop, which was in the center of the mall not far from the snack stand that always made the place smell like soft pretzels.

So aside from throwing a few quarters into the Arkanoid machine at “The Subway,” which was a leftover relic of the Eighties, why would we want to go to the dimly lit Sun Vet Mall?  Simply put, in order to get there, we had to not only drive all the way across town, but we had to cross Sunrise Highway.

At 13 and 14 years old, this was a bit of a feat for a kid who used to have to ask his parents for permission to walk just a few blocks to the comic store or get a slice of pizza.  Sunrise highway was at the very north end of town and crossing meant waiting for a traffic light to change nad then running or riding as fast as possible across all four lanes, praying that you would make it across before the traffic started blaring its collective horn.

Possessed by Trigon, Raven takes on her former teammates.

That was the case if you were crossing at Lakeland or Johnson Avenues in order to get to K-Mart, anyway.  Crossing at Broadway Avenue and Sunrise Highway was less treacherous because there was a bridge and service roads,s o we didn’t have to dodge traffic.  The hours I spent making want lists and then combing the Sun Vet Coin and Stamp back-issue bins were just as many as those I spent poring over the prices in the Mile High Comics catalog, through which I placed comics orders for my birthday and Christmas every year.

My eventual purchase of all five issues (which are now collected in the Terror of Trigon trade) and the sixth epilogue issue brought together the culmination of a great era in Titans history.  Like I said, Wolfman and Perez had been working toward Trigon coming back and the Titans making their last stand since about 1980-1981 when the New Teen Titans series had begun.  Issues 1-4 take the team into the darkest of possible places wherein each hero is corrupted and turned into his/her darker self, but then turns on Raven (who thought she was controlling them) and kills her.  Issue #5, ont he other hand, ends in a symphony of light where the disembodied souls of Azareth use Raven to envelop Trigon and ultimately destroy him.  Of coruse, as we will come to find in “The Jericho Gambit,” thsoe souls would become corrupted and take over Jericho,w ho had once entered Raven’s body as a way to figure out what was wrong with her.  This is where I was around this time in The New Titans, waiting for the climax of The Titans Hunt, and then wondering what would happen if and when they finally escaped.