The cover to The New Titans #82, picking up where we left off four issues ago.

Is it me or does it seem that I’m taking forever to get through coverage of what amounts to about 12 issues of Titans comics?  Well, I guess when you’re doing these once a month it is going to take a while, but in thinking of what it was like to buy New Titans off the shelf back in the early 1990s this is very appropriate.  The title, creatively, was doing very well and what the new editor, Jon Peterson had brought was the shot in the arm it had so desperately needed.  However, there were several times where it was terribly late, and that makes it kind of surprising that within a year or so it would be selling well at all.

Who knows why fans put up with it?  Perhaps having a book run a couple of weeks late isn’t that bad in the beginning of the Image Comics era of books that would ship late up to a year (to the point where it would become a running joke), although DC was able to get four Superman titles out on time each month, so it’s not like their operation was a complete disaster.

Anyway, I remember riding up to Amazing Comics each month with my money in my pocket and being excited when the book was there and a little dismayed when it wasn’t, although not having Titans meant that I could dive into the back issue bins for a few minutes and maybe add to my Wolfman-Perez collection.

It’s also pretty appropriate that I took forever to get to this point because not only had the book been shipping late, but the story itself had been dragging on for a little bit.  Not in an X-Men sort of way, but the last issue that I covered was New Titans #78 and I’m starting this with #82.  There are four issues (three plus an annual) that had a little bit to do with the story but didn’t advance it, and all of which I’ll get to next month when I take a look at the long road to the “Total Chaos” storyline.

For now, though, we have “The Jericho Gambit,” which concluded the “Titans Hunt” in New Titans #82-84.  What “The Jericho Gambit” actually means is beyond me.  Webster’s defines “gambit” as  a chess opening in which a player risks one or more pawns or a minor piece to gain an advantage in position.  No, seriously, that’s what Webster’s says.  I looked it up. But whose opening move is this?  I’d say that Jericho made his gambit back in issue #71 when he kidnapped all of the Titans or maybe even #72 when the ‘beests killed Golden Eagle in an effort to get Aqualad.  I think that they were going for a title that sounded a little like “The Judas Contract,” which is the most famous New Teen Titans storyline (and one I’ll get to at some point), but this time around there was nothing on the cover to indicate the name of the istoryline and I don’t know how much the book was advertised.  From what I remember, It wasn’t covered in Wizard (then again, DC had to kill Superman in order to get coverage in Wizard). 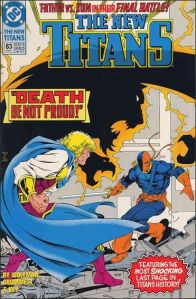 The cover to The New Titans #83, with the big showdown fans were expecting and waiting for.

But after a few months of setup for other storylines and different art teams, Marv Wolfman, Tom Grummett, and Al Vey came back to take this thing home, which meant that whatever they put together you knew, or at least hoped was going to be as tight as those first few Titans Hunt issues were.  And much like each of those first few Titans Hunt issues, something huge happened in each of the three parts of this finale, complete with a huge dramatic cover that was straight out of the Marvel comics playbook.

In issue #82, we saw Jericho start something called a “tranferrence procedure” and Nightwing made an attempt to thwart him, which got Jericho angry and our fearless leader was thrown in a cell with someone who the other Wildebeests were scared of.  It turns out that the person they were scared of was the “original” Wildebeest, a guy who had started the organization as basically a criminal network, and then was knocked aside by Jericho, who took it over and apparently had crazy powers, which we find out later are because he’s possessed by the souls of Azareth, who had been tainted by the evil of Trigon after they killed him all the way back in New Teen Titans (1984 series) #5 (which I took the time to go over last month). 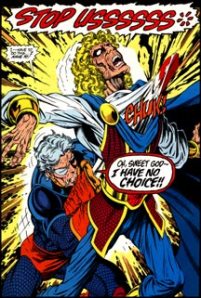 Deathstroke kills Jericho on the last page of The New Titans #83.

We begin to figure this out when the people looking for the Titans find the dimensional doorway to Azareth (it’s literally a doorway, btw) in the last pages of issue #82, and it’s flat-out said during issue #83, when the inevitable happens and Deathstroke kills his son, Jericho, in order to save everyone.  Then, in the final part of “The Jericho Gambit,” Raven gets all devil’s daughter again and takes on her mother and Danny Chase.  She dies and the two of them become Phantasm (up until that point, Phantasm had been Chase telekinetically moving a hockey mask and a sheet).

If my description seems a bit anti-climactic, it’s because when I first read these three issues, I already knew what was going to happen, and so it was anti-climactic to me.  The problem with DC shipping books late at the time was that each of their mainstream superhero titles was part of a larger universe, and that universe was being covered in the now-famous binder edition of Who’s Who in the DC Universe.  Furthermore, Deathstroke had received his own title.  Had the book shipped on time, issue #84 would have come out either right before or around the same time as both the first issue of Deathstroke: The Terminator and issue #14 of Who’s Who. 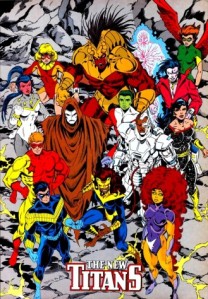 The infamous Who's Who entry, which features one of the few appearances of a never-used new costume for Troia.

However, it didn’t, and through the first few issues of Deathstroke: The Terminator, we found out that Deathstroke had killed his son, which wasn’t really that big of a spoiler because anyone who was paying even a little bit of attention to the story knew that’s was where it was headed (to the point where they made it the end of the second of the three-parter).  But the Titans were given the cover of Who’s Who #14, probably in a triumphant return to their former glory, and that hit shelves in October 1991, whereas New Titans #84 would come out in January 1992.  The last three paragraphs of the Titans entry reads:

Wonder Girl leanred of her connection with the Titans of Myth and against her own wishes, became the goddess Troia, while Jericho was taken over by the Trigon-possessed energy beings of Azareth and killed many of his friends before he was slain by his own father, the mercenary known as Deathstroke, the Terminator.

New members joined the Titans after Jericho’s demise.  They include the Russian powerhouse known as Red Star, the mystic being who calls himself Phantasm–psychic amalgam of Danny Chase, Arella, and the now-cleansed energy force of Azareth.  The deadly Pantha stays with the new Titans, but for reasons that she has kept to herself.  Finally, an artifically developed Wildebeest infant whose power is as great as his mental capacity is small rounds out the current membership.

The New Titans membership remains in a state of flux, constantly changing and evolving.

There it is!  Right in print!  I didn’t even need to buy any of the issues if I didn’t want to because I found out exactly what happened and then some (I’ll get to the whole Baby Wildebeest nightmare next month) in the pages of another comic.  I mean, I’ll still give Marv Wolfman credit for going over-the-top with the drama and superhero language (beacuse nobody but a comic book character screams “OH SWEET GOD I HAVE NO CHOICE!” while killing his son), and rereading the story nearly two decades later, any spoiler sourness has worn off and it works very well.

But this was the second time that year I’d had the ending of some big DC event fucked up for me in some way, the other being Armageddon: 2001, which had a changed ending due to the fact that someone had leaked the reveal of the big bad guy’s identity (a new ending, btw, that sucked).

[Quick plug time: If you really want to hear about Armageddon: 2001, check out two episodes of one of my favorite podcasts, From Crisis to Crisis, which is hosted by Michael Bailey and Jeffery Taylor.  They are taking a look at every single Superman comic published from 1986-2006 and did a great two-part look at the Armageddon: 2001 crossover.  You can find part one here, and part two here.] 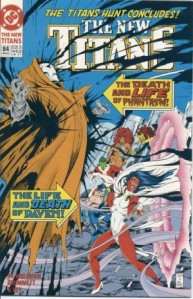 The cover to The New Titans #84, and the last time we'd see the white Raven costume.

I suppose that finding out a spoiler in this way is kind of silly considering that in this day of things being leaked onto the Internet months in advance based on Previews solicitations and message board chatter, but I was fourteen years old at the time and just beginning to make my way through high school.  Comics, at that point, were starting to take over my life, and over the course of the next summer, I would go from budding Titans fan to hardcore comics collector.

So I was still young, and what Wolfman and company had wisely set up in those interim issues and then would really get going in the next few issues kept me hanging on.