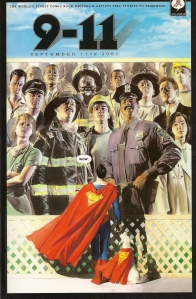 I am not one for commemorative merchandise when it comes to national tragedies.  I mean, when there has been a cause to celebrate, I’ve thought it was cool to own something and at one point I did own a Liberty Coin and have my fair share of World Series and Stanley Cup merchandise from 1986 and 1994.  But the thought of buying a coin made from “real World Trade Center silver” or a coffee table book about the Twin Towers always made me uneasy.  It not only seems a little underhanded to create and sell such products, but it makes me wonder if it cheapens the memories I have of that Tuesday from a decade ago.

Shortly after the attacks of September 11, 2001, artists and writers throughout the comics industry began creating and what came out of that effort were a few publications that were printed mostly to help the September 11 relief fund.  Marvel’s most notable effort was The Amazing Spider-Man (vol. 2) #36, which was literally an interruption of the current storyline for an issue where Spidey and the heroes of the Marvel Universe react to the destruction in New York.  This issue is reprinted in the “Revelations” trade, which is the second volume of J. Michael Straczynski’s run on the character and for what it’s worth is a solid story that doesn’t denigrate those who actually did sacrifice themselves that day.

Marvel also published a small collection of silent stories by various creators called A Moment of Silence, but its Distinguished Competition went a little further and published the second volume of two trade-paperback-sized story collections, the first of which was an independent collaboration done through Dark Horse comics.  I own both of these, but probably because I have always  had company loyalty to DC and because that book features work by creators I’m most familiar with, I have read the DC book more than the others. 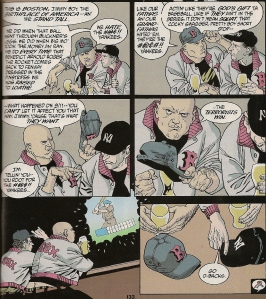 With an Alex Ross cover featuring Superman and Krypto looking up at a poster of firefighters, policemen, doctors, pilots, construction workers, and other citizens and saying “Wow” (an homage to The Big All-American Comic Book #1, published in 1944), DC’s 9/11 book is full of vignettes and pinups that are, as it is billed on the cover, the world’s finest comic book writers and artists telling stories to remember, and is divided into six sections: Nightmares, Heroes, Recollections, Unity, Dreams, and Reflections.  There are a few stories and pinups that feature characters like Superman, Batman, and Wonder Woman, most are deeply personal and share the writers’ personal experiences or even comment on the events and our society’s reaction to them.  One of my personal favorites is “America’s Pastime,” written by Brian Azzarello with art by Eduardo Risso, where two Red Sox fans talk baseball in a bar and one explains to the other that rooting for the Yankees in the 2001 series means the terrorists win.

Yes, I’d say that’s harsh and I only like it because of my anti-Yankees bias, but I also appreciate that in the heavy-handedness of memoriam, there is some levity, which is an honest relief.

Most of the stories do try to be as honest, although some try to be powerful at the same time.  Starting on page 137 and running until page 140 is one of the few Titans stories that Marv Wolfman has written since he left the New Titans in the mid-1990s.  It is a simple story with gorgeous art by by then-Titans artists Barry Kitson and Rich Farber, entitled “This Too, Shall Pass.”  In the story, Raven–wearing her classic Woflman-Perez-era blue costume–meets a young boy named Andy, who father was a police officer killed in one of the twoers.  He carries on about how losing his father is not fair and she shows him the future and how despite his loss, Andy has an wonderfully good life ahead of him. 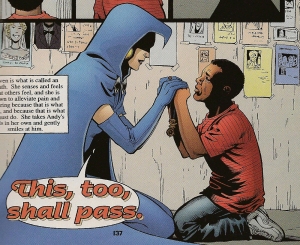 While I am wary of involving super-heroes in a story that involves such events (especially a team whose headquarters’ destruction almost took out half of the East Side), Woflman’s keeping it very simple and having Raven talk to the boy instead of using her healing powers is incredibly effective and makes the story moving.  She plays the role of “guardian angel/grief counselor” here, and in one of the many stories in the collection that feature children, someone whose powers are to be an empath fits right in to a situation where a kid needs someone to listen to and talk to.  Of course, in everyday life, we don’t have healing-powered daughters of demons to show us what the future holds, but Wolfman seems to be saying that conversation in itself is a powerful theraputic tool and that comics need not be considered simple escapist trash but can ben an art form that captures reality in all of its horror and helps us deal with it.

In fact, this comics volume and its companion trade are one of the few 9/11 responses that I felt captured the feeling of those affected by the day.  9/12 was not all flags and Toby Keith; it was shock, tears, and very often an empty feeling of not only knowing what was going on but not knowing what was going to happen next.  And it shows on a basic level why we need artist to help us express what we are thinking, even though I don’t think anyone will ever fully grasp what happened.

Next Up: Back to the 1990s and the aftermath of New Titans #100 with Starfire and Nightwing.