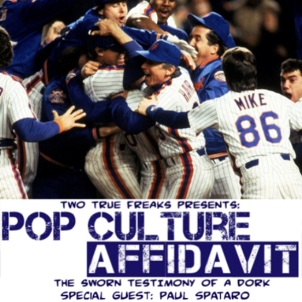 Thirty years ago, the New York Mets beat the Boston Red Sox in the 1986 World Series. For those of us who are die-hard Mets fans, it was an experience that we’ll never forget, and one that we have savored since then, as we patiently (and sometimes even painfully) wait for the Amazins to hoist the World Series trophy once more. Join me and my guest Paul Spataro as we look back on the 1986 season, NLCS, and World Series and share our memories of what it was like to be a kid (in my case) and be at some of the greatest games in Mets history (like Paul).

PLUS … stay through to the end of the show for an exciting announcement about a BRAND NEW PODCAST!!!

And here are some extras for you …

END_OF_DOCUMENT_TOKEN_TO_BE_REPLACED

As of my writing this, we’re about knee-deep in the 2012 London Summer Olympics.  In fact, as I glance over to my television, the NBC Sports Network is showing a U.S.-North Korea women’s soccer match (it was either that or tennis).  I’ve always been a huge fan of the Olympic Games, both summer and winter, especially at how it has me watching and enjoying sports I would never watch otherwise (I went to lunch with some work friends the other day and we watched a water polo match that was on at the restaurant).

This love of the Olympics has its roots in my love of sports, of course, because if I didn’t like sports I wouldn’t care about the Olympics; however, I feel like sometimes I am the only guy who watches the games for the sheer pageantry of it all.  Which is why, by the way, I kept tweeting out snarky bon mots throughout last Friday night’s Opening Ceremonies, pissing and moaning about how badly NBC was mangling their tape-delayed coverage.  In fact, NBC’s fail on this part has been so epic this year it’s like a running joke among tweeters and bloggers, especially those who look forward to the games every four years.

But I’m not going to spend this entry complaining about NBC (that’s what Twitter is for).  No, I thought it might be cool to sit down for a few moments and think about why I am so enthralled by the Olympic Games and why I will spend so much time watching them, even staying up until ungodly hours to watch women’s gymnastics prelims in the summer or a curling match in the winter.  And thankfully it’s not a hard thing to figure out because the very first games I watched were I think the games that people my age think of the most when they think “Olympics.”

Okay, maybe I shouldn’t be speaking for my entire generation but I think that the 1984 Los Angeles Summer Olympics really did come to define “Olympics” for quite a number of Children of the 1980s.

I turned seven in 1984, which meant that this was the first Olympic Games that I actually remember.  I’m sure that people who are even slightly older than me will tell me they have memories of the 1980 Winter Olympics, especially the “Miracle on Ice,” and to that I say that they’re seriously lucky.  Being born in June 1977, I was all of 2-1/2 years old when the underdog U.S. hockey team beat the U.S.S.R. and then Finland to win the gold medal, so if I saw the game against the Russians (which I highly doubt), I don’t remember it at all.  Had there not been a boycott of the Moscow games that same year, I may have seen the 1980 Summer Games, but that wasn’t to be.

The 1984 Summer Olympics soundtrack cassette. This is not available on CD or digitally, so I kind of regret not getting it back in the 1980s when I really wanted it.

So, the summer when I was seven years old and was allowed to stay up slightly later than usual, I saw some of the competition, but most importantly I caught quite a bit of the opening ceremonies.  I don’t know if it was because my parents thought it was important for me to see it or if ABC aired it live instead of on tape delay (which may have been the case — a 3-hour time difference meant it might have aired live; then again, ABC tape delayed the U.S.-Soviet hockey game in 1980 so I wouldn’t put it past them), but I saw quite a bit, including parts of the Parade of Nations (or as my wife put it, “The Model U.N.”).

In my mind, I thought it was the most epic thing I had ever seen (which is saying a lot because I had been watching Star Wars every morning for the past two years).  The audience all had cards on their seats and after a guy came flying in on a jet pack–yes, a JET PACK, which is awesome on so many levels–the PA announcer told them to hold up the cards and the entire stadium was then decorated in the flags of the participating countries.  Plus, you had a theme composed by John Williams that to this day stands as one of my top five John Williams pieces (and next to his NBC News theme, one of his most underrated).  In fact, I loved it so much that when I saw a copy of the soundtrack on cassette at TSS a few years later, I wanted it.  In fact, I coveted that soundtrack so much that I actually took it out of the place where it had been placed and put it behind another cassette on another shelf where nobody but me would find it, not realizing that I probably wouldn’t ever get the money to buy it or that I didn’t have to hide it because it was 1988 and nobody but me was coveting the soundtrack (for the record, I never did get the tape).