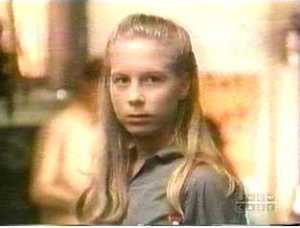 Final still from “Food for Thought” courtesy of Degrassi.ca

My relationship with Degrassi seems to have been more complicated than I originally through.  I mean, it was a television show, it was on when I was home from school, and I watched it.  But it’s not like it was Saved By the Bell, which everyone watched (mainly because it was on.  It always seemed to me that SBTB being on television when you were home from school was like a USA Today being placed at your hotel room doorstep–there was nothing else to do, really.)  In fact, aside from one fleeting moment where I felt cool at the bus stop because the cool older kids had watched it, with the possible exception of my sister, I was the only person I knew who watched Degrassi.

To that extent, I developed sort of a complex.  When other people walked int he room during my Degrassi time, I felt as if I had been caught doing something, even though all I was doing was watching Canadian teen melodrama.  Okay, Degrassi Junior High wasn’t always that melodramatic, but this episode, “Food For Thought,” which tackles the issue of eating disorders, lays it on pretty thick.  In fact, it does that right away, as we open with  Kathleen (one of the more uptight and bitchy Degrassi girls) sitting at the dinner table while her workaholic father and alcoholic mother argue back and forth.  She excuses herself without eating, then goes to the bathroom, looks in the mirror and says, “You’re! So! Fat!”

Snark aside, this is one of those Degrassi Junior High episodes where some of the major tropes of the show show up in force, the chief one being the “lesson” trope.  DJH had an “educational mandate” so to speak, and that meant that the show had to do its fair share of teaching about whatever issue was central to the plot.  Most of the time this was done through a conveniently placed class discussion or a quick moment between two characters (for instance, when Lucy uses a banana to show Caitlin how to put on a condom in School’s OUt!), but here we not only have Kathleen starving herself to the point where she keeps a diary where she berates herself for being not good enough, but the entire school is participating in a science fair and the twins are doing a project about eating disorders.

There’s also a subplot where Heather thinks that Lucy might be anorexic, and whiny, insecure Alexa thinks her dunderheaded boyfriend Simon called her fat (to which I say no, Alexa, you’re not fat.  However, those pants do make your ass look huge.), but this is “meh” compared to Kathleen, who goes hyper-neurotic over the science fair even torturing poor Melanie with her perfectionism.

Melanie, who is the counter-balance “bubbly” friend to Kathleen’s queen of the uptight, uncovers her friend’s secret after she notices that Kathleen never eats anything (and throws up what she does eat) and gets a peek at the diary of beratement.  There’s a confrontation, Melanie suggests that Kathleen talk to someone, and then after the girls only get an honorable mention at the science fair, Kathleen gets upset and runs out of the cafeteria, then faints in the hallway.

So yes, spackle.  but at the same time, it’s not a terrible episode because while it does have a feeling of “Well, she’ll get help and this will all be okay in the end” to it, the issues that Kathleen has an the tension it causes in her friendship with Melanie both do linger as the series moves through the rest of the junior high years and into high school.  And besides, Kathleen’s breakdown and fainting is nowhere near as epic as this:

That’s actually a fair comparison, to be honest.  Jessie Spano is the overachieving one at Bayside High, and she’s clearly compensating for her parents being divorced.  Kathleen’s parents are together but dad is never around and mom is an after-school-special-level alcoholic who stumbles and slurs her way through the episode, clumsily refilling her scotch as Melanie and Kathleen do homework at the dining room table.  So, she has to control something.  She wants to have some recognition, some spotlight, something she can pin on herself:  grades, a science fair victory, being thing.  It gives a little depth to a character who for the most part was up until this point unappealing at worst and one-dimensional at best.

And while “Food For Thought” was no worse than your average Saved By The Bell episode, it kind of epitomizes the feeling that Degrassi Junior HIgh was something that I got caught doing–the first time I saw this one, my friend Tom happened to be at my house and while I’m sure that I wasn’t paying that much attention to what was going on, I definitely got a “What the hell is this?” look from him when Kathleen fainted.  But in all honesty, I’ve grown to appreciate that about this show, that it was something that only I really liked.

You can watch “Food For Thought” as well as every other Degrassi Junior High episode for free on Hulu: