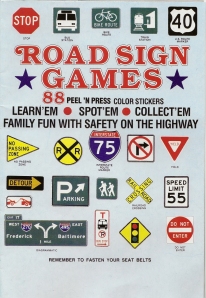 It sounds ungrateful to say this, but there were many times throughout my youth where I was bored off my ass while on a family vacation. oh sure, we took trips to amusements parks and went to places like Washington, D.C. where there was plenty to do at museums, but I remember that for every ride at Disney World or every arcade
game at Weirs Beach, there was an antique shop or glass factory. Plus, there were car rides–long, mind-numbing car rides.

In fact, based on the amount of stuff geared towards keeping kids occupied in the car, I think it’s safe to say that a long, mind-numbing car ride was a rite of passage for much of my generation, possibly sitting in the seat that faced backward in someone’s station wagon. My parents didn’t have a station wagon, so my sister and I were sometimes forced to squeeze into the back seat of my mom’s 1987 Honda Prelude, which as an incredibly cramped fit when you were driving eight hours from Long Island to Williamsburg or to new Hampshire. But we definitely kept ourselves occupied with tapes in our Walkmen, comic books, novels, and travel board games.
These would keep our attention for at least a little while until we got bored enough to stare out the window and count the mile markers or keep an eye out for a Sunoco station because dad was low on gas.

There was one activity that I remember sticking with beyond an hour on I-95 in Connecticut, and that was a folder with stickers titled Road Sign Games. My sister and I first spotted this in a store in Lake Sunapee, New Hampshire during one of our many family outings. Being that it was one of those knick-knack gift shops that seemed to be everywhere in that area of New Hampshire, when we went in, we weren’t allowed to do anything and were instantly bored. Not that we would want to–after all, vases, dishes, scented candles, homemade soaps, and necklaces with runes on them weren’t exactly the type of things that set our world on fire, especially when I would spend most of my vacation each year reading Star Trek novels. 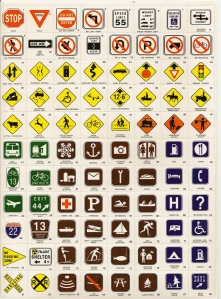 This particular place, though, had toys and games and Road Sign Games was not too expensive, so my parents went ahead and bought one for me and one for my sister. The game was simple, too–contained in a polybag was a folder containing pictures of commonly found road signs along with a sheet of stickers, which you would stick to the matching sign in the folder whenever you saw that particular sign. At a glance, it looks like the type of thing you’d have a little bit of fun with but eventually put away among the sticker books, word searches, and crossword puzzle books that were all bought at one time or another as boredom cures.

But when I was up in New Hampshire that year, completing the book became one of the most important things I had to get done when I was on vacation. My parents would often make us schlep halfway across the state or even into Vermont throughout the vacation and when I realized that I was seeing a number of road signs during these day trips, I knew that I had found my salvation. No longer was I going to spend my time int he back seat fighting with my sister or wondering why there weren’t any good songs on the radio, I had signs to see!

Some of the signs were pretty easy to spot. I didn’t have to go very far to see a stop sign, one way, do not enter, or a speed limit sign; and interstate shield and exit signs would about whenever we traveled long distances. But I had never seen a no passing zone or a pavement ends sign. And so began the quest. on the way to shopping, I noticed that whenever there was a solid yellow line on the side of the road, there would be a yellow triangular no passing zone sign; whenever we hit construction traffic, I saw orange signs; and I noticed how all of the signs around the parks were brown. In fact, I became so determined to finish the road sign game that I walked from our cabin over to Wadleigh State park, where I managed to fill more than a few of  that section’;s stickers. I think i got as far as all but ten stickers before the road sign game was filed away and then either lost or thrown in the trash.

The inside of the Road Sign Games folder where the stickers would go. I still want to find the Fallout Shelter sign.

But I remained fascinated to some degree with road signs, even if I didn’t have the sticker game. Much of this manifested itself in my reading just about every sign whenever I’d drive on a road trip–although I was reading the mile markers to gauge time left in the trip (or in the case of the interminable New Jersey Turnpike, the time left before the next exit)–but right around 2002, I found myself falling down an Internet rabbit hole of road sign websites.

The first one I found was a bare-bones photo site by someone named James Teresco that was called “Why Do You Have So Many Pictures of Road Signs?” From there, I found myself on sites called GribbleNation and AA Roads. I would click an image of a route sign in Ulster County, NY and then head over to see the welcome sign for  Manitoba. At first, the pictures of signs were a novelty but if I was looking at these sites for only the novelty of road signs, I would have stopped surfing pretty quickly. Instead, I found myself looking beyond the signs in the pictures to see what was in the background. Teresco’s site was especially fascinating because beyond the pictures of road signs were travelogues, including a pretty epic trip from New York State to Alaska in 2001.

So suddenly I was seeing the roadsides (and yes, signs) of places I had never even thought of driving or had always wanted to visit, and it helped satisfy the severe wanderlust I was suffering from as a result of life in a cubicle. yes, a roadside in Alberta or somewhere in the Yukon isn’t Maccu Piccu or Newpal, but even the most
mundate places can seem interesting or even exotic when you are stuck at a desk working on PowerPoint presentations all day. At one point, I even tried to take a couple of road sign pictures myself. During my undertaking of walking the entire Mount Vernon Trail, which runs alongside the George Washington Memorial Parkway over the course of a couple of months in 2002, I took plenty of pictures of the signs in the area, and a trip to Shenandoah National Park had me making a stop at white Post, a small town in Virginia with a literal white post at its center. 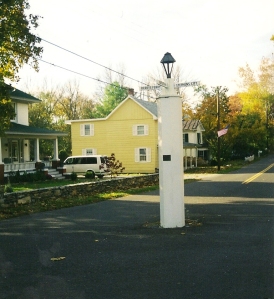 According to Andrea Sutcliffe’s Touring the Shenandoah Valley Backroads, “Legend has it that in 1850, Lord Fairfax directed George Washington to erect a white post near Ashby Gap-Winchester Road to direct travelers to nearby Greenway Court, home of Fairfax’s Library. The post is not the original. It has been knocked down numerous times by unsuspecting motorists. The four locations marked on the post are Battletown, Berry’s Ferry, Greenway Court, and Stephens City.” And that’s pretty much it. It’s a post. In the middle of an intersection. In Virginia. But hey, it’s still pretty cool.

From White Post, I moved on to Front Royal, a small town between I-66 and Skyline Drive that is the type of town that people write songs about. It’s also every small town in New Hampshire and Vermont that my parents would drive through on the way to whatever we’d be visiting during those family vacations. And I remember it having not only a “passing through” feel to it, but also a “last chance” feel as well–as if this is an outpost that you encounter on your way into the wilderness.

I finished that particular trip by hiking in the park and then making my way back to Arlington, making sure to stop at the Krispy Kreme in Alexandria on the way. I’d do a couple of other trips like that here and there and write about them for my old blog, but I left cubicle life a few years later and would eventually leave behind my regular browsing of road sign websites, returning to them every once in a while, especially when I got homesick and wanted to see random pictures of New York City (although street view on Google Maps often helped with that).

And then things came full circle this past Christmas.

My son is five years old and is in that phase where he absolutely loves stickers. if a birthday card has stickers in it, they are all over his shirt by the end of the day. He has spooky stickers for Halloween, Peanuts stickers for Christmas, and more Spider-Man stickers than I can keep track of. So when Christmas rolled around, I thought it might be a fun thing to see if I could track down a sticker-based car game. Surely
there was an updated version of the old Road Sign Games, right?

Turns out I was wrong. There really didn’t seem to be anything that simple. Oh sure, there were “I-Spy” books, but the appeal of the Road Sign Games that I had as a kid was the sticker collecting. So I hit eBay and found … the exact same game I had twenty years ago. We’ve been spotting them, keeping track of them, and while I’m sure we won’t fill the entire book (I’m not sure that we can find a “Fallout Shelter” sign), that’s not to say we won’t try.