Despite what I’m saying in this post, this scene still is awesome.

I think that if I ever actually met him, I would hate Lloyd Dobler. This is a lot coming from me. Say Anything … is one of my favorite movies of all time, so much so that I have the framed movie poster on the wall of my office at home. But with my tendency to over-examine everything I read, watch, or listen to (just like a good English teacher should) and with the film more than twenty years old, I’ve been thinking a lot about Lloyd and Diane Court and I have come to the conclusion that if I ever had to interact with Lloyd, I probably wouldn’t like him.

It’s not like I think he’s a bad guy or anything; on the contrary, there is something genuine about Lloyd and how he pursues and is devoted to Diane throughout the film that makes him great. John Cusack’s portrayal and Cameron Crowe’s writing and directing don’t hurt, either, because he clearly is the hero in the teen romance story and when he is finally with Diane at the end it feels right. But I still can’t help feel some sort of resentment because Lloyd is pretty much every guy I’m not, or ever was; furthermore, he is one of the types of guys who often proves to be the bane of my existence as an educator.

When I was in school, I was not in the clique that included guys like Lloyd. If I was in a clique at all, that is. I kind of simply existed, floating through the lower echelons of the social scale among the dorks. Guys like Lloyd were guys who showed up to school when they felt like it, took general-level classes and probably screwed around but more or less floated by on their way to graduation. They weren’t stupid by any means, but when I was in high school I probably would have assumed he was unintelligent in that way that every honors student with no life looks down anyone in a lower-level class as a way to compensate for having little or no social status. I didn’t have Corey or her 65 songs about Joe to occupy me on a Friday night; I had whatever was on television, video games, and maybe a few rounds of pool with my friends. Lloyd was cool, the dude everyone relied upon, and who didn’t give a crap. I was high-strung, rarely took risks, and should have left the house more.

Of course, he was also my competition.

Let’s consider Diane Court for a moment. Whereas I’d probably hate Lloyd if I met him, if I ever met Diane I wouldn’t hate her, I would have fallen in love with her and this, in turn, would have made me hate Lloyd more. I know this for a fact because I went to a high school with so many Diane Courts. Bright, beautiful, but kind of unaware. Not a snot, but so focused elsewhere that even she doesn’t know how good she would have it if she played into the school’s social status games. In fact, it’s wonderfully appropriate that Heather Chandler herself says that she wouldn’t have pushed herself so hard if she didn’t feel like she was competing with Diane. And if Heather Chandler is the queen, then that makes Diane an Athena of sorts, someone who is not even known until she leaves the halls of Lakewood High School and actually attends a graduation party with Lloyd, after which, they share this exchange:

Diane: Nobody knew me before tonight

Lloyd: They knew of you. Now they know you.

Of course, it makes perfect sense that Diane winds up falling for Lloyd. Even on the surface it works. Girls like Diane fall for guys like Lloyd all the time. Some would say it’s a “sowing your wild oats” type of thing or an “opposites attract” thing. But there’s so much more to it than that. When a drunken partygoer asks Lloyd how she agreed to go out with him, as in “Who are you,” Lloyd replies, “I’m Lloyd Dobler.” Because he is. He’s normal. She’s not.

And that pisses me off.

Because on one level I’m sitting here and agreeing with Chuck Klosterman in that John Cusack’s performance is so good that it gives every guy in the world this impossible ideal which they have to live up to. On another level, though, she should be with me. Why go for someone lower than you when you can have someone of an intelligence that’s on your level? 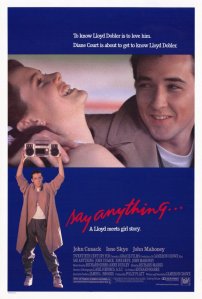 Now the last reason I could say is because of a long-standing grudge against guys like Lloyd and that would seem logical but I really do have a more professional distaste for him. At what is one of Say Anything…’s best scenes—the monumental graduation party thrown by Valhere (Eric Stolz), Lloyd runs into Ms. Evans, his guidance counselor (Bebe Neuwirth) and she asks him point blank if he has any plans at all for after graduation. He dodges the question, saying that his father is in the army and wants him to enlist but he’s avoiding that as much as he can but doesn’t have any plans. Diane’s father asks him the same question a few nights later and he famously responds:

It’s a speech that any slacker teen loves but any parent or teacher hates. And if that’s all that Lloyd is, then I teach about 40 or 50 Lloyds a year. Guys who simply exist. They’re not bad people or nasty or rude, they simply are who they are and their priorities at 17 are not trying to get into Dartmouth or worrying about passing AP Calculus. They’re the guys your principal wants you to make calls home to mom and dad when they’re failing. As a student, it seemed great to want to be one of these guys because they were cooler. As a teacher, these guys are almost too cool.

But the type of guy Lloyd is, you know he works out in the end. Doctor, lawyer, kickboxer, whatever—by the time he hits that 10-year reunion, he has at least made something or himself in that he knows he’s a responsible adult. And that’s why I root for him in the end anyway. In Say Anything …’s very last scene, Diane and Lloyd are on a plane bound for England where she will study as part of a fellowship and he will … well, he’ll be Lloyd. “Nobody really thinks this is going to work, do they?” she asks him.

“No. You just described every great success story,” he replies before they both patiently watch the fasten seat belt sign looking like Benjamin and Elaine twenty years earlier in The Graduate, full of uncertainty but willing to face it. Thankfully for them, this is one of the few times where sincerity works well.