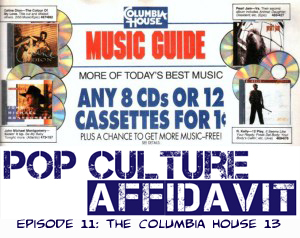 Hey everyone, take advantage of this special offer where you will get a ton of CDs for JUST ONE PENNY!

Does that sound familiar?  If it does, then you’re familiar with Columbia House, the record, tape, CD, and video club that flourished in the 1970s, 1980s, and 1990s and provided mail-order entertainment for America, one person at a time (or at least that’s what the commercial says).

So, this time around, I not only take a look at Columbia House but at my personal experience with Columbia House, as I got my very first CD player when I was sixteen years old (twenty years ago!) and also signed up, eventually starting my music collection with thirteen CDs.

I had very different tastes in music back then.

The following is a list of albums and songs mentioned in the podcast in case you’re interested in actually checking out the music (and if you are interested in purchasing some, use the Amazon link at Two True Freaks) …