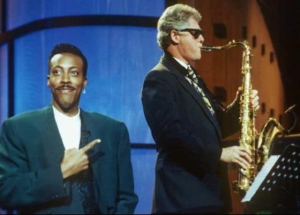 Bill Clinton plays the sax (“we’re Animaniacs”) on The Arsenio Hall Show in 1992, probably the most iconic moment in the show’s history.

While this will date this entry years hence, I guess it should be noted that I’m writing it the same week that Jimmy Fallon starts hosting NBC’s long-running late-night talk show, The Tonight Show.  In the last few weeks there have been all sorts of farewells to both him on Late Night (which is being taken over by SNL alum Seth Meyers) and Jay Leno.  Leno, in 1993, received his first stint as permanent host of The Tonight Show after the retirement of Johnny Carson and the fights behind the camera as well as resulting late night ratings wars between Leno and Letterman (who would go on to do his own show after being passed over for Carson’s) would be one of the more well-known (and notorious) television stories of the 1990s.

One of the biggest casualties of the late night wars of 1993 was The Arsenio Hall Show.  Since its debut in 1989, the syndicated talk show had garnered respectable ratings and was very popular among younger audiences, but when three other late-night shows debuted during that year and many of the CBS affiliates that were carrying Hall’s show picked up Letterman’s instead, the ratings started to take a turn for the worst.  On May 27, 1994, the final episode of the show aired.

Now, when Arsenio was at his height of popularity, I wasn’t a regular viewer of his show.  Staying up that late on a school night was not an option for me in those years, and while I was allowed much later nights in the summer, those were usually spent watching a baseball game.  But if I happened to be up and not watching a random movie and had a desire to watch a late night talk show, I would tune in to Arsenio because like a lot of people who were watching his show, I found Carson to be … old.

And that sounds so pedantic, especially considering that Johnny Carson was such a huge legend in comedy and also considering that I would occasionally tape Late Night With David Letterman and Letterman was Carson’s heir apparent.  But Hall was cool–he must have been since he hosted the VMAs four times in a row (still a record to this date)–and he had guests that I was familiar with.  Granted, I knew who most of the guests on your average Carson episode were, but people I actually might have a chance of watching/listening to with more frequency were on Arsenio.

When Hall’s show went off the air on May 27, I wasn’t watching.  However, I had a good reason not to:  Game 7 of the Eastern Conference Finals between the New York Rangers and New Jersey Devils (“MATTEAU!  MATTEAU!” … oh, sorry … that’ll be another post).

I found the final episode of the show on YouTube and while I’m not sure if it’s the entire show (it’s in three parts and a couple of things do seem to be missing), it’s enough to get a feel for what Arsenio was about for its brief life.  In what I’ve seen, the episode’s format is what you’d expect from a talk show–a monologue and guests (Arsenio wasn’t really one for comedic bits).  The two guests mentioned are Whoopi Goldberg and James Brown.  You don’t see much of Brown–I have a feeling that whomever posted the video missed his performance or it was trimmed down in the original broadcast–and Whoopi’s conversation with Arsenio is about how his show was successful and the cultural impact he had.  Being a horribly naive 17-year-old white kid from the suburbs in 1994, I wouldn’t have been able to say word one about the cultural impact of a talk show hosted by an African-American but with twenty years of life experience and perspective now behind me, I completely understand what she’s talking about.  Hall was not only the first but he was also successful.  No, he didn’t have the long runs that Carson and Letterman had, but five years in syndication and holding on to an oft-fickle youth audience is something to be commended.

But what is most memorable for me about the final episode is actually its opening.  It’s Hall sitting in the studio control room setting up an extended clip sequence.  Watch this and you get a cross-section of pop culture from that period of 1989-1994.  Starting with the very first guest–Brooke Shields, who was still fielding questions about her virginity in 1989–and then moving through a huge compilation of guests, you see a really impressive list.  Hall didn’t seem to limit himself to guests who simply played to a youth audience or a black audience and I was amazed, to be honest, at how I’d forgotten that a number of the people he’d on his show were as popular as they were.  And it also demonstrates how eclectic a decade the 1990s was–or at least how eclectic the early 1990s were (as the decade wore on, it got more and more homogenized) .

And then, when he introduces the more “serious” segments, which is something he did gain notoriety for because these were topics more suited for daytime talk shows and not late-night talk shows:  the L.A. Riots, gang violence, gay rights, Earth Day, D.A.R.E., Bill Clinton’s famous appearance playing saxophone with the band, and Magic Johnson discussing being HIV positive.  It’s not an exhaustive list, but if you wanted to give someone a quick overview of what the early 1990s were like (to a certain extent), this whole pre-show segment would be exactly what you need.   And I hate to say that things like this were what kept me “aware” of the world back when I was a teenager because it makes me sound like I was an ignoramus, but truth be told I was.  I didn’t read Time or Newsweek on a regular basis and my parents didn’t get a newspaper, so if I managed to watch the nightly news, that was about it.  So a story on a talk show or something I caught on MTV while at my friends’ houses might be all of my exposure to real issues.

So in a sense, this episode is a bit of a time capsule for 1994, showing us much of what was in the public consciousness up until that point and being that it is Hall’s last show it also marks the end of that part of the 1990s, which in a big way was 1994.