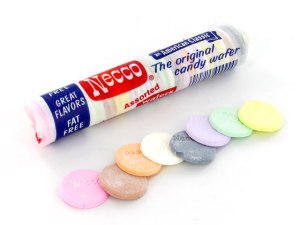 As I have gotten older, I have found that there are some things in my past that are actually better left there.  The quality of certain movies or television shows are the best examples of this, but it can apply to things like food.

From the time I was ten until I was sixteen, I spent a week every summer on Kezar Lake in the extremely small town of North Sutton, New Hampshire.  While it’s not too far away from the larger area of Lake Sunapee, North Sutton is basically comprised of the lake, a bed and breakfast, several homes, and a general store named the Vernondale Store.  When we weren’t swimming, riding our bikes around the lake, or being dragged to a glass factory by our parents, my sister and I as well as our friends would journey up to Vernondale with a couple of dollars to buy baseball cards, Mad Magazine, and candy.

Vernondale stocked a wide variety of candy, but one of our favorites was Necco Wafers.  Wrapped up like a roll of quarters, Necco Wafers are manufactured by the New England Candy Company, or Necco, and have been made sine 1847.  So it’s no wonder they were in such abundance in New Hampshire (another food item, Hires root beer, will definitely get its own post at some point as well).  I’d seen them outside of New Hampshire, but rarely south of the Mason-Dixon line.  There are eight flavors in a roll of Necco Wafers:  lemon (yellow), lime (green), orange (orange), clove (purple), cinnamon (white), wintergreen (pink), licorice (black), and chocolate (brown).

So I was recently at a convenience store and as I made my way from the soda cases to the front counter, I spotted Necco Wafers in the candy rack.  Usually, I would ignore such things, but I felt nostalgic and picked up a pack, then proceeded to write down my reaction to eating each of the eight flavors for the first time in twenty years.

Pink: Well, now I know why I’m able to tolerate the taste of Pepto Bismol.

White: Is this cinnamon?  I’m tasting a little heat here, and it kind of reminds me of when I was a kid and used to suck on cinnamon Certs until I torched the hell out of my tongue.

Black (which  looks more like dark blue): This is obviously licorice and I guess Necco was trying to get me ready for Jager shots later on in life.  It certainly has an aftertaste, so I was prepared for that effect of Jager.

Yellow: This was like alternately sucking on a wafer coated in lemon Pledge and like those old Archway lemon cookies that my dad used to buy in Waldbaum’s every weekend.

Green:  I’ve never eaten a fresh scent Clorox wipe, but I’m pretty sure this is what it tates like.

Brown:  This is obviously chocolate–in fact, they sell entire rolls of chocolate Necco Wafers–but at first it tastes like very little and the actual taste of chocolate sneaks up on you.

Orange: They did a good job here of replicating the flavor of a creamsicle.  In fact, this is probably the way creamsicles are eaten on The Jetsons.

Purple:  Did I just swallow potpourri?

They are, I guess, an acquired taste, and are truly made for a kid’s palate.  Still, my disgust at the flavor gauntlet I ran doesn’t take away from what are some fond memories of vacations gone by.