Pop Culture Affidavit, the podcast that covers everything random in the world of popular culture has finally arrived at Two True Freaks! To celebrate our big move and the podcast’s third anniversary, it’s time for the third annual Baltimore Comic-Con episode! I take a look at the 2014 convention and talk about creators I met, comics I had signed, and what a whirlwind day it was. AND be sure to check out the show notes for all sorts of exclusive pictures!

And a quick warning.  These pictures are pretty large and very self-indulgent.  Enjoy! 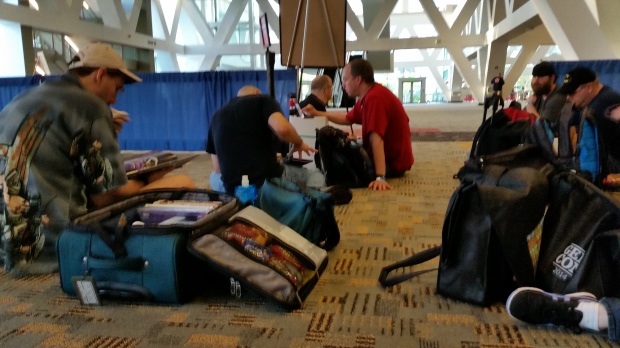 Now, unlike this line, you won’t have to wait.  There’s plenty after the jump …

So I wasn’t lying when I said that I took the official convention map and plotted out exactly where I was going and when.  Granted, I had a total of three hours to wait in line before the con actually opened and I’d forgotten to bring something to read or listen to, so I did this and struck up conversation with other people.  Granted, I had a bag full of comics I could have read, but my excitement meant I couldn’t focus.  I’m pretty sure that this will look less busy this year.  But as I mentioned, a lot of the signings I went for were around the perimeter of the convention hall.  Here’s another, more stylish shot of the map with the convention program. 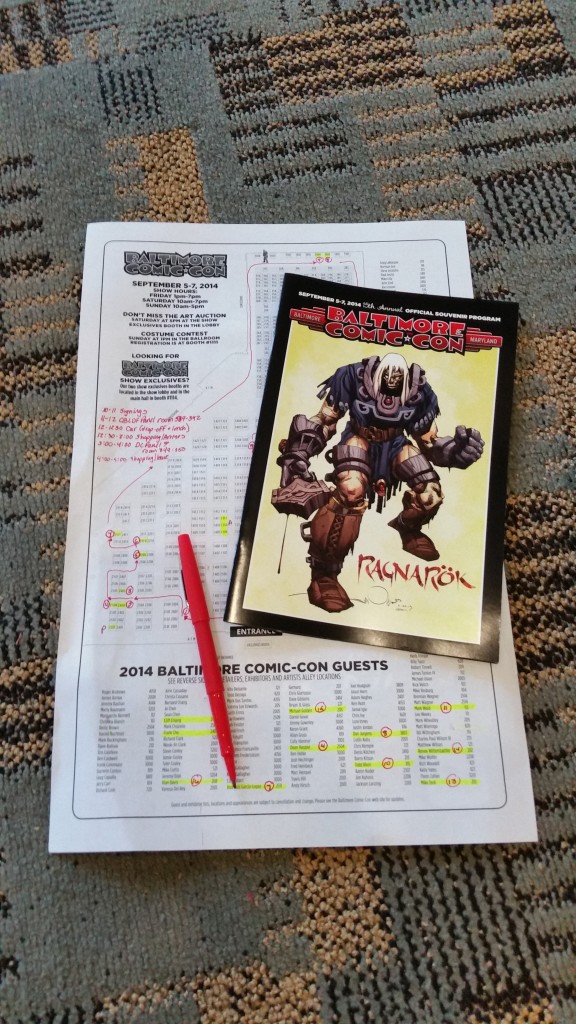 While waiting in line and getting comics signed, I had the opportunity to watch a few artists sketch.  I didn’t get a sketch myself (except for the Adventure Time cover I bought for my son), but it’s always great to take a moment to watch artists at work. 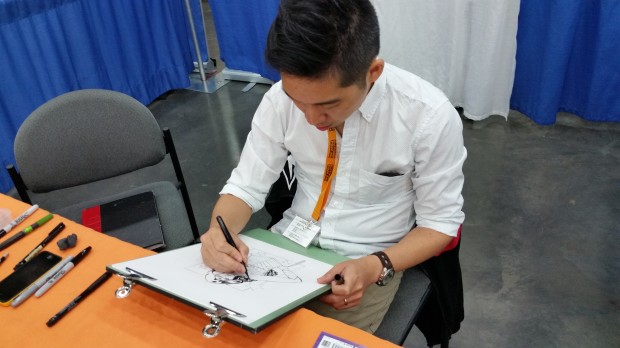 Me with Jose Luis Garcia-Lopez, wearing a T-shirt he drew.

While the Baltimore Comic-Con doesn’t have the huge cosplay showing that a show such as DragonCon does, there were plenty of creative and awesome costumes as well.  I’ve made a mental note to possibly do an entry or future episode about cosplay itself.  It’s not something I’d actually do, but some of the work that obviously goes into these costumes, which is really impressive. 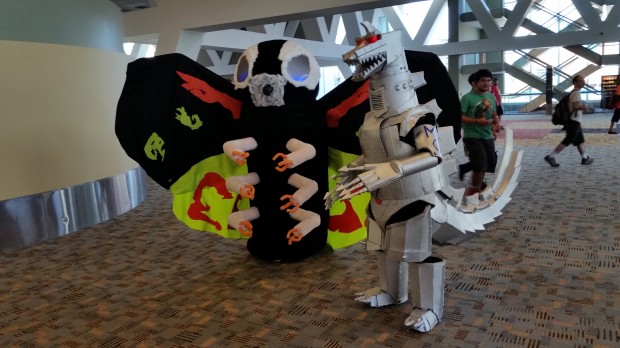 Not exactly sure what these are but they looked pretty awesome.

An alien among some other costumes. 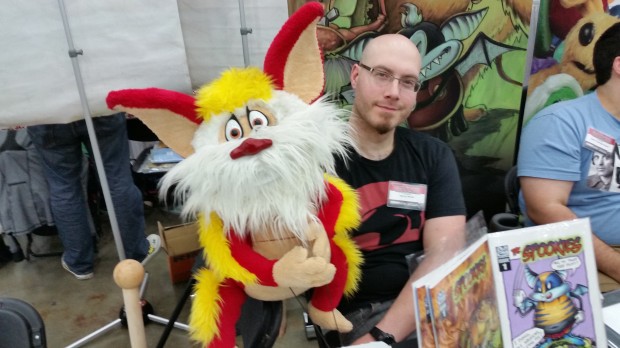 Not cosplay per se, but it’s always cool to see Snarf.

I was impressed by the Nightwing costume. 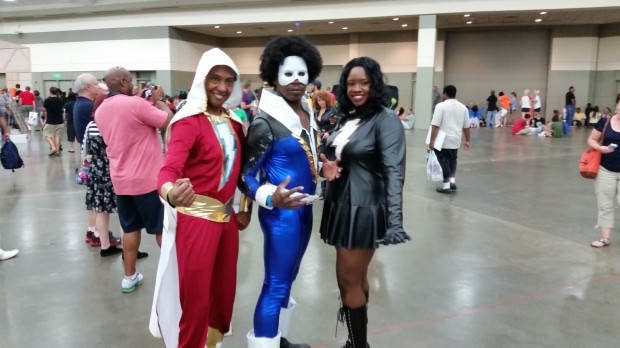 Wonder Woman and Mystique (sorry the picture’s so blurry).

Of course, beyond the creators and cosplay is the haul. I got quite a bit signed and a ton of cheap trades.

The Adventure Time sketch cover I got for my son.

The Titans posters I bought from Bill Walko. 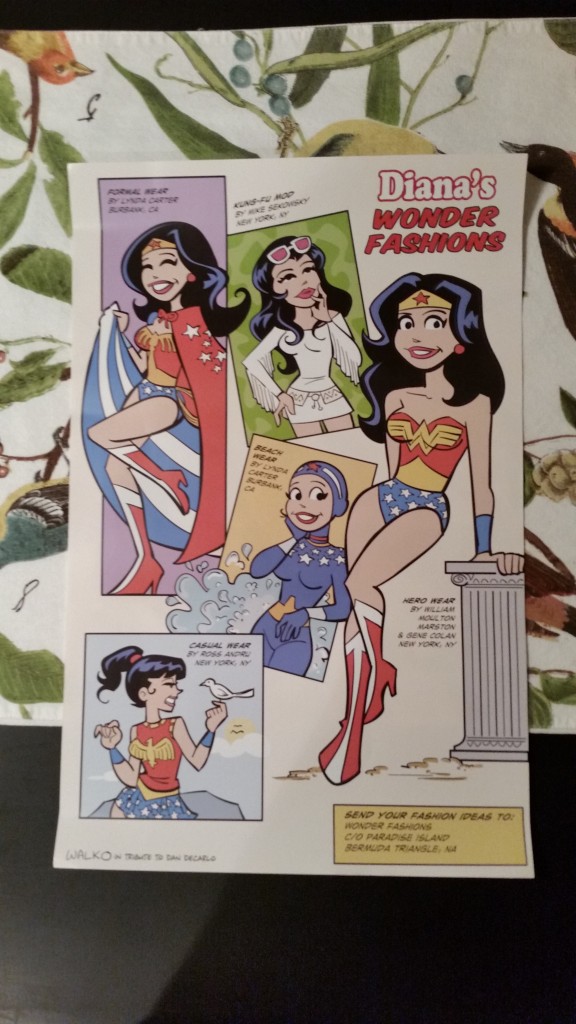 The Wonder Woman print by Bill Walko that I bought for my wife.

I picked up several Strangers in Paradise trades.  And those are my socks.

DC Comics trades that I purchased.

100%, which I had signed by Paul Pope and Dong Xai, the Joe Kubert Vietnam War graphic novel. 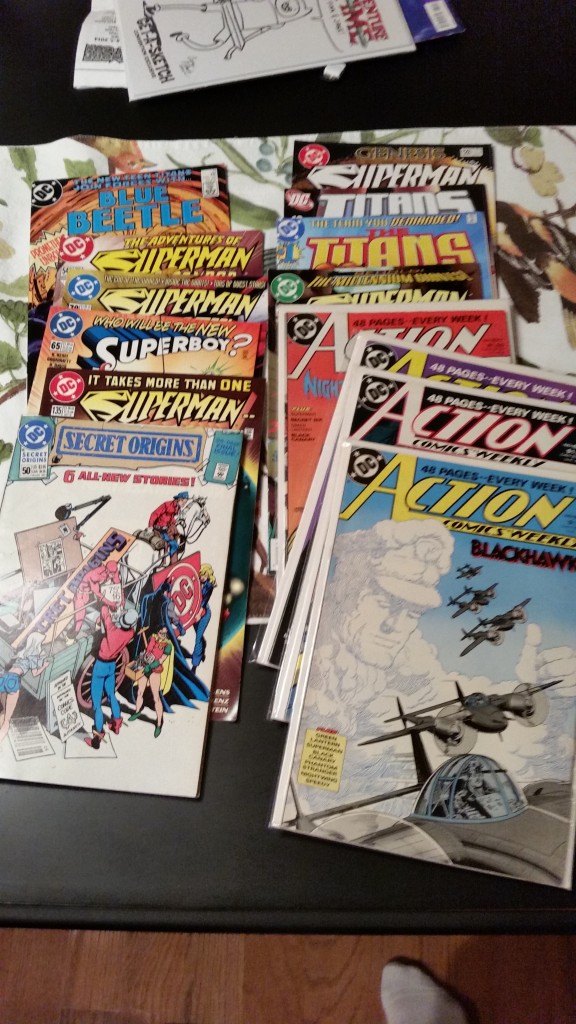 My DC back issue haul.

The Fox, which I had signed by Dean Haspiel.

The Liberty Meadows hardcover and old Washington Post Sunday strip that I had signed by Frank Cho.

Superman books and trades I added signatures to. 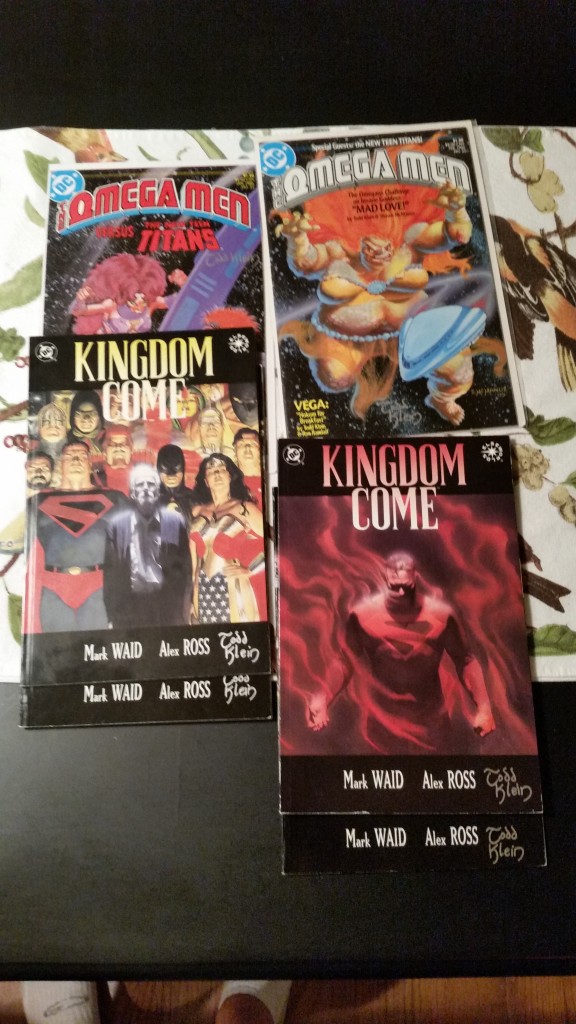 A Death in the Family trade signed by Denny O’Neil.

Several things I had signed by Cliff Chiang.

In the podcast, I mention the book Leaping Tall Buildings, which I’ve brought to the con each year to gather signatures.  Here’s the pages I had signed this time around.