It here’s a Newton’s Law of Moviemaking, it has to be: “For every great movie, there is a much lesser sequel, spin-off, or knock-off.”  In the case of Fast Times at Ridgemont High, it’s the second in the form of a blink-and-you’ll miss-it sitcom from 1986 called Fast Times.

Prior to my episode about the movie, I had only known of Fast Times as a piece of trivia that accompanied articles about the film or the television series’ stars (usually Courtney Thorne-Smith), and it never saw life in reruns or on video.  In fact, if not for the grace of YouTube, the seven-episode run of Fast Times would have remained that way, lost to television trivia history forever.  But as I wound up doing my research about the movie, I found the pilot episode (which has 23,000 views).

With Ray Walston and Vincent Schiavelli reprising their roles as Mr. Hand and Mr. Vargas, respectively, Fast Times attempted and failed to re-create the “slice of life in high school” the movie had given us in 1982.  I don’t know why the producers waited until 1986 to option this and put it on the air, but int he very least, it was at a time when teen flicks were big at the box office and shows like Fame had proven that you could take a teen movie and spin it off to a television show.

Our teen characters are the same as they were in the film but the actors are different, which makes sense considering that many of the stars of Fast Times at Ridgemont High were enjoying successful movie careers in 1986 (Judge Reinhold had already appeared in Beverly Hills Cop, Phoebe Cates had been in Gremlins, and Sean Penn had married Madonna) and were probably too old to play teenagers anymore (although that never stopped Gabrielle Cartheris).  Stacey (Jennifer Jason Leigh in the film) is played by a pre-Summer School Courtney Thorne-Smith, and Claudia Wells (who still had the smolder from her role as Jennifer in Back to the Future) stepped into Phoebe Cates’s role as Linda.  Brad was played by James Nardini; Rat, who is reduced to a couple of “walking through the mall” scenes is played by Wally Ward; Damone, who Robert Romanus embodied so well in the film, is played by Patrick Dempsey; and Dean Cameron (“Chainsaw” from Summer School) plays Jeff Spicoli.

The 26-minute pilot episode begins with a cold open shot from the point of view of Mr. Hand, who is making his way through the halls of the school and then walks into his class.  Spicoli skaeboards in to say he’s on time but is dismayed that someone is in his seat

Mr. Hand then points out to Spicoli that his class was last period and Spicoli says, “That’s cool, you can just mark me early for tomorrow.”

We then get a very late 1980s animated title sequence and a song by Oingo Boingo followed by an opening mall montage that should look familiar because it is recycled footage from the film (in fact it’s the opening of the film where “We Got the Beat” played over several mall scenes).  The movie footage is of such better quality that it seems completely out of place with everything else.

The episode, by the way, is directed by Amy Heckerling herself (who was also credited as a “supervising producer”), so I don’t know if she had a hand in this or was called in on a favor.  We pick up with our characters as we see Damone walking and talking with Rat and giving him typical Damone dating advice. 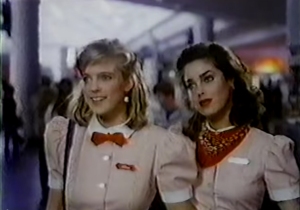 They approach Stacy and Linda, who are cuddling puppies outside a pet store and flirt with them, although at one point Damone stops talking and starts staring at Stacy’s breasts.  Linda tells him that “They don’t speak English” and the girls walk off.

We then switch to Cattle Burger, which is in the mall and which I guess was a way to have Stacy and Brad work in the same general area so that there could be interaction at times (All-American Burger in the film was a free-standing fast food joint away from the mall, where Stacy worked at Perry’s Pizza) and Brad wonders aloud if Linda would ever go out for him.  Brad’s boss (who is played by Paul Wilson, who would be a semi-regular on the later seasons of Cheers) reassures him that she definitely would and later on, we see him talking to Stacy about it in her room.

School starts the next day (set to the same “Be Cruel to your School” song by Twisted Sister that was used in One Crazy Summer).  The teachers commiserate in the faculty lounge.  Leslie (Kit McDonough), who teaches a life skills class, seems to believe in Jeff Spicoli, which directly contrasts Mr. Hand’s assertions that Spicoli is a complete waste of space.  Hand bets Leslie that Spicoli won’t pull through on his presentation later in the week and it seems he may be right when Jeff bursts into the faculty lounge and says, “They didn’t move the bathroom in here.”

Brad, meanwhile, wants Stacy to work on Linda for him and Stacy does, telling Linda that Brad likes her.  Linda says she would  consider dating Brad but she is engaged to a guy in Chicago, after all.  But you can tell that she is more than just considering this when her face lights up at the thought of Brad liking her.

The Spicoli-Hand storyline gets the other majority of the plot, as there is a scene in the cafeteria (set to “Kids Wanna Rock” by Bryan Adams) that showcases his cafeteria food creation skills, and Hand is his usual stickler self, lecturing students on behavior and almost reveling in Spicoli’s inevitable failure.

In Home Ec (whose teacher is played by Twink Caplan, who is a regular in Heckerling’s films and most famously plays Miss Geist in Clueless), Linda agrees to a date as long as nobody knows about it.  Of course, as Brad walks through the mall later that day, he’s congratulated by everyone.

Leslie goes to the beach to talk to Spicoli, who is out surfing and asks if he’s ready for his presentation.  He gives some metaphor about waves but is all, “Sure.  But you can fail me if I suck.” She says she wants him to do a good job for her.

Linda wants to back out of the date, wondering what they’re going to do now that everyone knows, and Stacy says she’ll figure it out.  Figure it out, she does, taking Brad to the one event nobody at Ridgemont will be going to:

They also head to Burger Chalet, where the guy working the drive-thru recognizes Brad and Linda simply has Brad take her home.  She expresses her frustration over everyone knowing about the date and even goes as far as to insult Brad’s cruising vessel.  When she tries to end the date there, Brad gets upset that she insulted the car and asks her to apologize, which she does and then spends a few minutes listening to Bryan Adams’ “Straight From the Heart” on the radio.  Does this lead to them kissing?  We’re not sure, because the screen fades to black.

Back in school, Hand and Leslie wait for Spicoli, who shows up late and then gives a presentation about how teenage boys are scary, starring his younger brother Curtis (played by Jason Hervey).

Spicoli aces the presentation, and even Mr. Hand has to admit that it was good, paying up on his bet.

Now, if there’s a spiritual successor to Fast Times at Ridgemont High, it’s probably the Sara Jessica Parker sitcom Square Pegs (something that is worth its own episode) and not this.  Had this show not used the same characters as the film, it actually might have had more of a shot, but being such a fan of the film, it seems so lesser.

I give Ray Walston credit for trying to reprise his role as Mr. Hand the way he does.  I can tell that on some level, he wants to give him a little more depth and make him a little less harsh than he was in the movie (where he was a one-note character), but he doesn’t have the same chemistry with Dean Cameron as he had with Sean Penn.  Then again, Dean Cameron–who is absolutely awesome a year later in Summer School–has incredibly big shoes to fill and does what he can with it, although sometimes it seems like he’s doing a bad impersonation.  Dempsey, on the other hand, doesn’t even attempt Robert Romanus’ Jersey accent and plays Damone the same way he would play Ronnie Miller at the height of his popularity in Can’t Buy Me Love.  I’ll give Claudia Wells credit, though.  She’s always been one of those gorgeous 1980s actresses you wish you could have seen more of (see also: Mia Sara, Amanda Peterson), and she makes Linda very likeable.

Brad and Stacy, though, are just badly mischaracterized.  I like Courtney Thorne-Smith, mind you, but Jennifer Jason Leigh portrayed Stacy in a way that embodied the “Fast Times” of the film’s title, and Thorne-Smith is just a little too innocent.  Plus, the two of them didn’t have a very close relationship in the film.  Yes, Brad picks up Stacy after the abortion, but as I mentioned in the podcast episode, that’s a big brother move.  Otherwise, they were always separate, intersecting when it was necessary, which is something that two siblings of those ages would definitely do (I speak from experience).  Brad hanging out in his little sister’s room asking her for flirting advice?  Sorry, no.

I said at the beginning of this post that Fast Times is a little piece of trivia associated with the movie and that’s pretty much accurate.  You’re not going to fall in love with this sitcom and wish it had a longer life.  It’s not horrible by any means; instead, it’s simply forgettable and you’re better off renting the film.

Some clips are available on YouTube from time to time along with partial or full episodes.  Unfortunately, the pilot is not.  But here is the opening credits sequence:

My Tweets
Join 868 other followers