The summer 2015 recap continues with a Walt Disney World episode! Join me, Amanda, and Brett as we head to Orlando in July and cover past and present vacations, what we loved doing, what we loved to eat, and a little bit of Agent P’s World Showcase Adventure!

Here’s where to listen:

And now for some bonus material!

During the show, I talk about my past experiences at Walt Disney World and also read the section on the now-defunct EPCOT Center ride Horizons found in Walt Disney World: A Pictorial Souvenir, which was published in 1984 and I received either right before or during my first trip to Walt Disney World in 1985.  Below are some scans of the book for you all to enjoy.

The beginning of the section of The Magic Kingdom, featuring a gorgeous evening shot: 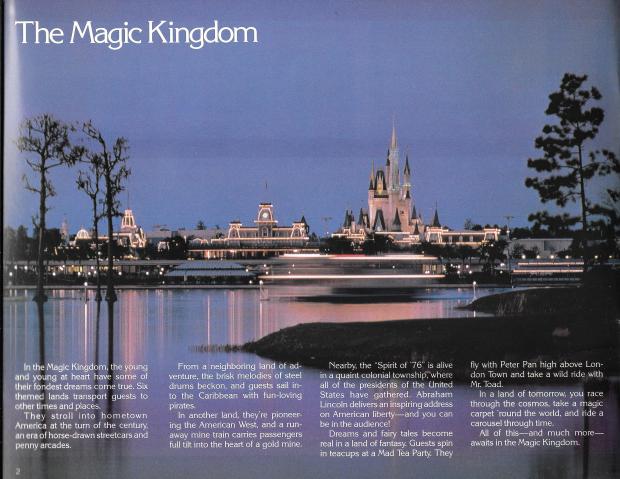 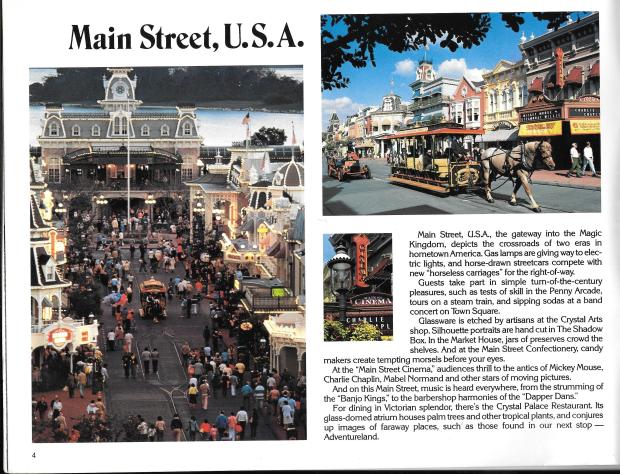 Two of the pages on Fantasyland.  I chose the first because of that gorgeous shot of Cinderella’s Castle with the purple sky behind it.  The second, I chose, because it has a picture of the skyway that ran over Fantasyland but closed in 1999 (fun fact: Disneyland had a similar skyway, which took you through the Matterhorn, which sounds awesome): 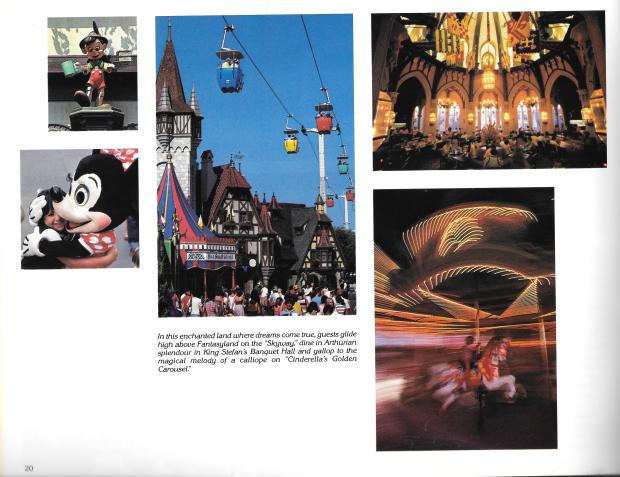 A quick look at Tomorrowland, which is definitely one of the lands of the magic kingdom that changed the most since I was a kid.  I rode the Astro Orbiter for the very first time this year, although I have to admit that part of me wishes I’d ridden it back in the day when it had its classic look: 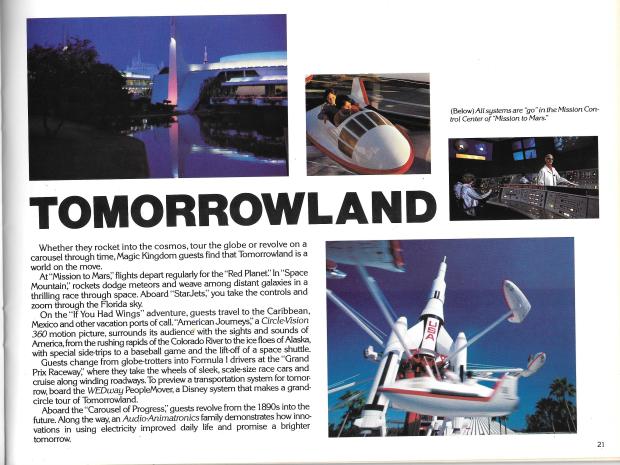 The opening of the EPCOT Center section of the book, complete with the old EPCOT Center logo.  I own two vintage-style T-shirts with the logo: 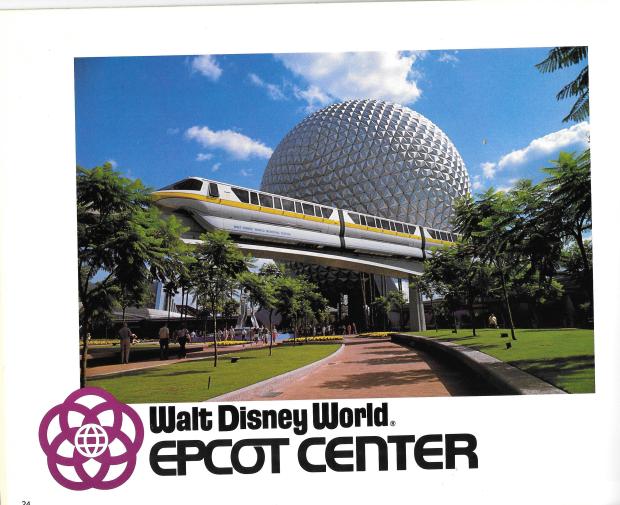 The two-page spread about the EPCOT Center attraction known as Horizons.  This is the section of the book I read on the air.  A little more history about Horizons:  it opened in 1983 and was part of the “phase II” of EPCOT construction/attractions.  It closed in 1994 but was reopened in December 1995 and then closed permanently in 1999.  The attraction was completely disassembled and demolished and is now the home of Mission: Space.  You can see some of the pieces of the Horizons ride on display in the lobby of Walt Disney: One Man’s Dream theater in Hollywood Studios.

Another defunct ride in EPCOT is the GM-sponsored World of Motion.  This was one of the original EPCOT Center Future World rides before it closed in 1996.  The building still remains, as it was refurbished for what is now the Chevrolet-sponsored Test Track: 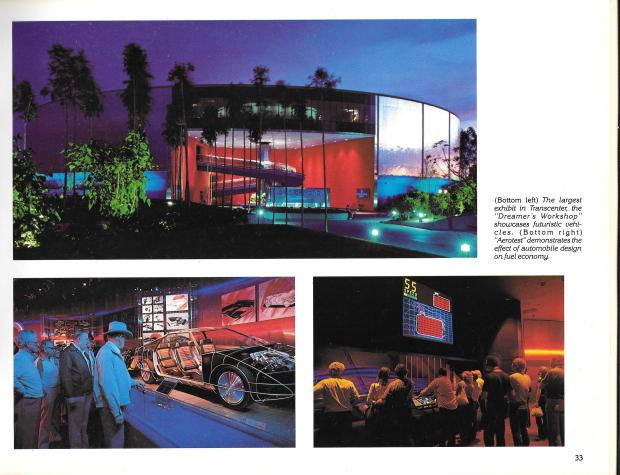 CommuniCore is the original name for what is now known as Innoventions in EPCOT’s Future World.  The buildings haven’t changed in structure–they are still two half-circles right behind Spaceship Earth–and there are still restaurants and gift shops.  The original exhibits were more thematically linked to the various pavilions in Future World, but the Innoventions ones seem to be more of their own thing.  If I may editorialize for a moment, I hope something more interesting is done with Innoventions because while some of the exhibits and interactive games are pretty cool, it seems like there is a lot of wasted space in those buildings:

The page on Canada in the World Showcase.  Because Canada is awesome, has one of my favorite gift shops in EPCOT, and there’s a guy playing a tuba: 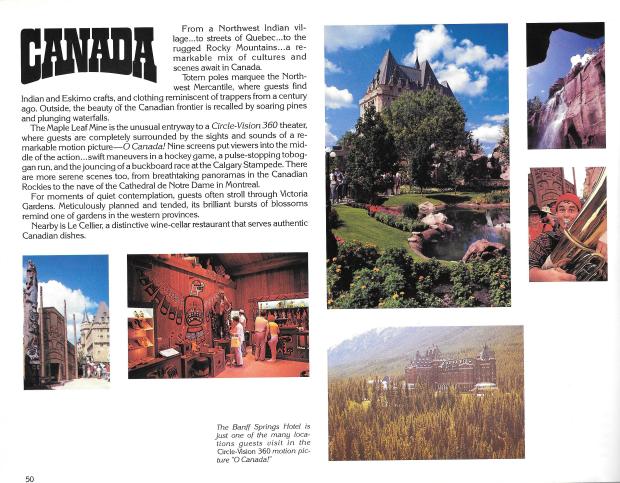 One of the souvenir guidebook’s pages on the Contemporary Resort hotel.  This one was always a personal favorite of mine, as I think it is with a lot of kids, because it’s the one that the monoral drives through. 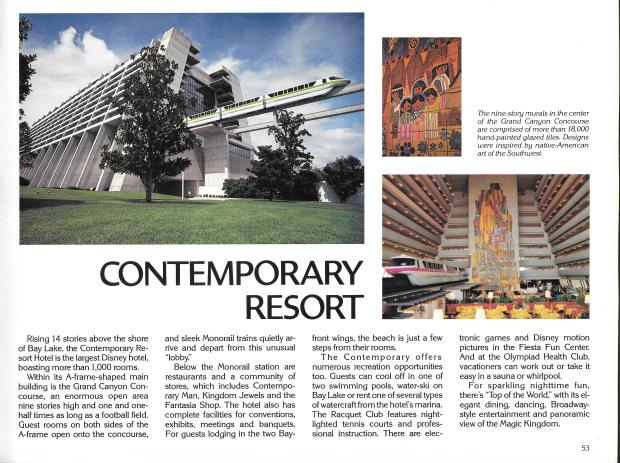 Here are some pages on Discovery Island, the now-closed zoological park that was part of the Walt Disney World resort until 1999.  And if you’re interested in more, here’s a link to a blog post by Shane Perez, who explored the closed facility in 2009:  The Photography of Shane Perez — Discovery Island:

River Country was Walt Disney World’s first water park and operated seasonally until November 2001.  It was scheduled to reopen in 2002 but that never came to be and the park now sits abandoned:

One of the other resorts that you could stay at in 1984 was the Golf Resort Hotel.  The property has since been sold off and from what I can tell is no longer part of the Walt Disney World resort; however, if you’d like a trip down memory lane, the blog Passport to Dreams has an excellent post about it from 2012:  Passport to Dreams–Return to the Golf Resort: 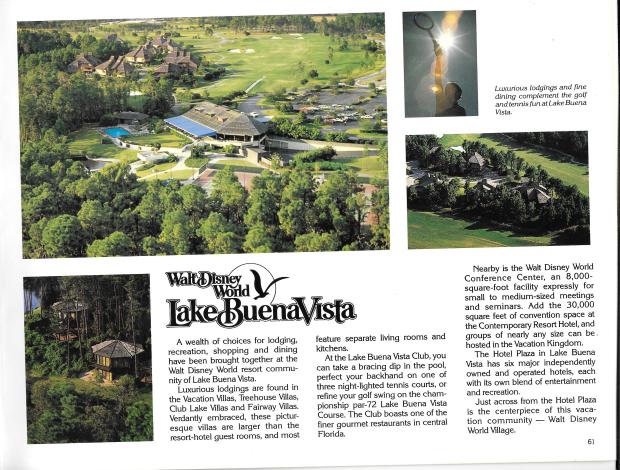 Finally, a look ahead at what was coming to Walt Disney World in 1986, the new EPCOT Center Future World attraction known as The Living Seas: 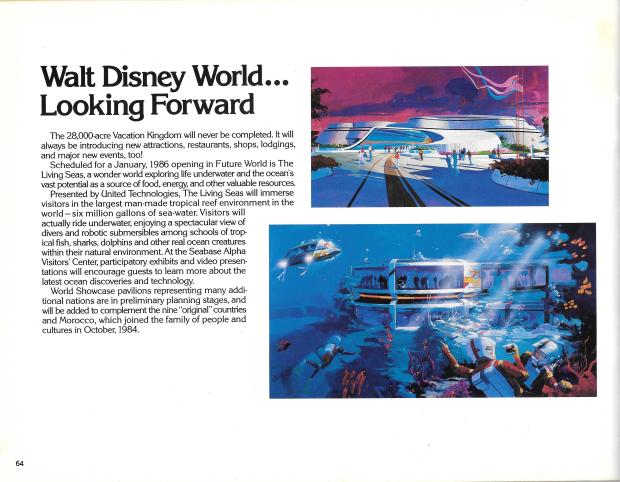