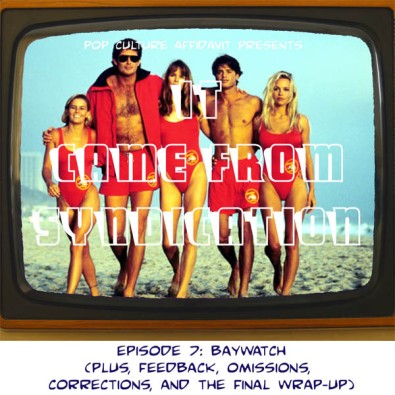 Its the SEVENTH AND FINAL EPISODE of the seven-part miniseries IT CAME FROM SYNDICATION! This time around, I wrap up my look at syndicated television of the 1980s and early 1990s with a look at a show that was a worldwide phenomenon and one of the ultimate examples of a syndicated television series. It’s the legendary David Hasselhoff series BAYWATCH. I take a look at a few episodes from the show’s third season, where Nicole Eggert, Pamela Anderson, and David Charvet joined the cast. It’s lifeguards making rescues and trying to navigate a high school where the queen bee is … Jessie Spano? Oh yes. It’s amazing.

I also take a look at listener feedback, make some corrections, note some omissions, and have a few final thoughts to wrap up the whole series.