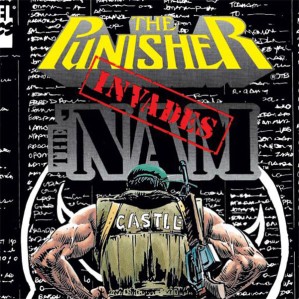 Six episodes and a wake-up!

It’s time to do another tour with Frank Castle as I look at two separate Punisher storylines from the 1990s.  First up is the trade paperback The Punisher in The ‘Nam: Final Invasion, a post-cancellation publication of what was supposed to be issues #84, 85, and 86 of the series.  In it, Frank re-ups for another assignment and takes on a mission to rescue a group of POWs from a NVA camp called “The Death Hole.”

The second storyline is a five-parter from Punisher: War Zone #26-30 where Ice has to rescue Frank when he is captured by a powerful gangster who runs a cartel on an island nation in Latin America.