Being that this is now my eighth year covering the Baltimore Comic-Con and the twentieth convention overall, I feel like I’m kind of an old pro at it.  After all, I have my whole system of con prep, arrival, and departure that allows me to maximize my time on the floor.  And I’ve brought my son, Brett, along with me for the past four years.  Still, I find that the convention can be full of fun surprises even though it’s reliably consistent. 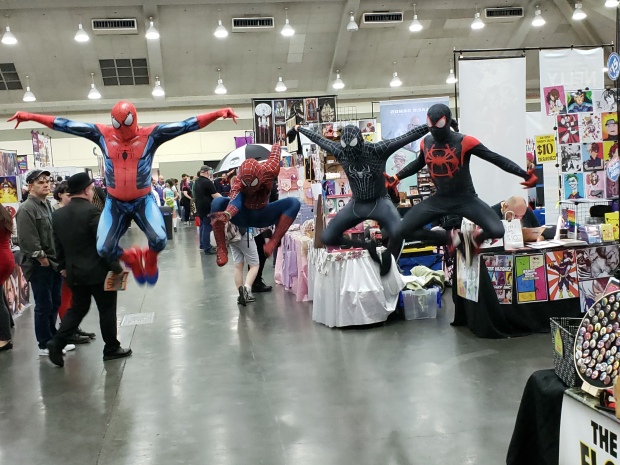 Easily one of my favorite photos from the convention and not just because I caught these guys in peak Spider-pose.

The biggest change this year was in the date and some of the challenges that came with it.  Whereas the con’s been taking place in September for the past few years, the date was moved to the weekend of October 18-20.  This didn’t cause much of an issue for me when I was planning things until I found out that the city had allowed the Baltimore Marathon to take place that Saturday, which is probably the busiest day of the convention.  Now, I place the blame squarely on the city (having gone to college in Baltimore, I’ve come expect such moronic mishaps from the city), but all it really did for me was make me change the location of my parking garage via SpotHero.

Why no real inconvenience there?  Well, the organizers of the convention saw ahead of the problem and sent a well-detailed email to their subscribers with information about road closings and where to find available parking.  And while I realize that there were many people at the con who were  staying the whole weekend and had a hotel room nearby, there’s a lot of regional visitors who are only “day traveling” from the Maryland/DC/Virginia area (sorry, I refuse to refer to it as “The DMV”), so I appreciate the communication that made me slightly less anxious than I usually am.  You know, so that I could focus on what I might get anxious about. 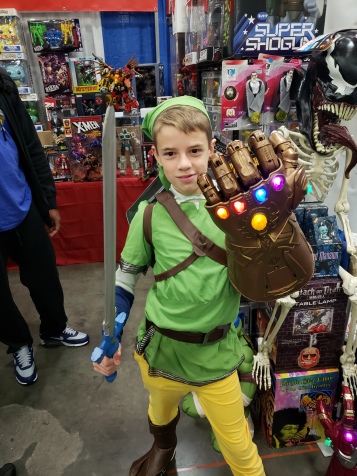 So he wasn’t interested in the panels we were there for, but he did help with crowd control.

All right, keeping a twelve-year-old boy entertained while standing in line to meet comic book creators and getting podcast footage isn’t something to be that anxious about, especially considering Brett’s on the podcast episode that is going to come out next week, so we can hear about the fun he had.  But if I’m making suggestions to the convention organizers, it would be to consider what is there for that “tween”/”young adult” demographic.  We absolutely love the efforts they take to make sure that the convention is family friendly and the Kids Love Comics area was a favorite for the past three years, but now he’s at that age where he’s between the kids comics and the more adult stuff.

One of his first years there, he met Kazu Kibushi, who is the best-selling author of the Amulet graphic novels and went to his panel.  But beyond that and other creators who write for kids in the upper elementary/lower middle school grades, it’s hard to suss out what’s going to pique his interest or figure out what he’s not too old or too young for.

And I’m totally nitpicking here because he was totally psyched to cosplay again this year and had a great time shopping for comics, posters, and pop figures, but it would be great to see some more panels devoted to YA-level stuff.  Perhaps the convention could spotlight a few YA authors like they did with Kibushi?  Who knows, they might get Raina Telgemeier or someone like that one year (hell, I’D stand in like to get Raina’s signature).  Those tween years are such a weird age and mainstream comic books (i.e., the big two) have had a hard time holding on to the kids who loved superheroes, often losing them to other companies such as Scholastic’s graphic novel lines and a mountain of manga.  So as much as we need old geeks like me getting all “Chris Farley Show” with Marv Wolfman, we need those twelve-year-olds with their copies of Amulet, Drama, or Wings of Fire.

One of my favorite things I saw for sale:  Dark Helmet!

But like I said … nitpicking.  Plus, if anything, I saw the programming schedule and wished that I had taken a day off from work and gotten a hotel room because some of the panels were incredibly interesting.  Aside from the always appreciated creator spotlights (Brian K. Vaughn, Howard Chaykin, William Stout, Clinton T. Hobart, Ty Templeton, and Jim Lee, among others) as well as some very useful “how-to” panels (writing, drawing, and publishing comics were all highlighting, although I think there’s room for a “reviewing comics” or “podcasting about comics” panel or two … hint hint), there were topics that I never thought I’d see at a convention.  Had I been there on Friday, I would have gone to “Depression and the Creative Mind” or Sunday’s “Loading Snacks: Being Comfortable Being a Geek.”  Those are some heavy topics that can be deep discussions and I really hope they were well-attended because while I wasn’t able to go, they’re the types of conversations that we so need in our community.

So if anything, I’ve got incentive to return and maybe take on another day if I can spare the money and time.  It’s a show that gets bigger every year but has not lost sight of the purpose of a comic convention and while I admit I had a few moments of “I’m overwhelmed and don’t know what to do next” while there on Saturday, I never had a dull or bad moment.

Stay tuned for episode 102 of the podcast, coming this weekend, where I get into more of my con experience as well as Brett’s, and I talk to Steve Conley (The Middle Age), Thom Zahler (Love & Capes), Brenden Fletcher (Robotech Remix), and William Rosado (The New Titans).

It’s that time of year again! I go back to Baltimore for the 2018 Baltimore Comic-Con. And this time, I’m not alone! Join me and Brett as we meet Tom Grummett, Karl Kesel, Mike Zeck, and Terry Moore. Plus, we get to talk with author Andrea Rose Washington, author and artist Javier Cruz Winnik, artist Luke Daab, and spend the day with fellow comics podcasters Gene Hendricks, Stella, and the Irredeemable Shagg! It’s one of the most jam-packed convention episodes yet and it’s here just for you!

Join me this episode as I talk about my trip to the Virginia Comic-Con in Richmond on March 4 where I hosted a lecture about “Comics Podcasting 101” and also had the opportunity to interview Gary Cohn (Amethyst, Blue Devil) and comics journalist and writer Bob Sedaro.  Plus, I have some listener feedback!

You heard from the kids, now it’s the grown-ups’ turn!  Join me and Gene Hendricks (The Hammer Strikes) as we recap our time at the 2017 Baltimore Comic-Con.  We talk about creators we met, comics we bought, and our chance meeting with Darren and Ruth Sutherland of the RaD Network.  Plus, you’ll hear me talking to comics legends Marv Wolfman, Michael Golden, Jerry Ordway, and Joe Staton.

Some pictures of our quick podcast meet-up, a picture of Brett with Walt and Louise Simonson, and the comics I had signed and some that I bought.

Your TTF hosts for this episode. It was great meeting Gene and his family. 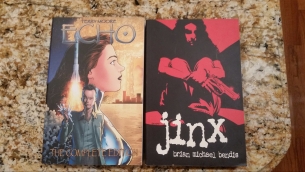 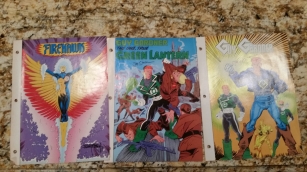 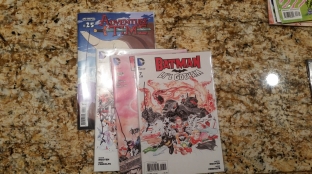 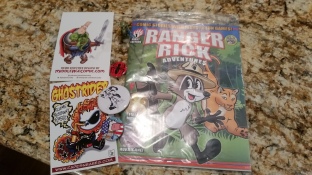 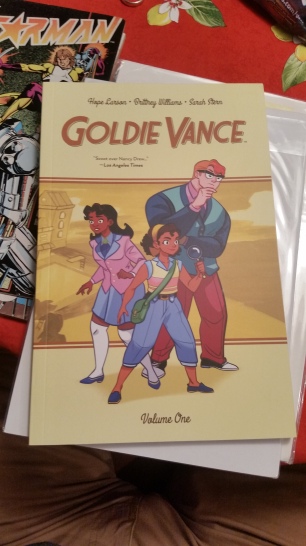 For the second year in a row, I took Brett to the Baltimore Comic-Con.  This time, dressed as Captain America, he once again conquered the Kids Love Comics pavilion as well as sat in on a panel about the Amulet series of graphic novels.  Hear what we learned about creating comics, who we met at the con, and what we bought!

And here are links to the creators featured in this episode: 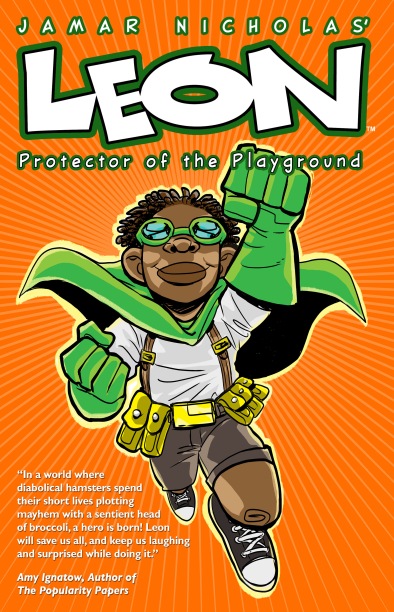 Leon, Protector of the Playground by Jamar Nicholas 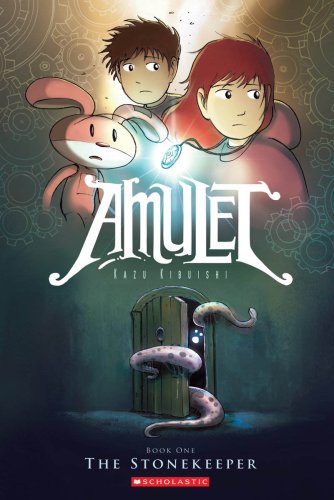 And here’s a photo gallery of cosplay from the con! 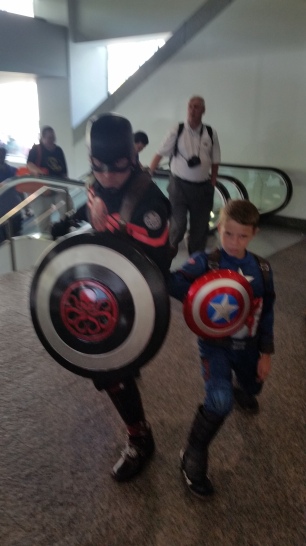 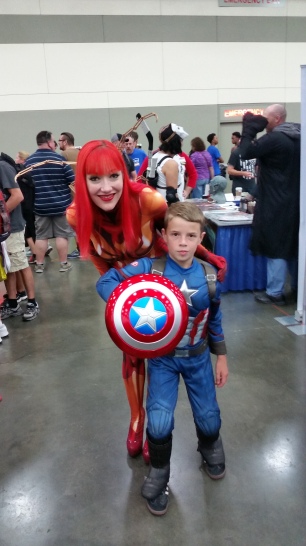 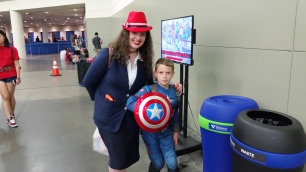 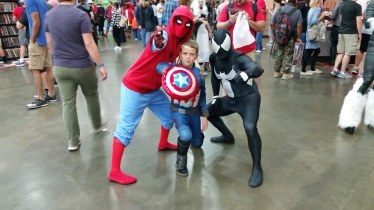 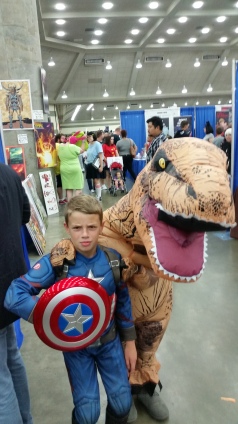 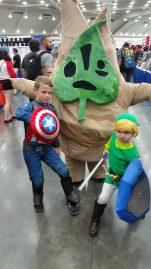 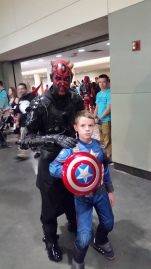 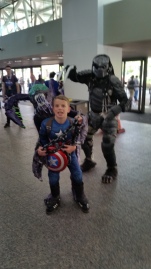 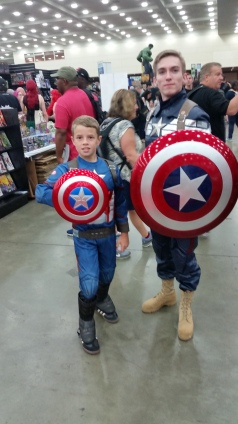 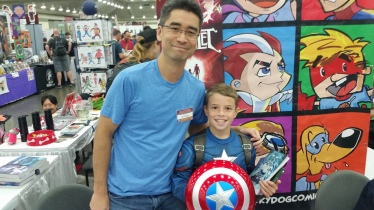 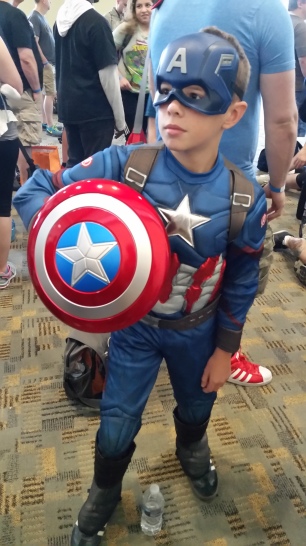 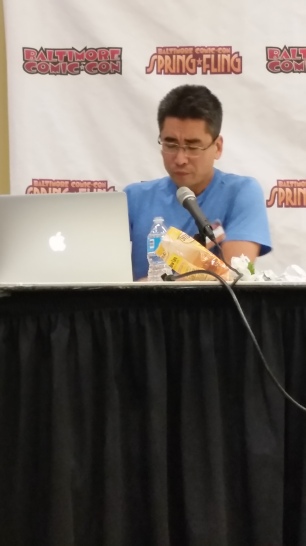 A quick note:  My apologies for my rather lackluster voice in my segments; I’m fighting that beginning of the school year thing where I come home with a perpetually scratchy voice.  And I hope the echo in the Amulet panel segment isn’t too distracting–the room was quite large.

Tune in next episode for part two of my coverage, when I talk to Gene Hendricks about our con experiences! 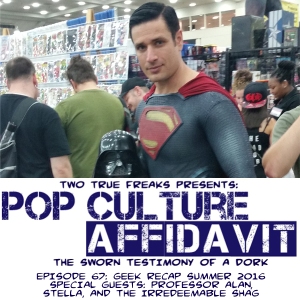 More con talk! I wrap up my coverage of the 2016 Baltimore Comic-Con by sitting down with Professor Alan to talk about our experience at this year’s convention. We discuss con prep, creators we met, what we bought, and what we thought. Then, join me, Stella, and The Irredeemable Shag for a conversation over Mexican food during Shag’s recent visit to Charlottesville. Plus … listener feedback!

It’s that time of year again–time for the Baltimore Comic-Con! And this time, I’m not alone!

In the first of two episodes covering this year’s convention, I am joined by my son, Brett, as we take a look at the Kids Love Comics portion of the Baltimore Comic-Con and he experiences his very first convention. Along the way, we have footage from the “Create Your Own Superhero Logo” session as well as the “Scribble Scramble” competition. Plus, creator interviews with Franco (Aw Yeah, Superman Family Adventures, Tiny Titans) and Alexis Fajardo (Kid Beowulf). AND … Brett winds up on TV! Come check it out; it’s loads of all-ages fun!!!

If you’re interested in the people who were on the podcast, either as panelists/session hosts or who were interviewed, here are some links to their sites:

Carolyn Belefski, who hosted the “Draw Your Own Superhero Logo” session.

Franco, artist of many comics including Tiny Titans.

Plus, below the jump are some pictures of cosplay and the convention from this past Saturday. Thanks again to the Baltimore Comic-Con for putting on such a great show!