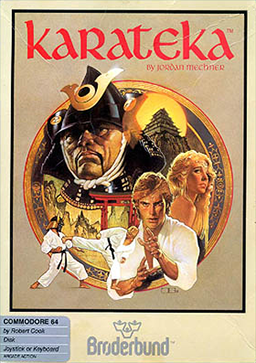 So my relationship with video games can be summed up in two words:  I suck.

No, seriously.  I suck.  On levels not known to normal men.  It took me fifteen years–yes, a DECADE AND A HALF–to beat Super Mario Brothers.  I don’t think I have ever won a single game of Madden.  Shit, I can barely beat two or three stages of Pac-Man without using all of my guys.

I blame my parents for this one, honestly.  If they had listened to my demands when I was a seven-year-old and bought me an Atari 2600, I would have had plenty of time to improve my dexterity and my hand-eye coordination, and also would have had more time to practice for when I had to be good at stuff for the Nintendo.  Instead, I got my NES system at the end of elementary school and what little exposure to video games I had before then came through being at friends’ houses or having a pocketful of quarters whenever I went to a birthday party at the local bowling alley (at a future date, I will write about my love of the Star Wars video game machine at the Sayville Bowl).

Granted, my crap record with video games a) isn’t all crap because I kill at Tetris; and b) isn’t all bad because I also love a good round of pinball.  So it’s not like I was deprived or anything.  I just wasn’t one of those kids who was exposed early on to home systems, either on an Atari or a personal computer.  Although during those first few years of my discovering entertainment for what it was, absorbing movies and television (and later music and comic books), my parents did at least give it a shot.

I think it was my father who wound up getting the computer when I was about seven or eight.  It was manufactured by the Franklin computer company, whose forte was creating clones of Apple computers.  I am not sure what the exact model of the computer we had was, but it was a clone of one of the Apple II series, so it was either an Ace 500 (the Apple IIc) or the Ace 2000 (Apple IIe).  The computer had a 5-1/4″ internal floppy drive and an orange and black monitor that turned on like a television, and when it was time to load the game, you had to make sure the floppy disk was in the drive and since the computer had been second-hand (I don’t think he purchased it so much as they were unloading it at work — my mom would do something similar with a computer late in high school, but that one had a green screen) it always didn’t  boot up when you wanted to.  You’d turn the computer on and wait … and wait … and wait …  Then you’d turn it off again.  And you’d turn it on again.  And wait … and wait … and wait …  Then you’d turn it on again.  If you hadn’t given up and left the computer alone, it might boot up on the third or fourth try.  Then you’d get the “Broderbund Presents” screen and you were off and running with the only game we had:  Karateka. 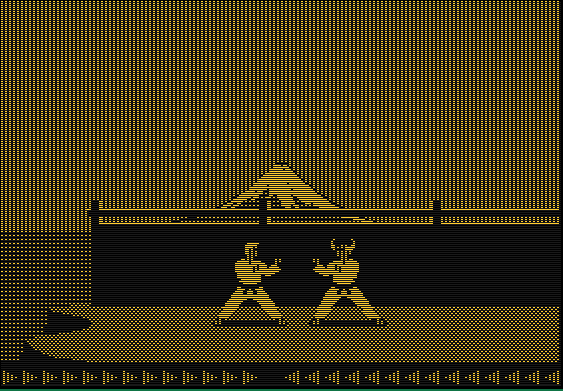 How Karateka appeared on my Franklin computer.