In this episode, I step in to take on the only miniseries from that time that you’d expect, which is The Return of Donna Troy. But in order for you to actually understand how and why Donna Troy is returning (and where she went in the first place, you need to know the answer to the age-old question … “Who is Donna Troy?”

And trust me, the answer is complicated.

Join me as I look at Donna’s origin and history through its most important phases–the swingin’ ’60s original Teen Titans, the Wolfman-Perez classics “Who is Donna Troy?” and “Who is Wonder Girl?”, and even the Nineties where she was the victim of crossover shenanigans and John Byrne.  And that’s just a warm-up for my coverage of the four-issue miniseries that’s written by Phil Jimenez, penciled by Jose Luis Garcia-Lopez (praised be his name) and inked by George Perez.

This episode is just one part of a huge podcast crossover for JLMay 2020.  Be sure to check out the following shows over the course of May to continue the epic coverage of the event before the event.

Also, if you are listening to these shows and digging this podcast crossover, be sure to use #JLMay2020 if you’re sharing these episodes on social media.

When you have a comic book title that has a big mystery such as the identity of a major character and you finally reveal the answer to that mystery, you are then faced with an almost unbearable burden–following it up.  In some cases, it goes well and that reveal becomes another notch in the belt of a classic creative team.  Most of the time, however, it marks the beginning of the end.  Though it is not entirely the creative team’s fault, Team Titans definitely falls into the latter, as it only lasted four more issues after the revelation that Monarch was the mysterious team leader.

Now, from what I understand, Jeff Jensen and Phil Jiminez had taken on a flagging title and wound up being forced into a corner by DC editorial by way of Zero Hour: Crisis in Time, a “This Changes Everything” type of crossover that had a lead-up of a few months in some of DC’s titles, especially those that starred the Legion of Super-Heroes or had crazy continuity problems, such as Hawkman.  Team Titans joined that group of titles because since the book was on the chopping block, the teamers were going to be playing a part in Zero Hour and the story that runs from issue 21-23 winds up being a crossover lead-in with the series’ final issue being an actual Zero Hour crossover.

The story that was told, which set up the Teamers as unknowingly working for Monarch and that included character changes like increased aggression from characters like Kilowatt, a darker and more mysterious attitude from Prester Jon, and an actual physical transformation of Carrie Levine, a.k.a. Redwing as she morphed from a girl with wings into an actual man-bird beast renamed Warhawk.  But before we even were to get to that point, we had to sever the most important connection that the Team Titans had to its parent title, and that is Donna Troy. END_OF_DOCUMENT_TOKEN_TO_BE_REPLACED 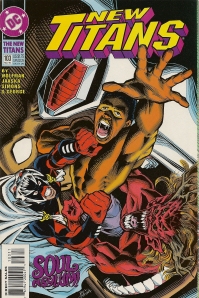 The last panel that the late Eduard Barretto ever drew for the New Teen Titans was of Victor Stone kissing the woman who was now the love of his life, Sarah Charles, as they entered a new phase of their relationship at the end of New Teen Titans #49.  So I guess it’s wholly appropriate that by the time we finally got around to resolving the Cyborg storyline, it’s Sarah Charles who has been watching over him and trying to help restore his mind, even going so far as to head to Russia for him back in New Titans #94-96, which was one of the stronger post-Total Chaos stories that rightfully featured two of the Titans’ strongest members.

Unfortunately, the storyline that sends this particular strong member off is one of the weakest in the latter part of Marv Wolfman’s run, and one of the lowlights during the post-New Titans #100/pre-Zero Hour period (I’d call it the Bill Jaaska era, but most of the issues featured here actually aren’t drawn by Jaaska).  Entitled “Terminus: The Final Fate of Cyborg,” the story builds on what was established at the beginning of “The Darkening” with the apparent return of Rita Farr and villains that were not really villains but weird beings of light, and then goes bi-weekly for issues #104-107 in order to wrap everything up in a timely manner.

But the story really begins in New Titans #102, where Sarah Charles is trying to restore Vic and brings in the Team Titans’ ethereal computer guy, Prester Jon (my second-least-favorite Team Titan, something I’ll get more into next time) to try to interface with him, kind of in the same way that the Justice League used to use The Atom to go waaaayyyy down to somewhere small.  Meanwhile, Pantha digs deeper into whether or not Dayton Industries had something to do with her origin,  Dick and Kory are having their issues and Gar fights a monster called Sinn while he also fights against what seems to be indulging the fact that he can only seem to transform into monsters.  At the end of the issue, Sinn is revealed to be an agent of Raven, who is also manipulating Councilman Quirk, the replacement for Liz Alderman–which begs me to ask, if she was going to ruin the Titans’ public image all along, why remove Liz Alderman from the picture?

But we will leave Gar and Raven, as well as Dick and Kory for another month and turn our attention solely to Cyborg, as Prester Jon spends most of issue #103 inside Cyborg trying to find Vic Stone.  He runs into a fair bit of trouble, even getting attacked at one point while the fake Doom Patrol members from “The Darkening” show up and reveal themselves to be denizens of a planet called Technis and that they need Cyborg in order to survive.  The next issue box promises two issues per month and a “hot newcomer” named George Napolitano on pencils, which at the time was promising.  If you read the letters column from this time (when there was one), you’ll see that there were quite a number of readers who really loved Bill Jaaska’s pencils and DC was clearly making an effort to show all of us doubters out there that he was a good penciller.  The problem was that I couldn’t stand him and when I saw that someone else was taking on the art for a couple of months, I was actually excited and I think that Harris and I actually wrote a letter to the editor complimenting the art.

Re-reading it nearly two decades later, one of the biggest problems with Terminus is that the art completely takes away from what could have probably been a halfway decent story.  In fact, just as with many bad runs of art on any comic book, it becomes hard to “see” the story unless you take the time to read closely.  And the story itself is … well, it’ll seem familiar after a while. END_OF_DOCUMENT_TOKEN_TO_BE_REPLACED

My Tweets
Join 861 other followers