There is a saying that is cliche by now:  “You can’t go home again.”  Entire songs have been written based on this premise; hell, there’s an entire genre of movie that seems to center around the idea.  And to be honest, even though the phrase is a cliche, it has a ring of truth to it–which really is the case with every cliche–and I guess it’s the raison d’etre of nostalgia.

I personally haven’t had a lot of “you can’t go home again” moments in my adult life.  For the most part, I’m not as blind to the trappings of nostalgia and can even say that I very often go in to rewatching an old movie or TV series skeptical about whether or not it holds up after 20-30 years.  But the one time I did have a moment like that was when I stepped into a Toys R Us.

Anyone over the age of 30 probably clicked on that video and went “Oh yeah, I remember this commercial.”  I grabbed this specific one off of YouTube on purpose because this commercial, which first aired in 1982, was run and rerun endlessly throughout the decade and featured three kids who would grow up to become notable actors and actresses:  Jaleel White (who played Urkel), Jenny Lewis (lead singer of Rilo Kiley), and Lindsay Price (who would be a regular on the later seasons of Beverly Hills 90210).  In fact, that series of commercials was so famous that the now grown-up kids (except for Urkel) shot another one in the mid-’90s:

And having a Toys R Us near you was a big deal back in the 1980s because they weren’t as ubiquitous as, say, Target or Walmart stores are today.  Sayville eventually got its own Toys R Us (though it was technically in Holbrook at the Sun Vet Mall) in the 1990s, but when I was growing up in the 1980s, my parents had to haul it about twenty minutes west to Bay Shore to go there, which meant that a trip to the store was a special trip and not just a part of some weekly shopping routine.

I’m pretty sure that store is still standing, but it has undergone the change that so many Toys R Us stores have undergone in recent decades:  it is now two stores in one–a Toys R Us and a Babies R Us.  This is the case with my local store, in Charlottesville, and when Brett was a baby, Amanda and I made a number of trips to the Babies R Us store.  Occasionally, we would venture into the Toys R Us side of things and I have to say that I never got over the feeling of disappointment that I had upon seeing how much smaller Toys R Us was compared to the one in my memories. 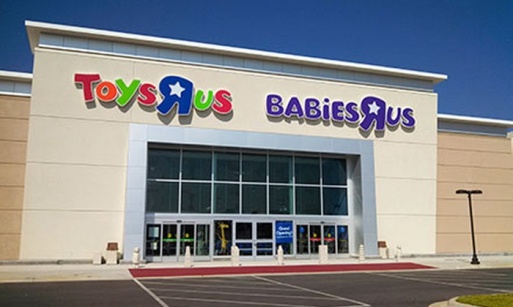 Most Toys R Us Stores look like this nowadays.

Oh sure, nothing is as big as you remember it being when you were a kid–hell, parts of Disney World seemed smaller to me when I was an adult compared to my childhood memories–but the reality versus my memory of walking into a Toys R Us was a disappointment because this was a store that my sister and I practically worshiped as kids, to the point where I had most the layout of the store memorized to the point where I can still picture it.

Think I’m kidding?  I drew the map below (on graph paper) from memory: 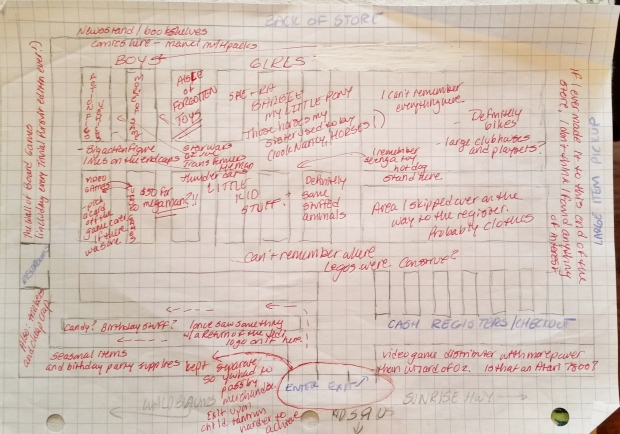 You’ll notice that according to the map I drew, most of what I remember clearly was on the left side of the store, and that’s because things like action figures and playsets were separated according to whether or not they were “for boys” and “for girls.”  I don’t remember if the “boys” area was blue and the “girls” area was pink, to be honest–in fact, I’m pretty sure that the colors were neutral–but I do have to say that when I posted a picture of this map a few months ago to Twitter, someone tweeted at me, disappointed that the genders were separated in a toy store.  Now, I’m the last person to reinforce traditional gender roles, but I have to say that … well, this was a toy store in the Eighties and not my own creation; and if you think of it, the way the toys were separated by gender probably had more to do with moving the actual merchandise than upholding gender norms.  You could put She-Ra next to He-Man and she may have sold just as well; however, put a random “girl with a horse” doll next to G.I. Joe instead of next to She-Ra and Barbie and that toy will get overlooked.

Anyway, exploration into the sexual politics of Toys R Us in 1986 when viewed by Twitter in 2016 over,  because even looking at this map a few months after I drew it (and then finally got around to writing this post), I can still vividly picture the aisles themselves, and what pictures I have found of the interiors at old Toys R Us stores on sites like Plaid Stallions shows that my memories aren’t too far off.  When you walked into the store, you were greeted by seasonal things and party favors, and I remember this was the case for a number of similar toy stores of the era, such as Play World or Child World.  This is where you got your tablecloths, napkins, cups, and whatever cheap crap that your mom was going to put in a favor bag for kids to take home–not all parents caught on to the idea of buying a few Marvel three-packs and calling it a day, which is still one of the better party favor ideas I’ve ever experienced (even if I did wind up with an issue of Secret Wars II).  There’s a note here that said I once saw something related to Return of the Jedi in this aisle, which isn’t hard to believe because Return of the Jedi merchandise was everywhere back in the early 1980s, but I specifically remember seeing the ROTJ storybook in hardcover and kicking myself for getting the softcover version through the Scholastic book club.  Not because the hardcover was cooler or anything, but because I had the storybooks for Star Wars and The Empire Strikes Back in hardcover and would have liked to have been consistent there.

Yes, even at the age of seven, I was anal-retentive about format.

But after the bathroom was this corridor of board games and video games, with an enormous, seemingly never-ending wall of board games on your left and an alleyway of video games on your right.  The board games wall is significant in its vastness as well as the fact that I remember that Toys R Us carried every single edition of Trivial Pursuit that was on the category card that came with the game, even the versions that you were pretty sure actually didn’t exist or were available in some mythical toy store that carried every obscure thing and was located in a small fishing village on the Atlantic coast of Canada.

Same with the video games, which had one of the more odd purchasing procedures, one that was more like a trip to the video store than it was to to the toy store.  The actual games weren’t on display; instead, there were cards with the covers from the video game boxes and tickets attached to each of the cards.  If the game was in stock, you would take a ticket and bring it to the register, where you would pay for it, and then you would go to another counter where an employee–who was behind glass–would go and get the video game for you.

I’m pretty sure that this was a shoplifting prevention tactic in the days before the scanner would be set off if you tried to leave the store without paying for the video game, and they did have high potential for shoplifting because the cost of the average video game was incredibly high (so high, in fact, that the New York State attorney general filed a lawsuit against game companies and won).

Speaking of pegwarmers, the two or three aisle of action figures were the heart of any journey through Toys R Us for me back in the 1980s.  Of course, as the decade went on, the “spotlight” toys changed, but the setup was always the same–there was an endcap full of action figures and an aisle of vehicles and playsets.  If I was with my mom or dad and was allowed to get one action figure (vehicles were for Christmas and birthday lists), the decision was usually easy because I had memorized which figures I had and which figures I wanted; however, nothing compares to the soul-crushing paralysis that came when you walked into Toys R Us with your $20-$30 worth of birthday money and were allowed to get whatever toy you wanted.  Because that meant a vehicle was a possible purchase or you could get multiple action figures, and if you didn’t come into the store with a plan, you took longer to make a purchasing decision than the average jury takes to reach a verdict in a murder trial.  That sounds pithy, but it was a major decision because you had to think of how much you were going to play with the toy and whether or not it would affect your standings in some sort of unofficial toy arms race that you were having with your friends.

Further complicating this decision was the Aisle of Forgotten Toys, which was where Toys R Us stocked all of the second-rate and more obscure toy lines, such as Remco’s Warlord figures and the line of Dungeons and Dragons figures that came out in 1983-1984, or my favorite “Did anyone buy these” toy line, which was the here-and-gone-in-a-flash-now-costing-an-arm-and-a-leg-on-eBay Matchbox Robotech line.  I had the same desire to look at all of those toys back then as I do grabbing random war, romance, or horror comics from 50-cent bins today.  And I suppose if I had some foresight back in 1986 or so, I would have bought more than one of those figures so that I could keep it mint in its packaging and make a few bucks now … but as with everything in that regard, I had absolutely foresight and those toys were lost to various purges.

I stopped visiting Toys R Us sometime in junior high, around the time when the NES was phasing out and it was becoming clear that I wasn’t going to be getting an upgrade to my video game system.  But those times spent in the aisles of my childhood had lasting effects, from that feeling of paralysis when given money to spend on CDs to watching my son go through the same purchase paralysis with his own birthday money (accompanied by my own attempts to steer him away from purchasing worthless crap he’ll play with once and then let collect dust).  Which brings up another cliche … “The more things change …” 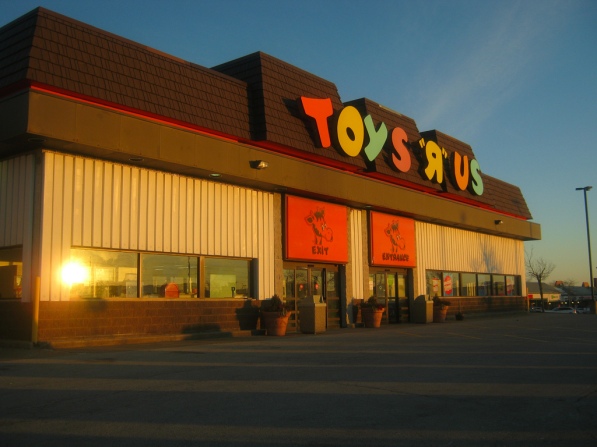 An old-school Toys R Us store in Bloomington, Indiana.  Image taken from Flickr.