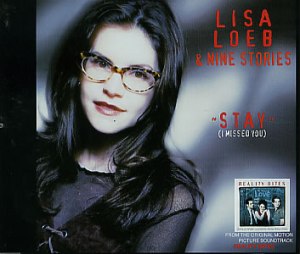 When I started this blog about a month ago, I expected to delve into those things in popular culture that I inexplicably like; however, I didn’t expect to get personal this quickly.

Lisa Loeb & Nine Stories’ “Stay (I Missed You)” came out in the summer of 1994 on the soundtrack to Reality Bites (a film that is my go-to film for any day which I have off from work and nothing to do — “Stay” plays over the closing credits) and hit #1 for a few weeks in August, when both the song and the video, which features Loeb walking around an empty apartment while emoting the lyrics, were more or less inescapable.

This wasn’t a song I was supposed to admit to liking.  I had spent the majority of my high school career trying to fit in with my friends’ love of heavy metal–in fact, at least a few of my friends from high school are still hard core Metallica fans.  I owned just about every Metallica album up to that point, plus had B-sides and rarities on mix tapes made from imports that my friend Brendan had spent an inordinate amount of money on at Middle Earth Records in the Oakdale shopping center.

Needless to say, rolling up at anyone’s house with this song on my Walkman would have been a huge mistake, kind of like the time I left a Righteous Brothers cassette in and someone grabbed my Walkman out of my book bag, listened to it for a moment, and gave me a look that said, “What the fuck is this?”  But I’ve always had a love of music that wasn’t total aggro and didn’t threaten to blow out my eardrums with every single distortion guitar chord.

I first heard the song on the radio when I was heading to visit a friend in Connecticut in early August 1994.  The friend, Kevin, was one I’d made on a trip I had taken to Europe at the very beginning of the summer and I was going to be staying with him so we could attend a mini-reunion of people from that trip.  Over the weekend, we went to a record store in his local mall and I bought the CD single, which featured the song as well as a completely acoustic version dubbed “The Living Room Mix.”  I think I listened to it on my sister’s Discman and then on a tape I’d made for my Walkman about a thousand times between the time I got off of the Orient Point ferry that Sunday and when I headed back to school for my senior year.

Listening to it now, it still holds up and holds its own against today’s female singer/songwriters.  In fact, I think I’d even put it up with “You’re So Vain” as far as breakup songs with women are concerned, it’s just that good.  The intro chord lures you in gently, as does the lilt in Loeb’s voice, but the lyrics are simply haunting.  “And I thought I’d live forever, but now I’m not so sure, you try to tell me that I’m clever but that won’t take me anyhow or anywhere with you” are some of best “anguish” lines I’ve heard.

I’m sure that my friends found this song annoying.  Lisa Loeb is not “hot” in the sense that she is the common topic of my generation’s fantasies like a Pam Anderson or Jenny McCarthy (yeah, I know they’re not singers but I honestly can’t think of a “hot” singer pre-Britney).  I’m sure that my friends actually wanted to smack the horn-rimmed glasses off of her face, actually.

But honestly, the thing that was attractive to me was that she was the “cute smart girl.”  You know, completely unassuming but just enough brains and talent to intimidate the hell out of you.  Not exactly Diane Court, because Diane Court was compeltely unapproachable.  Just … well, I would have never gotten past the friends stage with a Lisa Loeb, as much of a fit as I would have thought I was at the time, even if that was definitely me thinking I was more attractive than I actually was (or am, for that matter).

But I was a sensitive teenager who never really got or took much of a shot at anything and whose taste went beyond explosions and hard rock and fell firmly with John Cusack movies and ballads. In fact, whenever I want to get my “sensitive 1990s teenager” feelings going, I throw this song on.  And that’s one of the highest compliments I can give because I never was the type of guy to pretend to like something just because a girl I was into liked it.  Okay, that’s a lie because a girl is the reason I own a copy of Live’s Throwing Copper, but for the most part, I claim full responsibility for my own musical taste (or lack thereof).

There was a girl involved with this at one point, however.  Vanessa was my lab partner in physics during my junior year.  She was unassuming, very smart, and a nice person to spend time with.  If any potential for more existed, I honestly have no idea (and probably didn’t know then anyway).  Physics was one of my greatest nightmares in high school, an honors class that would have completely destroyed my GPA if guidance hadn’t turned around and let me and the other juniors take it pass/fail.  I sat next to her for most of the year and was for the most part a complete mooch when it came to lab data or homework answers.  That’s because when it came to physics, I was a complete idiot. Doc Dombrowski might as well have been giving all of his lessons in pig latin, I wouldn’t have understood a freakin’ word.

Anyway, in exchange for help in physics labs, I essentially became her bitch … well, as she put it, her “junior.”  It was the type of master-slave relationship that was kind of one big joke, and I’m sure there were times that I abused it wholeheartedly.  For instance, I spent one of our lab periods screwing around and recorded absolutely nothing in my notebook; the next day, when I approached her for help, she said, “What do you want, you little weasel?”

Considering I was nearly a foot taller than she was, her calling me “little” got a laugh.

Lisa Loeb came into play when we hung out here and there during that summer.  It was our theme song, in a strange way, because whenever we would drive around or what have you, it was always on.  So again, it became a running joke as so many other things did with so many of my friendships at that point in my life.  Incidentally, she was headed to the same college Loeb had attended, so we had that inadvertent connection as well.

I remember writing her a pretty sappy goodbye note in a card I gave her before she headed to college, which said something like, “No matter how old I get, I’ll always be your junior.”  It was the type of sentiment that was typical of me at 17, when I was incredibly sincere and probably took way too many things in life too seriously (or at least had a tendency to think each moment was worth a montage).  I don’t think what was written there is worth belittling, though, because she wrote me from college about a week later and thanked me for it.

I still have that letter, tucked in the back of my 1994 yearbook, and in it, she says: “It’s really strange here, everyone is so intelligent. I feel pretty stupid and ignorant, but it’s a lot of fun when everyone’s a dork of some sort or another — the people are genuinely interesting.”  Part of that line has, over the years, become a mantra of mine.  So in a way she’s indirectly responsible for all that you’re reading here.

I believe her birthday would have been this week; alas, she has been gone for a decade.  It’s hard not to get sentimental or maudlin with the “I always think of her when I hear this song” type of stuff, especially since I’m 33 and beyond the age where it’s appropriate to feel such a way over a pop song (with the exception of my wedding song).  But I do admit that now and again, when I listen to “Stay,” I allow myself a smile and a thought in that direction.