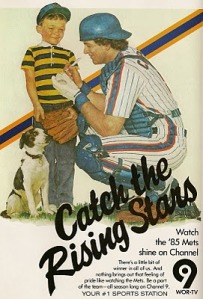 Unfortunately, work’s been crazy this week and while I had several things I’ve thought about covering I haven’t had much time to sit down and watch them or write about them.  So, I’m going to tease next week a little bit by showing you a commercial for the WOR Channel 9’s coverage of the Mets’ 1985 season.

The theme for that year’s series of promos was “Catch the Rising Stars,” which I guess meant that the Mets were on their way up to being contenders.  Considering how the year turned out, that’s probably a good slogan, just like “Baseball Like It Oughta Be” was a good one for 1986.

In addition to the promos, channel 9 produced a Norman Rockwell-esque poster of Gary Carter signing a kid’s baseball that you could special order with some of the proceeds going to the Leukemia Society of America, a charity Carter is heavily involved with.  My parents had the poster framed and it hung in their basement for years and I took it with me to Arlington, where I hung it in my first apartment.

Anyway, I’ll go more in-depth on the 1985 Mets and my first experiences at Shea Stadium next week.  For now, enjoy the promo.