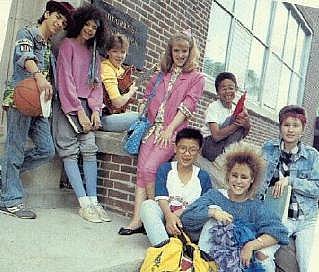 The Degrassi Junior High kids. Wheels and Stephanie are third and fourth from the left.

I didn’t have cable television when i was growing up.

To anyone older than me, this is not uncommon, but to people my age and younger (especially those that I have taught), not having cable and growing up with only seven channels is a completely foreign concept.  I am sure that some would even consider it child abuse that I didn’t get to watch the latest Stryper video when it ran 20 times a day in 1990, but in the grand scheme of things, it didn’t matter.  Oh, I suppose it did because I missed out out on most of The State and Remote Control when they first aired and several years’ worth of VMAs.  But for every video I didn’t watch, I caught another, way more important show, and that was Degrassi Junior High.

I don’t remember the exact day when I first watched Degrassi Junior High.  I know that I was in the fifth grade and it was probably in the winter or spring of 1988 because by the time school was out that June, I had already watched several episodes.  What I do remember, though, is that I more or less stumbled onto it because I was bored one afternoon and had tired of seeing commercials for the Craft-Matic adjustable bed on channel 11 between reruns of 1970s-era television shows.  So I flipped around and when I landed on channel 13–PBS–there was a scene of a boy and his father walking along a beach and talking about sex.  That was, as I discovered later, the midpoint of the first season episode “The Best Laid Plans,” which originally aired in March 1987.

“The Best Laid Plains” centers around two of the older students at Degrassi Junior High and how one date leads to pressure to have sex at a young age.  The boy, who I first met on the beach with his father while they had “the talk”, is Derek “Wheels” Wheeler (Neil Hope), who as I continued to watch and then became a fan of Degrassi in the following years, would be a major charcter in the show’s original run.  The girl is Stephanie Kaye (Nicole Stoffman), a major focus of the first season who is written out (or, “sent to private school”) by the beginning of season two.  Wheels is a pretty typical boy for his age, the type that your average junior high school boy can identify with, especially when he is happy to go on a date with Stephanie, who is known for not only being the class president but putting forth an image that she’s easy.  Every day, she shows up in rather conservative clothing but changes into much more revealing clothes in the bathroom.

She gets away with it, too, because her mom’s divorced and works to support the two of them and probably oblivious to what Stephanie tries to pull off every day–although to be honest, why she hasn’t received multiple referrals and calls home for dress code violations (and fashion violations … I mean, seriously, the stuff’s bad even for 1987) is beyond me.  The only person in her family who does know about her “double life” is her brother Arthur, who she probably keeps under constant threat of execution so he won’t tattle.

More than twenty years later, I can see what made me want to watch another episode of this show.  The plot was pretty easy for me to grasp at eleven years old, but at the same time it was a little more mature than what I was seeing on television at the time.  Seeing Stephanie tart it up when re-watching it for the first time was a little unsettling, although I don’t remember being very much attracted to her when I first saw it (then again, I was never very much attracted to girls like that), but I do remember identifying with Arthur.  I definitely was that naive, nerdy kid who didn’t know much of anything about the opposite sex aside from the filmstrips that we were required to have permission slips signed in order to watch.

I wouldn’t be immediately hooked on Degrassi, as that would take a few more episodes and figuring out that the show aired after school at a regular time.  And it would take actually being in junior high.  But my introduction came at a time when I was definitely starting to look beyond the kid stuff that I’d been so used to for so long.