When I look at what my son likes to watch on television and what he likes to play with, I am amazed at how similar we are.  Now, I don’t have a photographic memory from when I was 3-1/2–most memories from that age come in flashes and spurts–but right now he is really into superheroes and Curious George.  I am sure that we’ll have years of superhero awesomeness in our house (and that’s a whole other entry), and Curious George is definitely another topic for another day as well, although I do remember that when I was young I had several of those books that I read and decorated with stickers that told everyone that it belonged to TOM.

But he’s also really interested in space travel and when he first showed interest in it I was excited but I wasn’t sure exactly how to encourage that curiosity about space.  You know, beyond watching space shuttle launches on YouTube and a set of space-themed flash cards my wife found in the dollar bin at Target.  I mean, it’s a bit too early to get him into Star Wars because even that type of violence might be a little much for a kid who gets a little scared when watching Scooby-Doo (besides, I don’t remember seeing Star Wars for the first time until I was about four or five).  And while I’m sure that I will get around to The Saga, I was hard-pressed to find something until I was hanging out in the library at work and came across National Geographic’s Picture Atlas of Our Universe.

With a futuristic-looking spaceship on the cover, Our Universe is one of those library books that when I was in junior high I would check out at least a few times a year in order to pore over its pages, taking in every artist’s rendition and satellite image.  The edition I had in my hands on was from 1992, so it was later than the one I used to check out of the library but still accessible to even a very little kid and still awesome to me.

That space ship on the cover is sort of our guide through the universe, as the book’s narrative takes us on a tour through all of the planets of the solar system including Pluto (and I don’t buy that “Pluto’s not a planet” crap anyway), and beyond.  The beyond includes stars, asteroids, comets, other galaxies and the history of space travel as well as the possibilities for the future.

The title page, which leads to …

Open the book and the title flies at you kind of how the opening credits of Superman do.  But what makes this even more awesome on some level than seeing “Richard Donner” streak across a screen is that Our Universe does the title flight over the course of two spreads with the words nearly off the page on the second spread.  That, and it’s in Avant Garde and Avant Garde is just awesomeness in itself.

After an introduction, we learn about how ancient civilizations viewed the cosmos as well as how our modern scientific theories come to fruition through scientists such as Newton and Galileo.  it’s an encyclopedia’s worth of information being written in a pretty tight narrative that your average and elementary and junior high kid would understand and probably enjoy.  The examples rely on both scientific models and artist’s conceptions, something that’s carried throughout.

My favorite section overall is the tour through the solar system.  Not because not only are there then new-pictures of some of the outer planets such as Uranus and Neptune (based on what Voyager 2 was beaming back to NASA), but the astrological symbols of each planet are given along with illustrations of their respective gods.  Mars is shown dressed for war, Neptune has his trademark trident, Pluto is the shadowy head of the underworld, and Earth is represented by Gaea and her bountiful cornucopia.  In a way, it reminds me of the old-school future world of EPCOT Center, wherein every one of the different rides and exhibits had a symbol complete with a futuristic typeface.

An artist’s rendition of the surface of Pluto. The book is full of such representations.

There’s a fair amount of speculation in the book with the artist’s renditions of some of the lesser-known planets suggesting what a surface view might look like opposed to what we only know from the images that satellites have captured.  The facts and figures are also plentiful and demonstrates one of the great things about the book–the  author’s wanting to provide kids with an understanding of our solar system and the science and math involved without talking down to them.

Now, if the Sayville Junior High/Middle School library still has this book and still has the card from the old paper card catalog, you will see my name written at least three or four times over; however, I have to admit that even in getting the book out again to look through it with my son I have actually never read Our Universe.  Sure, I skimmed it when I found a topic interesting, but like just about any coffee table book, I spent my time with it looking at the pictures and reading their captions.  But I would slow down for the timeline of space travel and some of the chapters about space travel. 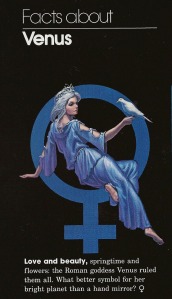 The goddess Venus with her astrological symbol on that planet’s information page.

I was really into Star Trek at that time and I thought it was awesome that in the future we would be able to go way beyond the reaches of the solar system and not only meet other civilizations but live on those planets.  National Geographic did not go as far in their vision as Gene Roddenberry, but they did seem to have grand goals for humanity.  Actually, it seemed that they wanted to make their future look “more realistic” and that meant not necessarily boldly going where no man had gone before but more like living and working practically in space.

The future, according to Our Universe, looks like the author expensed a viewing of 2001: A Space Odyssey and a trip to EPCOT for the purpose of research.  The “mining vessel” that will gather ore from asteroids resembles the Discovery, some of the space stations look like they have been taken right from the Kubrick film’s concept art, and the facilities of farming and industry illustrated are right out of Horizons or some other defunct EPCOT exhibit.  It’s a little silly in some parts and nearly twenty years after the edition I was reading looks like that “The Moon of Earth” film that Lisa Simpson’s class once watched.

I know that the outlook for interplanetary travel is pessimistic as of late, but I am still one of those people who holds out hope that humans will reach the stars in one way or another.  It is why I still check up on the Voyager probes from time to time, and why I get excited about a  manned mission to Mars even though that would take decades to accomplish.  Still, it’s incredible that one book can not only show how far we’ve come as a species but how much is really possible and I’m glad I get to share that with my son. 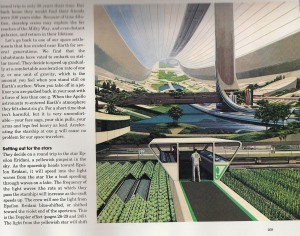 Is this the future? National Greographic seems to think so.