1994: The Most Important Year of the Nineties continues with one of the most Nineties of Nineties movies, Reality Bites.  I take a look at the Winona Ryder/Ben Stiller/Ethan Hawke classic and also talk about its place in popular culture as well as talk about why it failed at the box office as did so many other attempts ot market to “Generation X.”

Here are some links to some recent pieces about the movie …

Hit Fix interviews the principal players from the movie’s cast and production and they talk about what it was like to make it in 1993-1994.

A very funny Jezebel piece that waxes nostalgic about the film … with some perspective. 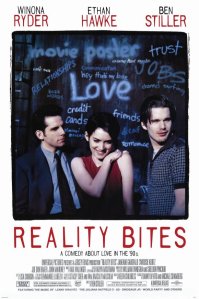 This post, actually my first column from my high school newspaper in the fall of 1994, is my seventeen-year-old self trying to make sense of my generation, especially after I watched Reality Bites on video.

In this post, I take a look at Reality Bites nearly two decades later and discover how much I identify with Ben Stiller’s character, Michael Grates, the yuppie In Your Face TV executive who competes with Troy Dyer’s (Ethan Hawke) for Lelaina’s (Winona Ryder) affection.