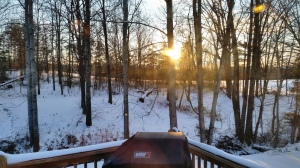 The view from my deck at sunset a couple of weeks ago. I probably should have zoomed in so the grill wasn’t in the frame.

I got the “schools are closed” call at 5:45 this morning and rolled back over, hoping I would get to sleep in.  I kind of did for the next hour or so, as I drifted in and out of sleep until I finally got up.  As I write this, it hasn’t started snowing yet–we’re expecting the rain to change over in a couple of hours–but there’s enough snow already on the ground for it to look dreary and dull. This is not the kind of winter that you are happy about in December when it’s almost Christmas; this is the kind of winter that you are absolutely sick of.

On a day like this, I have to listen to “A Hazy Shade of Winter”:

Time, time, time, see what’s become of me
While I looked around for my possibilities
I was so hard to please

Hear the salvation army band
Down by the riverside’s, it’s bound to be a better ride
Than what you’ve got planned, carry your cup in your hand

Oh hang on to your hopes, my friend
That’s an easy thing to say but if your hopes should pass away
Simply pretend that you can build them again

Look around
The grass is high, the fields are ripe
It’s the springtime of my life

Oh seasons change with the scenery
Weaving time in a tapestry
Won’t you stop and remember me at any convenient time?

Funny how my memory skips
While looking over manuscripts
Of unpublished rhyme, drinking my vodka and lime

The song was written by Paul Simon, and according to the Wikipedia entry (I’m doing some serious research here), it follows a hopeless poet who is unsure of his achievements in life and describes the dour mood that you would find in the latter part of the year, especially as fall transitions to winter.  But even in winter there’s a bleakness and for a group that is known for having a softer edge, Simon & Garfunkel give it a fair amount of angst and it’s probably harder than just about anything else they’re famous for.

In all sincerity, I’m surprised that this hasn’t been licensed by Pfizer or some other company as the theme song to an ad for Seasonal Affective Disorder medication or something because it just so much captures the anguish, frustration, and exhaustion of feeling like you’re trapped in the dead of winter, wondering if there is ever going to be a way out.  And could a song be any better for this or the situation more worse?

Ladies and gentlemen, I give you The Bangles:

This was the first version of this song I ever heard, spotting the very Eighties video on MTV during one of the many occasions I was hanging out at my friend Tom’s house in 1987 and watching music videos because he had just gotten cable and I didn’t have it at all (1987 was a huge year in that way; I probably should do an episode about it) and to me it’s still the better version.  Yes, synth intros like the one in this song can make the song seem instantly dated, but when those first guitar chords kick in, it’s such an ass-kicking moment that you cannot help but just getting sucked in.  Plus, it’s off of the Less Than Zero movie soundtrack so it has a built-in sense of despair, although this despair comes with anger.  It’s thrashy, sexy, and fun, and a reminder of why The Bangles are clearly one of the most underrated groups of the 1980s.

So as the rain turns to ice turns to snow turns to another day off from work turns to me shoveling the driveway turns to me really hoping that the warm weather arrives and is more consistent, at least I’ve got songs like this to be soundtracks to meandering blog posts.