The Autobot known as Huffer, who would play a more significant role in my childhood than it should have.

I am sure that in the annals of our toy collecting histories, there are toys that we remember so vividly and consider so important that the day we received them ranks as high as the senior prom, first kisses, and getting married. Okay, maybe that’s a bit of an exaggeration, but ask any child of the Eighties about Castle Greyskull, the AT-AT, or Optimus Prime and you’ll probably get an enthusiastic response followed by a wave of nostalgia appropriate to key toys to the era.

You probably won’t get the same if you mention Huffer.

If you’re unsure of who or what “Huffer” is, he was one of the Transformers “mini-bots,” a line of small, affordable Transformers that came out with the first wave of the toys in 1984. As most Transformers were sold in boxes, mini-bots were placed on cards and hung in aisles as if they were regular action figures, and although I don’t know their exact retail price, they probably cost as much. The most famous of the mini-bots was Bumblebee, who in his first incarnation was a yellow VW Bug (in the current iteration, he is a Camaro), but in that first wave, you had characters like Cliffjumper, the red car voiced by Casey Kasem on the cartoon series, and Huffer, an orange semi who was an Autobot that had very few appearances in the cartoon and seemed to be around when Optimus Prime needed someone to take his trailer. The times when he did have a speaking role or a spotlight, he was kind of gruff and obviously homesick for Cybertron. So for the most part, he was a supporting or background character.

Huffer as featured on the Transformers cartoon series.

But he was a supporting character who seemed to be everywhere. Huffer was the Transformers equivalent of Prune Face or Squid Head, a figure that seemd to come out for the toy line as a way to just suck more money out of our parents’ wallets but had little or nothing to contribute to the overall storyline. Plus, everyone seemed to have him because he was an “introduction level” transformer. Mini-bots were easy to transform (and probably easy to make) and were very cheap; therefore, they were ubiquitous in both toy stores and Christmas stockings. Optimus Prime, Megatron, Jetfire (Skyfire?), or Shockwave would set your parents back a decent amount of money and might require that they fight their way through a horde of shoppers in the early hours of Black Friday, but your lazy aunt could pick up Huffer on Christmas Eve and have money left over to buy Squid Head.

Most importantly, though, or at least to me, is a symbol. He’s the toy you got because you couldn’t get anything else. There were others like this in the line–Thundercracker was a blue version of Starscream, but still a pretty cool toy–but Huffer was relatively useless. Going to a toy store and walking out with Huffer meant that you were either a completist or it was a consolation prize. In my case, it was the latter.

In 1984, He-Man and the Masters of the Universe was still pretty popular, especially because the cartoon was still on the air and Mattel had started releasing action figure versions of some of the characters on the show. One particular character that got his own action figure was He-Man’s alter ego, Prince Adam of Eternia. Now, looking at that figure now, it’s kind of ridiculous that you’d want it–he was basically He-Man with purple pants, a white shirt, and a maroon jacket. I mean, it wasn’t even a good alter ego figure like the Super Powers Clark Kent figure. Still, I watched He-Man every day (and my sister would watch She-Ra) and there was a point in every episode where Prince Adam would hold aloft his sword and say “By the power of Greyskull … I HAVE THE POWER!” and transform into He-Man, then transform his tiger named Cringer into Battle Cat. Playing with my He-Man figures, I wanted to be able to “play” that transformation. Transforming Cringer into Battle Cat wasn’t hard–Battle Cat’s armor came off–but I had no way of transforming anyone into He-Man. 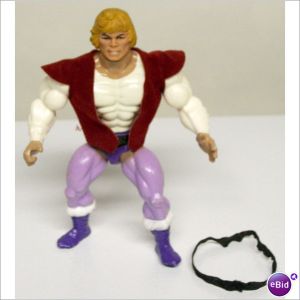 Prince Adam, the alter ego of He-Man. A toy that I broke down and cried over, something which defies rational explanation now that I think of it.

Until, that is, I first spotted Prince Adam in the toy aisle of TSS. It was in the middle of the fall and I had no idea that Prince Adam had been made into a figure and despite the purple pants and maroon jacket, I wanted him right away. I wanted to be able to take him, have him hold his sort aloft, say “By the power of Greyskull … I HAVE THE POWER!” and become He-Man (either original recipie or battle-damaged … I had both). I ran and got my mom, dragged her over to the aisle, and enthusiastically declared that I wanted the action figure and that I’d been a good kid and wanted it right then and there. Her response was something along the lines of, “Not right now but if you’re good, dad will take you back tonight.”

This seemed like a good enough response to me and we left TSS. My dad got home later that night and took me up to TSS because apparently I had “earned” my Prince Adam action figure. Remembering what aisle in the toy section it was found, once we entered the doors, I ignored the smell of fresh soft pretzels (which I lived for back in the day and to an extent still do) and made a bee line for the toys.

But it wasn’t here.

I began to cry, and my father probably got the same “Are you kidding me with this?” look that I get on my face when my son cries over insignificant things–only my son is five and I was seven at this time so you think I would have gotten over it by then–and he did what so many dads have done in that situation over the years, which is said, “Well, you can get something else.” Since TSS was not Toys R Us and what was there wasn’t much, so I grabbed which was the most readily available toy at the moment, and that was Huffer.

We went home, and while I did eventually get Prince Adam that Christmas, I never forgot that I missed out on my chance to get something because my mom had said, “Oh, we’ll come back later,” which is one of the most rookie fo mistakes you can make when shopping for toys, a mistake I’m sure I’ve made a few times these past few years (although my son doesn’t realize that). And every time I looked at Huffer, I thought of that moment and the disappointment I felt and how I made solemn vow to never let that happen again.

Okay, it wasn’t that dramatic, but the seven year old me hated that toy for that reason and nearly 30 years later I still kind of do.