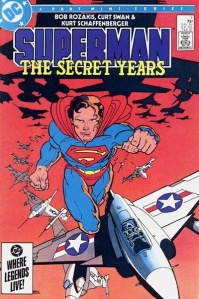 I honestly don’t remember when I bought my first comic book or what that comic was.  I have vague memories of perusing the magazine rack at Greaves stationary in my hometown and coming home with an issue of The Amazing Spider-Man or Superman.  At some point, I know that I got an issue of the Batman team-up title The Brave and the Bold sometime in the very early 1980s, so that might have been it.  But Superman: The Secret Years #2 was the very first comic book that I remember buying at an actual comic book store.

Amazing Comics, which is on Gillette Avenue in Sayville, NY, opened in the fall of 1984 next to an iron-on T-shirt store named The Special-T, which is where my friends and I procured most of our wardrobe.  I am sure that I was at the Special-T buying a birthday present for someone when my dad noticed that there was a brand-new comic book store in the next building (it had previously been a junk/antique store, I believe).  It was and still is an extremely small store with barely any room to move; in fact, I think if you fit more than six people in there, you’re exceeding maximum occupancy.  But at seven years old, an entire room filled with comic books blew my mind.  Who knew that you could sell them on your own and not off a rack located between the cigarettes and the pens and pencils? 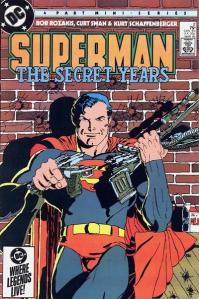 I probably froze at all of the choices, wondering which comic I wanted to buy, and I’m pretty sure it was my father who said, “Hey look, Tom, Superman: The Secret Years.”  Drawn by Frank Miller, the cover of the comic book had the man of steel crushing some machine guns while bullets bounced off of him, and he looked particularly badassed and resembled Christopher Reeve, who was the only Superman I knew at the time (and still the definitive Supes, in my mind).  Plus, with a title like “The Secret Years” and “A 4-issue mini series” banner on the top of the cover, and a promo poster that had a book with a Superman logo on it being “unlocked” with a key,  it looked like the type of story that was important.  So I bought it, and would pick up issues 1, 3, and 4 (out of order to the point where for a while I thought that #2 was #1 and then realized that the number of the issue was on the cover and there was an order to reading them).

Written by Bob Rozakis with pencils by longtime Superman artist Curt Swan and inks by Kurt Schaffenberger, Superman: The Secret Years tells the story of Superman’s time as a student at Metropolis University, which he entered while he was still flying around as Superboy and left as Superman; specifically, this story takes place during his junior year.  Issue #1 opens with Lex Luthor escaping from reform school by wearing shoes that have springs on the bottom (seriously) and the head of the reform school saying that he’ll get Superboy to catch him.  In the meantime, Superboy is trying to save a 747 carrying all of his friends from being shot down by a foreign country’s fighter planes that are piloted by … Ma and Pa Kent.  WHA?!

Okay, it’s a dream, because at this point in pre-Crisis Superman continuity, Ma and Pa Kent are dead and Clark is having recurring nightmares about their deaths, to the point where it’s waking up his roommate, Tommy.  Clark decides to watch some TV to calm himself down and writes in his diary until one of his other roommates, Ducky comes in drunk off his ass.  Oh, and Ducky is a long-haired hippie with a beard, so he’s definitely the type of college student who *gasp* drinks!  At the end of the issue, he’ll cripple himself in a drunk driving accident and that will pave the way for Clark to get a new roommate–Billy Cramer, a kid from Smallville who is kind of a combination of Pete Ross and Jimmy Olsen.  He knows that Clark is Superboy and will protect that secret, yet he has a signal whistle to let Superboy know when there is danger.

Issues 2 and 3 cover this for the most part, and Clark meets Lori Lemaris, a mermaid in disguise with whom he falls in love (and futhers his “L.L.” fetish).  Lex Luthor continues to elude both Superboy and the police, and in another subplot, Superboy helps investigate the disappearance of several boats and planes in the “Bermuda Triangle,” where he discovers a tear in the fabric of reality, finds those who were missing, and also discovers that they’ve built nice little lives for themselves in whatever alternate dimension they’ve wound up in and don’t want to leave the Triangle.

Back in reality, Billy gets the nickname “Shadow” because of his tendency to follow Clark wherever he goes, and quite frankly, is pretty whiny and needy to the point where he and Clark get into a fight and when Billy uses the whistle to get Superboy to come and talk to him about what’s wrong, Superboy goes off and has one of those classic “Superman is a Dick” moments.  At the end of issue 3, Superboy and Lori are saving Pacific islanders from a tsunami while Billy gets trapped in a burning building and then dies.

The major theme here, something that’s a huge part of the pre-Crisis Superman’s character (and I guess, to an extent, the post-Crisis as well) is that Superboy/Superman seems to be able to save everyone else but the people he loves.  Both sets of parents are dead, Ducky is in a wheelchair, and Billy is now dead.  So Superboy disappears into the Bermuda Triangle for a few weeks and has a temper tantrum on top of a mountain, then is summoned back into reality when Perry White and a policeman blow Billy’s whistle–which can he can hear thousands of miles away and in an another dimension.  They tell him that Lex Luthor is out there and has challenged him to a fight (seriously, Lex was able to give himself powers and commandeered the airwaves to call him out).  They fight live on television, and eventually Superboy wins and they have the following exchange …

Lex: All right, I concede.  You beat me, fair and square.  I’ll personaly tell the world I was defeated by Superboy.

Lex: Superman!  Yes, I guess it’s time you came of age!  Well, listen, man–just because you beat me this time … doesn’t mean there won’t be  a rematch.

Seriously, that’s it.  The Daily Planet starts calling him Superman and the plot wraps up, with Clark deciding he can’t live in the past, then graduating from college and getting a job at the Daily Planet.

It’s kind of a corny series, although I can’t fault Bob Rozakis because he was writing based on older material (in issue 1’s lettercolumn, there’s a lengthy back story on how the series came to be) and this was still a time when the main audience for a series like this was kids like me, instead of the teenagers and twentysomethings who make up the majority of today’s comics audience.  Plus, the pre-Crisis Clark Kent was always supposed to be something out of Archie and the Riverdale Gang, so when he’s walking around in a college sweater and the guys are pulling fraternity pranks on one another in an Omega House sort of way, it totally makes sense.

And for what it’s worth, I read the hell out of these comics because my copies are very beat up, with the back cover kind of rolling up to the front cover, and several cracks along the spine.  I was pretty into Superman at the time, too.  I had copies of Superman and Superman II, the latter of which I had taped off of the ABC Sunday Night Movie, Superman III was out on video, and Supergirl was in the theater (and I’ll probably write about that movie at a later date, considering that when I was seven, I had a huge crush on Helen Slater).  I was also reading The Man of Steel: A Superman Which-Way Book, which had been written by Andy Helfer.

Which-Way books were basically a poor man’s Choose Your Own Adventure line of books whose only strength was that it had a number of licensed characters in its titles (in addition to Superman, Which-Way had books based on Batman, the Super Powers cartoon, and Star Trek).  The point of that book was that Superman had a challenge from a villain–Luthor, the Toyman, Brianiac, etc.–and at the end of each page, you made a decision on … wait for it … which way to go.  And from there the adventure went on until you could start again.

Since Choose Your Own Adventure books were big with my second grade class whenever we had library time, I brought this book into school one day and Mrs. Holl read it to the class.  She then introduced us to our class project, which would be writing a letter to an author.  Most of the girls in the class wrote to Judy Blume, because we had read Tales of a Fourth-Grade Nothing, and at least one kid in my class wrote to Dr. Seuss.  I was one of a few boys in the class to write to Helfer.  My letter was polite, written in pencil on very wide-lined paper and I made sure to skip lines.  I talked about the Which Way book, but also about how much I loved that comic book series I had just read.  “I also liked Superman: The Secret Years,” I wrote, “when Billy died and Superboy cried.  I also liked when Pa Kent tore off Superboy’s ‘S’.”

I wasn’t the most articulate seven-year-old, but I finished the letter and sent it off.  Unfortunately, Helfer never wrote back and was the only author out of the three to not write back.  The girls got their Judy Blume letters and Sean Mullaney got a letter from Dr. Seuss that was written on Cat In The Hat stationary, but we never got any sort of letter with Superman on the letterhead or anything like that.  It was one of my first lessons in disappointment, and my first step into the worlds of comic books and fan mail.  Granted, with the exception of Transformers #5 and the occasional Superman or Star Wars comic book, I didn’t really start going to the comics shop every month until a couple of years later (and didn’t truly start a collection until about 1990) and wouldn’t write a letter to a comic book until New Titans #77 in 1991.  But I cannot deny the thrill of finding out a great secret about a great character.