One of my favorite aspects of Mad Men is the constant looks into the ad pitch meetings.  Maybe it’s because I used to work in sales support and marketing, but whenever Don or one of the other guys at the company is trying to get new business, I find it fascinating how they not only come up with their ideas but how they present it to the prospective clients.  Sometimes, it’s brilliant, and sometimes they crash and burn, like in this clip that shows the company pitching Pepsi on their new diet cola, Patio:

I think my favorite part of this clip is Roger Sterling summing up why the commercial doesn’t work:  “It’s not Ann-Margret.”

But I love soda commercials.  I don’t think I’ve seen that many from the era of Mad Men–the earliest ones I can remember is probably the “I’d like to buy the world a Coke” one from 1971 followed by David Naughton’s “I’m a Pepper!” ads and the Mean Joe Green one from 1978 or so–but I do remember that next to commercials for the phone company, McDonald’s, and Juicy Fruit, nothing in the non-toy category defined my childhood more than soft drink commercials.

And for good reason: they were everywhere in the 1980s, to the point where the last line of the last verse of “We Didn’t Start the Fire” is “Rock and roller cola wars, I can’t take it anymore!”  And by 1989, yeah, you’re right, Billy.  Because over the course of the decade, Coke and Pepsi seemed to be doing whatever they could to up the ante, especially when it became apparent that Pepsi was gaining in market share right around 1985 and Coke decided that its old formula wasn’t enough and launched the debacle known as New Coke.  Plus, you really couldn’t outdo Pepsi’s commercials in the 1980s.  I mean, they almost killed the King of Pop.  That set the bar impossibly high.

But as much as I have fond memories of watching the “Michael Jackson’s hair catches on fire” commercial on my old taped-off-TV copy of The Wizard of Oz from 1983, I have to say that one of my favorite 1980s soft drink commercials has to be this Coke ad from 1982:

Now you can picture this pitch meeting, can’t you?  “So, has anyone seen Fame?”

Like I said, it’s not the most iconic of Eighties soft drink commercials, but it captures the whole “youth feel” of the decade as good as anyone else.  We start with a rehearsal for a production that obviously has something to do with New York (yunno, because of the skyline background), and then it’s time to “take five,” which means obviously hitting the Coke machine located stage right.

I’d call b.s. on the fact that these kids would drink a sugary carbonated beverage on break and that there would be a Coke machine immediately off stage here, but I’m willing to suspend disbelief.

Anyway, the Bruno Martelli-type character sits at his piano while his friends gather around with their Cokes and he decides to play three notes …

From there, the blonde girl on the left–she with the Blair Warner haircut and makeup–immediately sings “Coke is it,” and the entire company is off. A manly guy in a tight jeans who is probably hoping to get some at the after party passes Coke around in a way completely different than most people think of when they think of coke being passed around a group of performers in the early 1980s, and … hey, isn’t that the French girl from Better Off Dead? 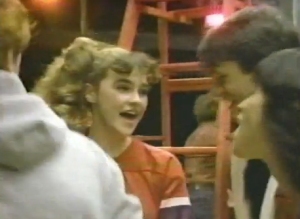 Why yes, it is.  If you’re surprised that Diane Franklin–who played Monique in Better Off Dead–isn’t, in fact, French (and I kinda sorta didn’t until I saw her in How I Got Into College), go rent The Last American Virgin.

Anyway, everyone’s really into it.  This is just so cool.  We’re teenagers in 1982 and we’re singing about Coke!  Look at us smile!  Look at this guy sorta  breakdance and do a split! Now for the big solo by the person in the company who seems a little bit older than all of us fresh-faced kids!

I’d joke about the sweater she’s wearing, but cowl necks made a comeback a year or two ago, so if someone were wearing this exact sweater right now, it would be ‘vintage.”  And it’s not like she’s Gabrielle Carteris-in-90210 old, but clearly we have someone who seems more mature than the rest of the people around her.  In fact, I imagine her phoning in every other rehearsal because she knows that she’s on the verge of something better and the phone call for that something better is going to come any day now, so she’s just biding her time with these kids.

And now, it’s time for the big finale!

I mean, it comes together so nicely that you would have thought that Tice Diorio choreographed it for the opening of next week’s So You Think You Can Dance.

The only thing that would have made this commercial more 1980s would be perhaps the presence of more neon, but this was ’82 and I think the over-bright color palette that we associate with the 1980s was at least a year or two away.  But really, it’s so Reagan-era, it’s not even funny.  Everyone seems to be happy and having a good time while subtly, lurking in the background, is the harsh reality of life.  After all, there is that scene in Fame where Coco meets that guy and goes up to her apartment for an “audition.”

Few soft drink commercials have transcended their original purpose quite like this one and captured the moment so eloquently.  I mean, when a soda commercial attempts to capture some sort of zeitgeist, usually we get crap like this:

I’d much rather hang with the cast of fake Fame.