The Kids R Us in the Nassau Mall in Levittown, NY.  Image from siteride on Flickr.

Based on the commercials from the decade, I wonder if today’s youth is under the impression that the 1980s were just one protracted neon-lit dance number.  There are several commercials from the era that were obviously a product of an advertising executive’s viewing a six hour block of Staying Alive, Xanadu, and Girls Just Want to Have Fun while hoovering cocaine because it’s the only way that anyone would think that kids singing and dancing their way through thirty seconds of television like they were auditioning for Starlight Express was cool.  And ridiculous as that protracted sentence sounds, so many of us fell for it, even to the point where we would willingly go shopping for clothes.

Now, hitting the mall for clothes at some trendy store may have been a rite of passage for teenagers in the 1980s, but when you’re a kid, clothes shopping can be agony.  I am not going to go through all of the details of what I was put through as a child except to say that I still only trust one person enough to accompany me when it comes to buying clothes, and that is my wife.  Otherwise, I go clothes shopping completely by myself or not at all.  But for a brief period in the 1980s, this wasn’t the case and that’s because Kids R Us opened up across from the Toys R Us in Bay Shore.

Existing from 1983 until it eventually went defunct in 2004, Kids R Us was the Toys R Us corporation’s foray into children’s clothing retail.  This, according to a New York Times article I found from 1983, was already a very competitive market and Toys R Us was taking a big risk, especially since they were going up against huge department stores like Macy’s.  From what I could tell, it worked at first because they were able to undercut their competition by offering some popular brand names at lower prices, and they made the stores themselves attractive to kids.  The NYT describes one of the original Kids R Us stores in Paramus, New Jersey, as “a place that seemed to blend the essential elements of an upscale children’s clothing outlet and a suburban theme park.”

And that much was true–the color scheme of the store was bright with kid-friendly “cool” colors, there were at least a couple of distraction stations where you could play games or look in funhouse mirrors so that you forgot for a moment that you were there to try on clothes and had gotten sucked into those awesome dance numbers on the commercials:

When you watch this, you can see that it’s vibrant.  Moreover, if you listen to it, it sounds like so many of the other commercials of the 1980s–in fact, I’m pretty sure that the “Kids R Us” song from this commercial is the same tune as the “Coke Is It!” ads from around the same time.  This one even has a similar start to the one that I looked at a number of years ago in that it begins with set design.  But then … then … THEN … it gets SO FREAKIN’ COOL.

These images are everything that was awesome about the 1980s:  killer sax solos, wearing leotards 24-7 and Sha-Na-Na cosplay.  People, these clothes weren’t your siblings’ or older neighbor’s hand-me-downs.  Oh no.  These were the clothes that you knew were going to make you be seen on the first day of school–that is, until you actually wore them to school and realized that you looked like a total moron.

Weep for your lack. 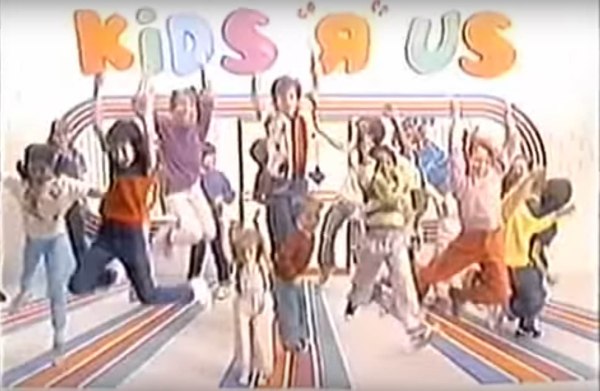 Anyway, the commercial goes on to show more kids dancing and showing off the clothes–there’s even a couple of dressed-up nerdy-looking kids in there because there was always one parent who was always on the lookout for a new place to buy slacks–and we get to the big finale.  Said big finale?  A freeze-frame jumping group shot, the type that leads us kids to believe that shopping at Kids R Us will be this fun, this exciting, and that we will want our parents to bring us there right away.  The reality, of course, was that we would walk into the store while catching a glance of Toys R Us and would spend the next hour wondering why we weren’t getting any toys.  It was all a cruel joke perpetrated by the lies of Corporate America and our parents, who for at least a few years found clothes shopping to be a little easier.