As I make my way through these very early days of buying comics, I see more and more how my purchases were influenced by other media.  The two issues of Transformers that I just looked at are prime examples.  Superheroes are another, as much of my early knowledge of the spandex set came from seeing them on television shows such as Super-Friends or Spider-Man and His Amazing Friends.  Another source was, occasionally, my dad, who liked Superman and was a fan of the Christopher Reeve films (at least Superman and Superman II).  That, of course, led to my purchasing all four issues of Superman: The Secret Years, and it led to my buying Superman #410.

This was another trip to Amazing Comics, sometime around my birthday in 1985 because while this issue came out that May, I remember seeing this and Superman #411 on the shelves at the same time, so it must have been right before Bob took the comic off of the main shelves and put it on the spinner rack near the door, which is what he did for all of “last month’s comics.”  It was a practice that he held onto for years and while I do have fond memories of comic book spinner racks and would love to own one someday, they do have an odd associate in my mind with comic book leftovers.

Okay, tangent over–or at least point of tangent, which is that my dad took me to the local comic store and said that he thought the cover to Superman #410 looked cool, so I decided to buy it.  Drawn by Klaus Janson, who at that point was known for his work with Frank Miller, the cover is certainly a dramatic one–Clark Kent is walking away from a screen where Superman is saying “I categorically deny the story Clark Kent wrote about in the Daily Planet–it is nothing but a pack of lies!”  If I may criticize it briefly, I will say that Superman does have a bit of a fat face and Clark’s suit looks two sizes too big, but the drama of Superman’s pronouncement and then the cover of the paper saying “CLARK KENT FIRED” was enough to pull me in and still makes me want to read the issue. 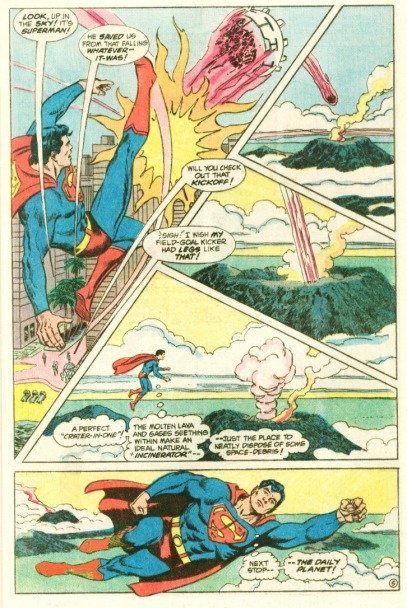 Superman saves a satellite.  Or does he?

What’s inside is the first of a really great three-part story arc that is one of those excellent late Bronze Age/pre-Crisis Superman stories.  We open with Superman saving a nuclear-powered satellite from falling to earth and blowing up, and then cut to Clark writing about it for the paper.  But the thing is, that satellite resuce never actually happened and once that is discovered, Superman finds himself being forced to deny the story, which gets Clark fired.  Superman, of course, is confused because he knows what he saw and knows what he did, yet when he flies to the place where the satellite fell from orbit, it’s still there.

Is he going nuts?  No.  This is all the machinations of Lex Luthor, who is messing with Superman’s mind from the confines of his lair, and he will just copntinue to do so until the end of issue #413, where he gets away because Brainiac recruits him to join a team of villains in Crisis on Infinite Earths #6 (Superman #413, by the way, is an issue I bought years later because it was an unofficial Crisis crossover).

It is, essentially, everything I wanted a Superman story to be when I was a kid, and exactly what i expect out of this time in the Man of Steel’s career.  Lex has an underground lair with henchmen and is planning supervillainy?  Check.  There’s romantic subplots with Lana and Lois?  Check.  Clark is secondary to Superman?  Check.  Granted, I would come to really love the FCTC-era Superman and I do consider that version to be my favorite iteration of the characters, but the “Oh, this would only happen on pre-Crisis Earth-1” feel of this particular issue is part of its charm.  Plus, it’s just a great setup and doesn’t feel like Cary Bates or Julius Schwartz were burning off stories prior to Alan Moore and then John Byrne.

Even the Curt Swan artwork, which I will admit I am hot and cold on at times, works well here.  Swan is inked by Al Williamson, whom I am most familiar with from Star Wars comics of the era, and his links, though pretty loose at times(although this may be due to the reproduction on the digital comic, which makes some of these old newsprint comics look like they are on baxter paper and it doesn’t always work), give Swan’s artwork more grace and fluidity than I’m used to seeing.  Then again, I’m not the most accurate judge of Swan’s art, considering I don’t have a lot of issues he actually drew.

But honestly, this is one of thosecomics that makes me with I had started collecting earlier than 1987, and that i had been experiencing the ed of the Bronze Age and the beginning of the Modern Age as it happened.  This was still a time when a little kid could pick up books and follow them even if he had little to no sense of continuity.  Although even a sense of continuity could not have helped my next book.