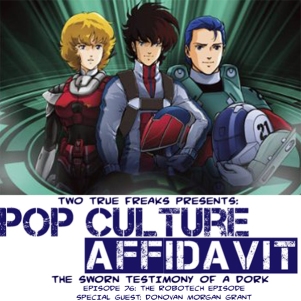 In the mid-1980s, one of the seminal anime series to ever cross over to American television was watched by children across the country. Combining mecha with a love story and an intergalactic war, Robotech was a sweeping saga that makes it one of the most memorable series of the decade. For this episode, I sit down with Donovan Morgan Grant (The Batman Universe, The Next Dimension, Questions No Answers) to talk about The Macross Saga, and then I come back and take a brief look at the Masters and New Generation sagas.

Here’s some bonus stuff for you to check out.

First, my 2010 blog post about the Jack McKinney novels, “Mecha, Minmei, and a Decade-Long Fight for the Future.”

The original (1980s) intro to the cartoon, featuring images from all three series:

The Toonami intro (h/t to Donovan for sending me the link):

The current intro to The Macross Saga (as seen on Netflix):

The current intro to the New Generation (as seen on Netflix):