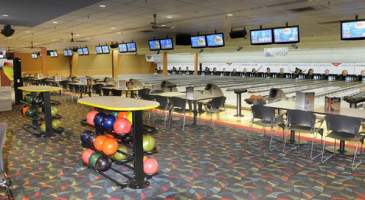 I went to a kid’s birthday party a few weeks ago.  Normally, these are held at one of those huge playland places that have ball pits, inflatables, kiddie habitrails, and that have names like Bounce and Play or Adventure Central.  This party, however, was at the local bowling alley, and as I watched my son bowl (well, more like drop the ball in the lane and rush back to the chair so he could see the computer animation), I couldn’t help but think of the number of bowling birthday parties I attended as a kid.

My birthday parties–and most of my friends’ birthday parties–were pretty standard back in the 1980s.  We’d go to the birthday kid’s house, play a few games, eat pizza or hamburgers and hot dogs, drink way too much soda, and finish off with Carvel cake.  Then everyone would go home with goody bags that matched the decorations–cups, plates, paper tablecloths, etc–for Star Wars, He-Man, or whatever the party’s theme was.  Sometimes, the party would be a sleepover and we would put the parents through hell because hours of fun and hours of soda and candy equals no actual sleeping at the sleepover.  The parties were straightforward and always fun.

But bowling parties were a reality and we considered them some of the most memorable at the time, even if they don’t measure up to the standards of today’s epic theme parties and play apparatus.  Bowling at a birthday party in the early 1980s was some of the most fun you could have as a kid for a few hours, and Sayville Bowl was the typical AMF bowling center whose decor would remain so unchanged for years that when I was in high school and college it seemed like 1979-1983 were being preserved for posterity.  I don’t remember being a particularly good bowler–it was a lot of gutterballs and not enough Superman III–but I remember having an enormous amount of fun anyway.